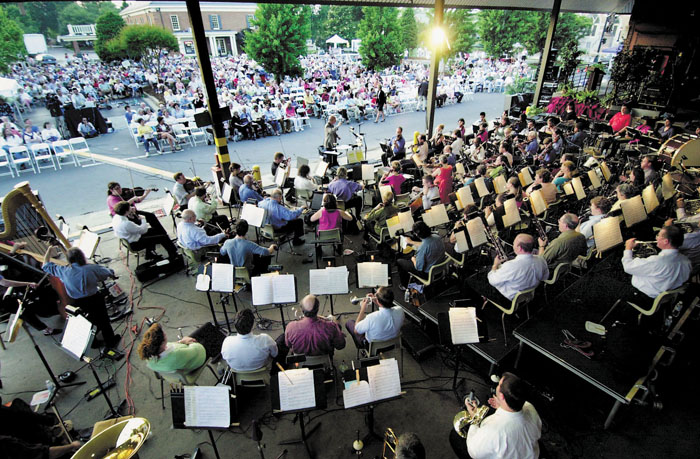 SALISBURY — Pops at the Post is set to make its in-person return on June 4 after a two year COVID-19 hiatus.

The Pops at the Post Committee expects a crowd of 3,500 to join this year’s celebration.

“We invite everyone to come out and enjoy the return of Pops at the Post,” said Audrey Eudy, who helps organize the event.

The last in-person Pops at the Post in 2019 was held at the N.C. Transportation Museum in Spencer. This year, Bell Tower Green will be incorporated into the event for the first time. The Salisbury Swing band will play from 5-6:30 p.m. and the Salisbury Symphony will begin around 7:30 p.m and will play for roughly two hours.

Some people arrive as early as 6:30 a.m. to set up their seating, while tailgating spots are made available starting at 1 p.m. for $125 (with $100 of that being tax deductible). Tickets can be purchased at www.eventbrite.com.

The Salisbury Swing Band’s performance at the amphitheater stage in Bell Tower Green will be followed by an intermission to prepare for the symphony’s “Rowan County’s Champions and Heroes” show around 7:30 p.m., celebrating community spirit and honoring those who have supported culture in the city. The symphony will perform on the loading dock of the Salisbury Post, so concert-goers can turn their chairs after the swing band’s set.

The tradition of the symphony’s collaboration with the Post challenges the orchestra to reinvent fresh performances every year. In 2020, the musicians presented excerpts of past performances in a virtual format for people to enjoy from their homes during pandemic. Pops went virtual again last year with three official online performances after the Sept. 11, 2021, event was canceled just before the symphony was set to perform.

“We’re very happy to have an audience again,” said David Hagy, conductor of the Salisbury Symphony Orchestra. “Performing in front of a camera doesn’t give the same excitement as having an interaction with the audience. We want to hear their applause and know they’re enjoying the music.”

The attendees of this year’s Pops at the Post are in for a treat with a unique setlist of pieces chosen by Hagy. To open the show, “Libera Me: Fanfare for Freedom” will be dedicated for the people of Ukraine. Hagy said the piece will serve as a reminder to the community that freedom is something often taken for granted while others fight for it.

Another special performance features an arrangement of Frank Sinatra’s “My Way” with six vocalists putting a spin on the classic. This rendition will be dedicated to the late Paul Fisher, who died in 2020 after endlessly supporting the Rowan County community. The piece was chosen after contacting Fisher’s son, Steve, to ask for a recommendation. Steve said his father was a big fan of Sinatra, and Hagy knew just the tune to include.

“We also wanted a song to show our appreciation to Rowan County philanthropists,” Hagy said. “Paul Fisher had a way of being supportive to our community and arts — his way. Supporting philanthropists is so important to our community. Without them, we wouldn’t have our ensemble, the theaters, the train station or the Gateway Building. That’s just naming a few.”

Fisher was one of the driving forces behind the construction of Bell Tower Green.

The orchestra also arranged an interactive segment for the audience featuring a medley of 20 well-loved movie themes. Hagy challenges the audience to quiz themselves with the five-minute piece by ignoring the program on the back of their fan to see how many they can recognize.