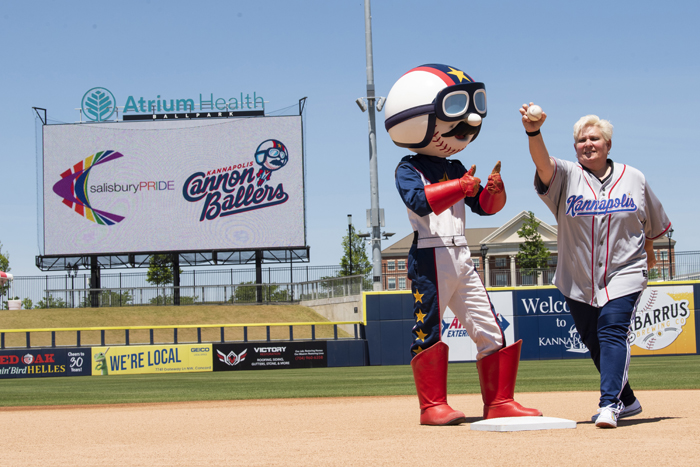 KANNAPOLIS — Tamara Sheffield, Salisbury’s mayor pro tem and a legacy board member of Salisbury Pride, has been asked to throw out the first pitch at the Cannon Ballers’ first Pride Night on July 6.

Sheffield recently met with Boomer, the Kannapolis Cannon Ballers’ mascot, to get some pitching tips.

“Boomer is so awesome. He is the best ally that Salisbury Pride could ever have. He’s also a pretty good pitching coach,” Sheffield said in a news release.“It’s quite an honor. I’m very humbled. I think it’s going to be fun.”

“The Cannon Ballers are proud to stand with and recognize the LGBTQ+ community in our region and throughout the country,” said Matt Millward, the Cannon Ballers’ General Manager. “This year’s Pride Night is aimed to be a celebration that brings our community together in a welcoming and inclusive environment.”

The game July 6 at 7 p.m. will be against the Carolina Mudcats. It’s also a “Bark in the Park” night. Fans can bring their dogs. A portion of sales will be donated to Salisbury Pride.

Tickets can be purchased online at www.
kcballers.com. Fans need to enter a code for the donation to be recorded: SALISBURYPRIDE.

“It’s pretty remarkable to have the Cannon Ballers step up in such an important and visible way for the LGBTQ+ community,” said Tim Coffey, Salisbury Pride’s board president. “The Cannon Ballers are sending a powerful message that sports is for everyone — both the fan and the player.”

The Cannon Ballers will be the first minor league baseball team in the Piedmont area to host a Pride Night. The team has created special Pride Cannon Ballers T-shirts that will be unveiled in June and available for purchase at the ballpark.