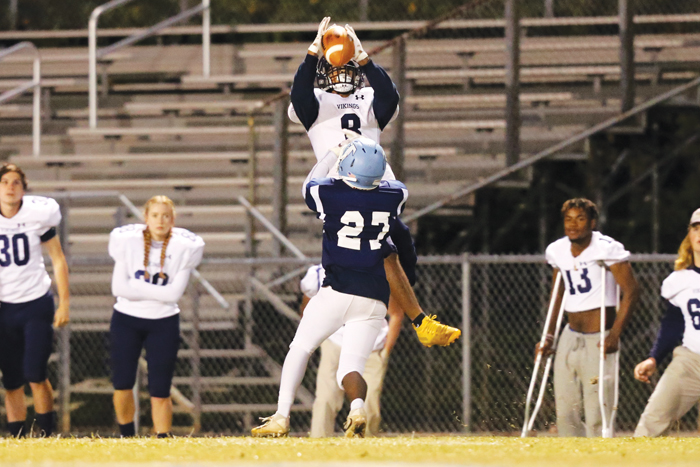 South Iredell’s Darius Smyre (8) pulls the ball in over West Rowan’s Nigel Mcmanus (27) at the West Rowan 30 yard line. After a score on the next play, West Rowan took complete control of the game. James Sipes for the Salisbury Post 10/18/2019

That didn’t happen — the Falcons dropped a late-season showdown with Concord and finished second — but the season was successful in other ways, potentially in ways more important long-term than a banner.

A half-dozen Falcons from the Class of 2022 move on to the college football ranks, where their skills and the teamwork and leadership lessons they learned on the field will help pay for their education.

One of those athletes moving on to the next level is Nigel McManus.

He beat some long odds to earn a college football opportunity at 5-foot-8, 160 pounds, but he could be a stout player for Division III Averett in Danville, Va.

McManus doesn’t worry about size. He’s confident, he’s tough, and he’s intense. He’s a bulldog who doesn’t back down. He covered some of the best receivers in the SPC without needing safety help and he tackled everyone in sight whether he was in the secondary or covering kicks on special teams.

He sparked the crowd and his teammates often. They’d see the little guy make a loud hit, and everyone got fired up.

“He was our leading tackler and it’s not often that a cornerback is going to be your leading tackler,” West head coach Louis Kraft said. “He played corner with a linebacker mentality. Most corners love to cover, but what he loves to do is tackle. He bullied a lot of wideouts. It was kind of fun to watch.”

McManus earned a reputation as a hitter, as well as a playmaker.

“He had a scoop-and-score touchdown against Carson in the COVID season (spring 2021) that was one of my favorite plays of my tenure,” Kraft said. “When we game-planned, we never had to worry about Nigel. He’s played a lot of football for us. We knew he was going to compete with the best every Friday.”

McManus had a two-interception game against Central Cabarrus as a senior.

“They tried to go over the top — and those long passes turned into picks,” McManus said. “We wanted conference, but we didn’t get it, and that was disappointing. It was still a pretty good season for me  — all-conference and all-county.”

West Rowan has a solid connection with Averett’s football program thanks mostly to JaVon Lofton.

Primarily an offensive lineman for the Falcons for Joe Nixon-coached teams, Lofton was converted into a full-time defensive lineman at Averett and developed into a highly productive all-league player in the USA South Conference. While Lofton has earned a degree, he still has a year of eligibility because of the universal redshirt from the COVID season and will be returning to Averett to play another year as a graduate student.

McManus made the decision to join Neal after Lofton showed him what Averett had to offer.

“Nice campus and I didn’t meet anyone who wasn’t nice,” McManus said. “The town (Danville) actually reminds me a lot of Salisbury. I visited other places, but Averett was the one I liked best.”

McManus is a solid student with a 3.2 GPA. He plans a sports management major.