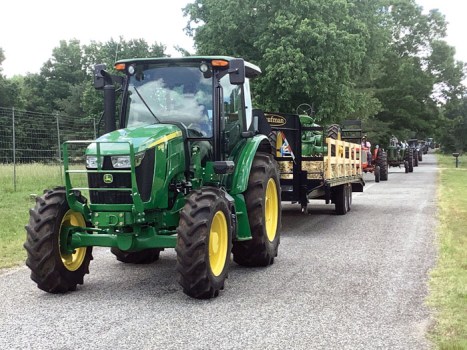 The tractors just kept coming on their way to lunch at Tom and Martha Smith’s farm. 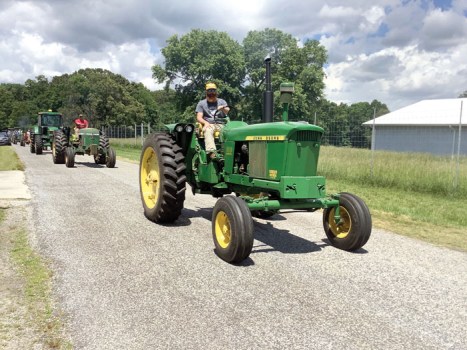 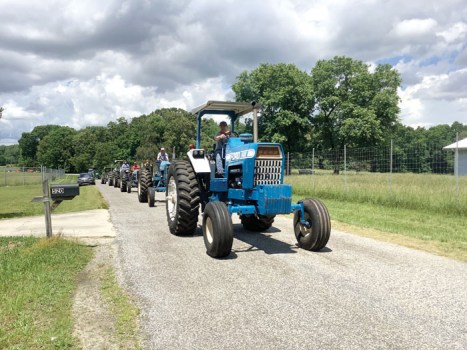 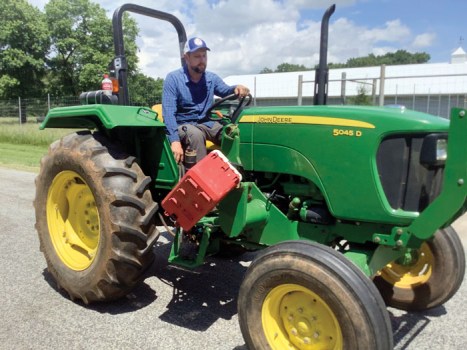 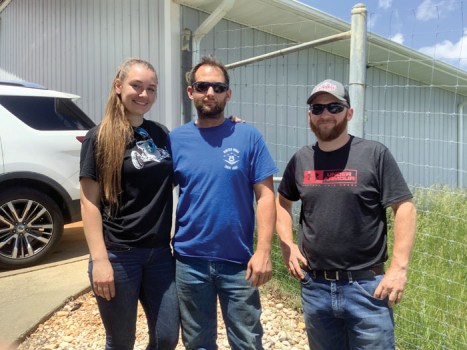 Consisting of about 35 tractors at the start, most of which were older and quite a few considered antique, the tractor parade left out from his family’s farm at about 9:30 a.m. Sloop’s plan was to lead the tractor tour over some 27 miles of West Rowan back roads.

“These guys and women are mostly local, although a few are from farther away. But all of us want to get youth involved and bring attention to preserving farmland,” he said. “There are lots of kids involved today, either with the tractors or watching them as we pass by. They need to know where the food comes from.”

Ben Haag, a neighbor of Sloop’s, added more perspective to the tractor adventure as the group stopped for lunch at Tom Smith’s farm. Haag said, “We’re having fun with our buddies and honestly, we are all big kids too! We lost a few of the tractors this morning, but no people. Next year, we want the event to be even bigger.”

Haag drove a 1950 Oliver 77, just one of his 27 antique tractors. He added, “I grew up around antiques and all this makes us feel young again.” Haag’s girlfriend, Holly Orel, drove a 1948 model Oliver 60 while his friend Joe Romanko drove a 1954 Massey Harris tractor. Orel said, “We love to see kids participating or reacting physically with this ride, instead of focusing on their phones.”

There was a strong West Rowan High School flavor to the event. West has four agriculture teachers, including Matt Owen. He started teaching in 2015, a career vocation that he never would have considered until Jason Chester asked him to consider applying for the job. As the instructor in West’s Ag Mechanic class, Owen had worked with his students on older tractors previously, but his latest project has caught a lot of attention. A 1967 John Deere 4020 was donated to the school and will be completely rebuilt and painted before being raffled off.

“We got it as a project for the kids with lots of hands-on stuff,” Owen said. “It’s an all-student activity while we contribute the parts and knowledge. The raffle will benefit the West Rowan High School FFA.”

Owen drove a John Deere 3010 that was his grandfather’s tractor, while his student, senior Macon Kluttz, drove a 1976 Ford 8600. Kluttz said, “There are lots of kids in class who don’t have any knowledge of agriculture and our ag classes grab their interest. For many, all it takes is getting started. As long as they have this tractor ride, I will be here. It’s wonderful to see people waving from out in the yard or from the porch as we go by.”

After an extended lunch and tour at Smith’s farm, each tractor drove back toward the open road with the drivers waving and thanking both Tom and his wife Martha, then the ride continued toward Patterson Farm Market and an ice cream stopover. Tom said, “We enjoyed having them here. We support getting the youth involved in agriculture and the group here today is making that effort.”

Sloop added that for the first time, he’s planning a “Plow Day” in the fall. He said, “This will be an event for the horsepower guys. We’ll just have to find someone who will let us tear up a field. And I expect we will have apple butter and a Brunswick stew. We are still working on the details and will share when we know.”