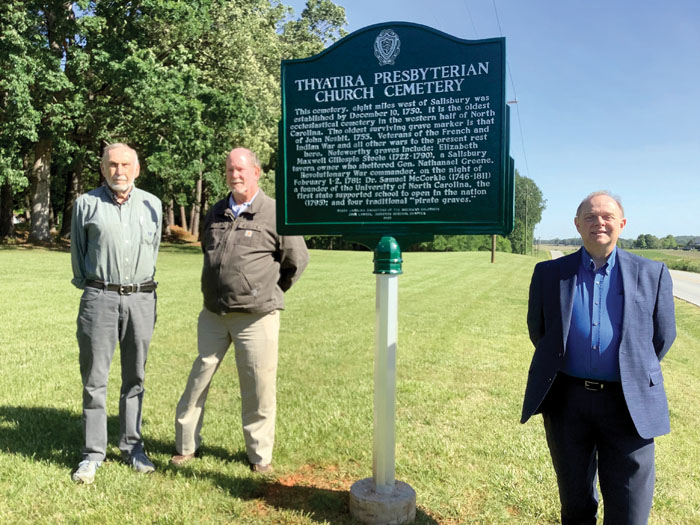 In a ceremony on Saturday, May 7, representatives of the Daughters of American Colonists visited Thyatira Presbyterian Church on White Road near Millbridge to dedicate a historical marker that was recently placed on the property. The John Lawson, Surveyor General Chapter, DAC paid for the marker and had it shipped to Thyatira several months back.

The Daughters of American Colonists Society was incorporated under the laws of the District of Columbia on April 25, 1921, and a federal chapter was granted to the National Society by the Ninety-Eighth U.S. Congress on Oct. 30, 1984. The  society seeks to be patriotic, historical and educational: to research the history and deeds of American Colonists and to record and publish them; to commemorate deeds of Colonial interest: to  foster love to the United States of America and its institutions by all its residents: and to obey its laws and venerate its flag, the emblem of its power and civic righteousness.

Thyatira Presbyterian Church historians Ed Hall and Glenn McCorkle participated in the ceremony and noted the long history of the church. Hall said, “When the DAC contacted the church, they already knew our history. Fredda Kimball and Mary Morrow were our contacts with DAC, and the Thyatira Memorial Association and the church session were very much in favor of moving forward.”

Scotch-Irish Presbyterians came from Pennsylvania down the “Great Wagon Road.” Through Virginia and into western N.C., they were looking for good and cheap land. McCorkle said, “The church that is Thyatira today was formed by one group of settlers that stopped in the area. Families bought and cleared land, built houses and in time, they built a place to worship God. Worshipers gathered in what  was called Cathey’s Meeting House. This happened in 1747, making Thyatira probably the oldest church west of the Yadkin River and one of the oldest in the state.”

Cathey’s Meeting House was also called the “Lower Meeting House.” The name was not changed to Thyatira until a later date, maybe after the Revolutionary War when Great Britain no longer controlled the churches. The present sanctuary, built in 1860, is the fourth building on the grounds. Even with the Civil War about to begin, Thyatira forefathers built a church. The current building is now in its 162nd year of use.

McCorkle added, “The recognition notes that the DAC knew that Thyatira and its cemetery are extremely old, in fact probably the oldest in western North Carolina. The cemetery was probably here before 1750, but the oldest marked grave is that of John Nesbit in 1755. Many early gravesites were not marked with a gravestone listing the deceased, and no one knows where they are located and when they died.”

Notables of those interred in the cemetery include four great-grandparents of the nation’s 11th President James Knox Polk. Many of Thyatira’s 35 or more men of the Revolutionary War are buried here. Elizabeth Maxwell Gillespie Steele who gave money and shelter to General Nathaniel Greene and Dr. Samuel McCorkle, Thyatira’s first ordained minister and a founder of UNC, lead a long list of notables buried here as well.

Hall also noted the location of the marker came after much thought. He said, “The other two historical signs for Millbridge are on Highway 150 and they haven’t fared too well. We wanted this sign located at the church in an area where it can be seen and read if anyone is interested. Glenn and I struggled to lift the sign, so we got three big guys from Locke Fire Department to help finish the installation.”

Wording on the marker reads:

This cemetery, eight miles west of Salisbury was established by Dec. 10, 1750. It is the oldest ecclesiastical cemetery in the western half of North Carolina. The oldest surviving grave marker is that of John Nesbit, 1755. Veterans of the French and Indian War and all other wars to the present rest here. Noteworthy graves include Elizabeth Maxwell Steele (1722-1790), a Salisbury tavern owner who sheltered Gen. Nathaniel Greene, Revolutionary War commander, on the night of Feb. 1-2, 1781; Dr. Samuel McCorkle (1746-1811) a founder of the University of North Carolina, the first state-supported school to open in the nation (1795); and four traditional “pirate graves.”

Other historical markers are located in  North Carolina at the first port of entry in Bath, the fort on Roanoke Island, Bethabara National Park on the Great Wagon Road among others and have been placed nationally since 1923.

Thyatira Pastor David Smith said, “It’s wonderful for the DAC to mark history in this way, important that the church and the cemetery are both recognized.”