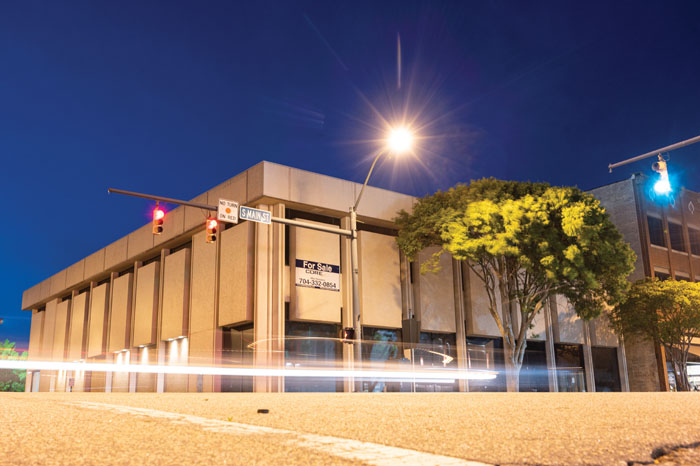 SALISBURY — The city of Salisbury is exploring the possibility of transforming one of downtown’s most prominent buildings into an event center and flexible office space.

During its meeting on Tuesday night, the Salisbury City Council approved entering into an option contract to purchase the former Wells Fargo bank building at 130 S. Main St.

The contract gives the city exclusive purchasing rights to the building for the next six months while it pays $10,000 per month. The total purchase price would be approximately $900,000 — the tax value of the property. The payments made during the six-month window would count toward the overall purchase. City Attorney Graham Corriher said during the meeting that the city has been negotiating the purchase for the past several weeks.

Mayor Karen Alexander said the option contract gives the city time to apply for a grant to pay for the building and determine if the building will suit the city’s vision.

The city would be buying the mostly-empty building from its current owner, Greg Alcorn, the founder and CEO of Salisbury-based Global Contact Services. Alcorn bought the building last year and rebranded it as 130 Parkview with the goal of transforming the space into a cooperative marketplace where a half dozen vendors shared space and sold products.

Those plans never made it past the design phase.

“I think I was a little ahead of the time,” Alcorn said. “The foot traffic is not there, but it’s coming. The residential growth downtown is coming, but it’s not there yet for something that would need to have as much frequency and traffic on an ongoing basis to make it work. That is my opinion. It made it to where the market, with the money it was going to take, was something a little too high on the risk-reward curve for my appetite.”

Alcorn did convert the parking lot behind the building into paid parking. Drivers can pay a small fee to park in the lot or buy a monthly pass.

Now that his plans for the building are shelved, Alcorn is now rooting for the city to bring its vision to life.

With the option contract now signed, the city is planning to hire a Charlotte-based design firm Neighboring Concepts to conduct an analysis of the building to determine the feasibility of turning it into an event center and flexible second-floor office space. The analysis would help the city determine if major renovations would be needed to make an event center happen.

“We are looking at it for the purpose of an event center as one possible use and also to house our Parks and Rec offices, which are not a huge number,” Alexander said. “But the second floor gives space for breakout if it is in fact a good use for an event center. It has lots of bathrooms, elevators going all the way to the roof. There’s a lot of study that’s going to go into it to determine the feasibility of it.”

The only current tenant of the building is Families First, a local nonprofit.

Alexander said the event center could be used to host conferences or rented out for private events like wedding receptions. The event center would serve as a downtown complement to the Salisbury Civic Center at 315 S. Martin Luther King Ave. Having a space for large gatherings near Bell Tower Green and not far from the Empire hotel, which is currently being redeveloped, would be beneficial, she said.

The 51 parking spaces in the lot behind the building are another reason why the city is interested in owning the property.

“(It) would give the city some needed downtown parking as well,” Alexander said. “When you look at it like that, it’s a real bargain.”

The city plans to pay for the building with a Rural Transformation Grant from the North Carolina Department of Commerce. The grant program, which intended to help local governments improve economic vitality through downtown investment and revitalization efforts, has an available pool of $48 million. Alexander said the grant would ideally cover the entire cost of purchasing the building.

Without the grant, Alexander said the city would not be able to move forward with the purchase of the building. In that case, the money paid on the building would be lost — a risk Alexander and city council are willing to take.

“We felt like it was worth the investment of a few thousand in consulting fees plus the money for the option,” Alexander said.

The city will apply for the grant this month and is expecting a decision in mid-summer.