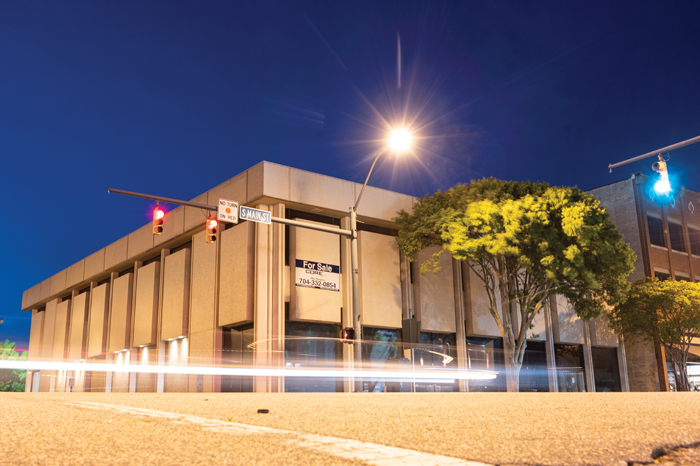 SALISBURY — Standing on the roof of the Wells Fargo building, Greg Alcorn was struck with an epiphany.

As he looked at what will soon be Bell Tower Green, Alcorn thought about what the park could become — a magnet that draws more activity and more people to downtown Salisbury.

Alcorn had just finished a walk through of the building below his feet, but it wasn’t until he was standing on the roof, looking over downtown and the burgeoning park, that he was sold on the property.

“It was looking back over the park and looking out over the other ways and hearing about the potential vibrance of the downtown,” Alcorn said. “I want to give them one more reason to come downtown. I thought ‘We can make this work.’”

“I looked at it and thought it would be important for the community to have somebody from the community invested in it and hopefully be able to do something that’s right for Salisbury,” Alcorn said.

The name of the limited liability company through which Alcorn purchased the property is 130 Parkview, a nod to the building’s physical address and its potential as a “gateway” from Bell Tower Green to Main Street.

Besides a handful of Wells Fargo advisers on the second floor of the building, the structure has been almost completely vacant since the bank closed its branch there in 2019. The bank left behind almost 25,000 square feet of space, split between two floors and a basement, and 51 parking spots behind the building.

Alcorn said he isn’t sure what will go in his building, but he wants to transform it into a place that brings value and energy to downtown.

“I don’t know what the building’s future looks like yet, whether it’s a market, or an entertainment center,” Alcorn said. “I don’t know. I’m going to try to get advice and wisdom from the experienced people in the community who know much more than I do about the vision for downtown Salisbury.”

What he does know, Alcorn said, is that it’s not going to be residential.

“It’s just not set up for that,” Alcorn said. “I’m told the bones don’t work for that.”

Although the building was constructed in the early 1960s and doesn’t lend itself to being turned into apartments, Alcorn said it’s still structurally sound.

“To get it up to date, it will need quite a bit of upfitting, but that’s expected,” Alcorn said.

Most of the inside of the building, he said, looks like a scene from the post-apocalyptic movie “Left Behind,” with desks and chairs still floating around.

Alcorn doesn’t have a set timeframe for when he hopes to fill the building. Alcorn said he’s open to ideas, including  transforming the space into a mixed-use building, with retail on one floor and office spaces on the other. Whatever goes into the building, Alcorn said, will be a good fit for downtown.

As for the parking spaces behind the building, Alcorn has a better idea of what those will become.

“I’m considering monetizing those,” Alcorn said. “It just can’t be free parking, at least not at this point.”

The parking lot behind the building became a hot topic as Wells Fargo left because cars were towed from the property after hours. Alcorn said he isn’t sure how he’ll monetize the spaces, but mentioned he’s mulling over monthly parking plans or implementing a mobile app pay-to-park system. Again, he said he doesn’t feel any time crunch.

“I’m on the calendar, not the clock,” Alcorn said. “I want to research models, get input from the city and merchants and then make it to where again it’s a model that’s community friendly, but not free.”