The Hatman legend continues to grow 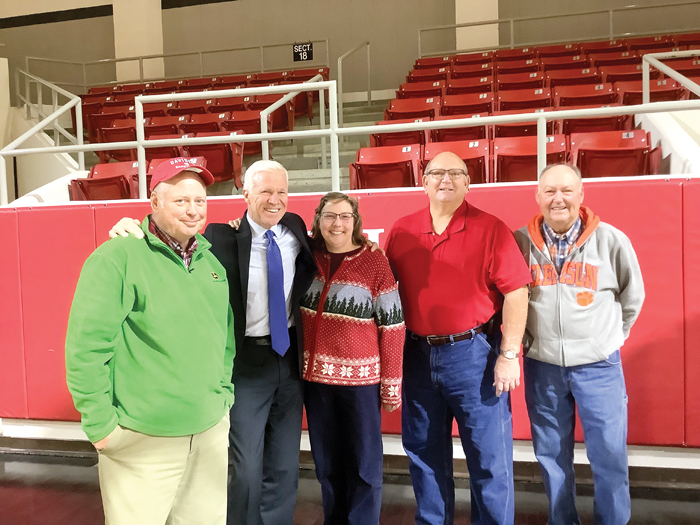 When a man of some importance travels, he is seldom alone. Charles Sloop knows the game, whether traveling to a Davidson basketball game or a planned lunch with just a few friends, several local farmers usually travel as his entourage. On a recent Wednesday morning, Charles didn’t think anything was unusual when long-time friends Jimmy Hoffner and Correll Hall picked him up and headed toward Mooresville with vague plans for lunch. Doug Patterson, another close friend, was busy with strawberry protection or he would have joined them. Charles didn’t think much of it when Correll kept driving past Mooresville and on to Davidson. He even sat peacefully and quiet in the back when they turned into the parking lot at Belk Arena at Davidson College. All four men are regular attendees for Davidson basketball games.

Charles gains notoriety daily as the “Hatman,” the recognized leader of the Hatville community on Highway 150 near the intersection of Back Creek Church Road. “It’s incorporated now,” he said.

After selling his dairy cows a while back, Charles suddenly found himself needing a pastime and an exercise outlet. Charles said, “Milking cows took a lot of hours every single day. When the cows were gone, I had to find a way to stay sharp both physically and mentally.” So, Charles started out hanging just a couple dozen hats from his pasture fence. He began to move them daily while adding more hats. Morning and evening, he walked the fence line, adjusting the hats and waving to traffic. People wanted to know what he was doing and why. They still do, as the collection of hats has grown to over 650.

Hoffner, Hall and Sloop walked into Belk Arena and Charles spotted his wife walking toward them. He became suspicious and said, “What is going on here?” Alice Sloop has worked for the Davidson College library for 22 years. Everyone walked down to McKillop Court, named for famed Davidson men’s basketball Coach Bob McKillop. Charles has attended Davidson basketball games for over 50 years, becoming hooked during the Charles G. “Lefty” Driesell era in the 1960s.

The hats on the fence saga continued with every hat Charles could find until he ran across his Davidson “Elite Eight” hat, remembering the year that Stephen Curry and an amazing team of underdogs shocked the basketball world time and again by advancing to the 2008 Elite Eight. Davidson lost to Kansas by one point in that game, and Kansas went on to win the NCAA Tournament Championship. Charles decided that this would be the one hat that he would not hang on his farm fence.

Coach McKillop headed up that 2008 team and he has a soft spot in his heart for it too. Charles noticed McKillop coming down the stairs to the court with a bag in his hand and they began to talk about early memories of Davidson basketball. They had never met before. Soon, a brand new autographed Davidson College basketball hat was in Charles’ hands, and for once he was at a loss for words. Coach McKillop knew the story of Charles’ favorite hat and rewarded him with another one!

The group took pictures and continued to share memories of Davidson basketball, hats and Charles playing volleyball at N.C. State. Annalyse Kitzberger, a Davidson senior volleyball player from Cleveland, Ohio, had been practicing her serves during the hat presentation. Seeing her chance, she ran over to meet Charles and present him with a Davidson volleyball shirt. Charles said, “Good thing that Alice had already left! I don’t know who was squeezing the hardest! That was fun!”

The group left Coach McKillop and Annalyse to their work and headed for lunch back in Mooresville at Corine’s Café, also on the way back to Hatville. As soon as Hoffner, Hall and Sloop were seated, Lisa, the waitress, asked Charles, “Are you on TV? I’ve seen you on TV. I’ve got a 70-inch screen and I know I have seen you!” The legend continues to grow.

Charles discussed some of the changes he’s making in “Hatville” but still was vague about what the future holds. He said, “I’m using heavy duty clothes pins to hold the hats now, especially in the wind. I carry the pins in a Food Lion bag as I go.” Hall suggested that he consider a nail apron, leaving both hands free to hang hats and wave to the traffic.

Charles wants more hats, saying that he needs to figure out a way to send his granddaughter to college. “Maybe a tip jar!” he said with his typical sly smile. But he cautions, “Just don’t bring any more of those Tar Heel hats like Paul Rogers did. I can’t give that thing away.” He proved it by leaving the hat on an outside bench at Corine’s for 90 minutes with no takers.

When asked about what the neighbors think of his hat activities, Charles said, “Oh, the neighbors pretty much ignore the hats, kind of like they do the owner.”

Lisa returned and asked Charles how he likes his milk, to which Charles replied, “Cold!” Lisa said, “Oh, just like a regular person!”

Speaking of legends, Hoffner said, “If Elvis wore a hat, he would have wanted one from Charles! There is never a dull moment around him, and he’s always got something to say. He’s a storyteller, but you don’t know whether it’s the truth or not!”

Charles chimed in with, “I’m getting emotional! It took me a long time to reach the pinnacle, but I could have just as easily gone into a shell. God’s in control of what happens with the hats!”