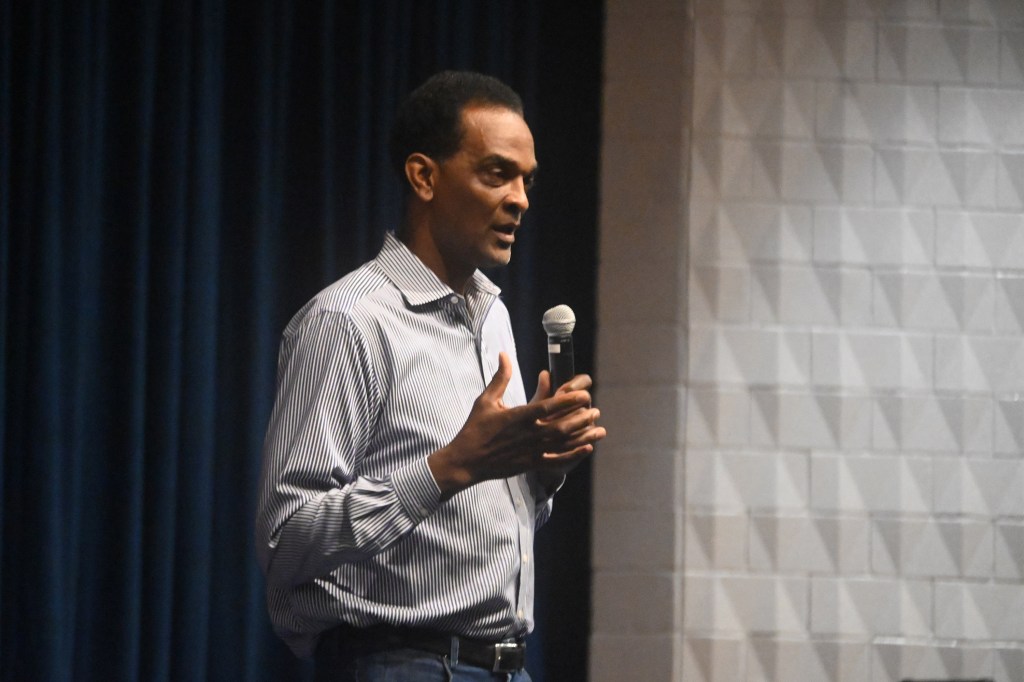 SALISBURY — Patrons at the Smoke Pit Restaurant knew something unusual was afoot because WBTV cameras were there, but they weren’t sure exactly what was happening until Ralph Sampson stood up.

It takes Sampson’s long, slim body about 10 seconds to unfold from a chair.  His hairline has receded a bit, but he hasn’t changed that much from his playing days.

Engaged in deep conversation with Sampson, Memories 1280 radio’s Ken Anderson squinted straight up at the tall fellow like he was searching the clouds for Superman.

The percentage of 7-foot-4 people on the planet is quite small, and Sampson, even at 61 years old, is every bit of 7-foot-4. He still stands erect with the posture of a soldier and the bearing of a diplomat.

He’s proud of his commanding size. He doesn’t slouch. By the time he was a 6-foot-7 ninth-grader, he had learned that he could use his unusual

height not only to dominate basketball games but to demand respect off the court.

That’s why Terry Osborne, Nanette Dillon and Marny Hendrick and the local ABC Board brought him to town as part of the ABC Upward! program. He joined former  ACC rivals Al Wood (UNC) and Gene Banks (Duke), among others, as speakers at the local high schools.

Sampson spoke to a captive audience at East Rowan on Tuesday afternoon where some of the youngsters may have seen him on highlight films or heard tales from their parents or grandparents.

There are plenty of tales that can be told about Sampson. He was a true unicorn, the first of his kind, the most heavily recruited player of his generation.

There had been many great big men before him, but never one that stood 7-foot-4 and also possessed Sampson’s skill level.

Sampson led his high school team in Harrisonburg, Va., to state titles, averaging 30 points, 19 rebounds and 7 blocks. Every college in the country wanted him, including UNC, which usually got who it wanted in those days.

When Sampson said two simple words at his commitment press conference — “It’s Virginia” — he transformed the basketball fortunes of that university.

Just about everyone except Sampson and Virginia head coach Terry Holland believed he would be a one-and-done in the college ranks, but he fooled a lot of people. He enjoyed the UVA experience and stayed four years.

Massive expectations always cast a long shadow. Sampson couldn’t have been much better as a freshman, but people always expected more and wanted more. It was a new world for Virginia. Normally viewed as a middle-of-the-pack team in the dog-eat-dog ACC, Virginia, which had veterans such as Jeff Lamp, Jeff Jones and Lee Raker, suddenly was ranked as high as No. 2 nationally in the preseason.

The Cavaliers fell short of their hype that season, but they did go to the NIT — and they won it.

“The ACC was tough,” Sampson said. “Tough, experienced teams everywhere, and rabid fans. In the ACC they love ya or they hate ya, and they loved to hate me and Virginia.”

Virginia’s NIT championship game victory in Madison Square Garden against Minnesota was epic and meaningful and program-turning. Minnesota had 6-foot-11 Kevin McHale, a future NBA superstar, as well as 7-foot-3 Randy Breuer, another first-round draft pick who proved to be a solid NBA player.

Sampson waged a fierce struggle with both giants. There were collisions of the big men that shook the rim.

“They beat the heck out of me,” Sampson said. “That’s when I realized I wasn’t ready for the NBA. I was going to get my butt kicked.”

Sampson is being modest. No doubt he got roughed up some by the Golden Gophers, but he produced 15 points and 15 rebounds in that game. He was tournament MVP.

He got better each year after that. He would be a three-time Naismith Award winner as national player of the year.

Only UCLA’s Bill Walton had achieved that before Sampson.

“Each year we’d take a look at going into the draft, and I was ready for the NBA after my sophomore year,” Sampson said. “But there always were better reasons  than dollars to stay at Virginia. It was a natural order. You couldn’t do it the other way. I couldn’t go to the NBA, change my mind about it, and then go back to Virginia. So, for me, it was going to be Virginia, and then the NBA.”

As a sophomore, he led Virginia to the Final Four. That’s where Virginia lost to a UNC team led by Wood, 78-65, in The Spectrum in Philadelphia.

Virginia was 30-4 his junior year, but the Cavaliers lost in the second round of the NCAA Tournament.

Virginia made another run in 1983 with Sampson aided by quick backcourt man Othell Wilson and players such as Rick Carlisle, Craig Robinson, Jimmy Miller and Ricky Stokes. Virginia got to the Elite Eight, but that was the team that lost twice in the postseason to an N.C. State squad that was certainly a team of destiny.

He was an obvious first pick in the NBA draft by the Houston Rockets. He averaged 21 points and 11 rebounds for Rookie of the Year honors.

The next season he was joined by Akeem (later Hakeem Olajuwon), forming a “Twin Towers” combination as talented as any the game has seen. Sampson had the agility and the skills at 7-4 to easily play power forward, with Olajuwon at center.

“Olajuwon was one of the best in the history of the game,” Sampson said. “His footwork was amazing.”

Sampson says his favorite moment from his NBA career was the twisting turnaround jumper that beat the buzzer — and the powerful Los Angeles Lakers — in a stunning 1986 playoff series.

But Houston would lose to the Boston Celtics, who had Larry Bird,  Robert Parrish, McHale and Walton operating in the front court, in the 1985-86 NBA finals.

Sampson’s buzzer-beater vs. L.A. topped even the thrill of being voted MVP of the NBA All-Star Game in 1985. He had 24 points and 10 rebounds in that contest.

While he looked superhuman and was featured on six Sports Illustrated covers in a short span, Sampson was still human.

Injuries plagued and limited his career. His last healthy season was 1986-87,  and he was finished in the NBA in 1991. What may have been a mind-boggling NBA career was reduced to merely outstanding by a series of knee surgeries and back ailments.

But he has no regrets. He gives back whenever he can.

He’s as healthy now as he’s been in a long time.

“I work out every day,” Sampson said.

He was glad to come to Salisbury this week, to hug old adversaries Banks and Wood, and to reminisce.

But he also came to share his experiences and his message with the youngsters of Rowan County. He grew up on a farm, so he knows what hard work is about. He’s seen a lot of life. He’s  been on top of the world, but he’s seen adversity as well. Knee and back surgeries are no joke.

He said he never gets nervous standing up in front of an audience and sharing his story.

And like Wood and Banks, he believes if he helped one student, then the trip to Rowan County was worthwhile.

“There’s a whole lot of life that comes after basketball,” said Sampson, who impacted Virginia’s program forever. “I’ve been talking for 30 years to kids about making good decisions.”