A marathon to be remembered forever 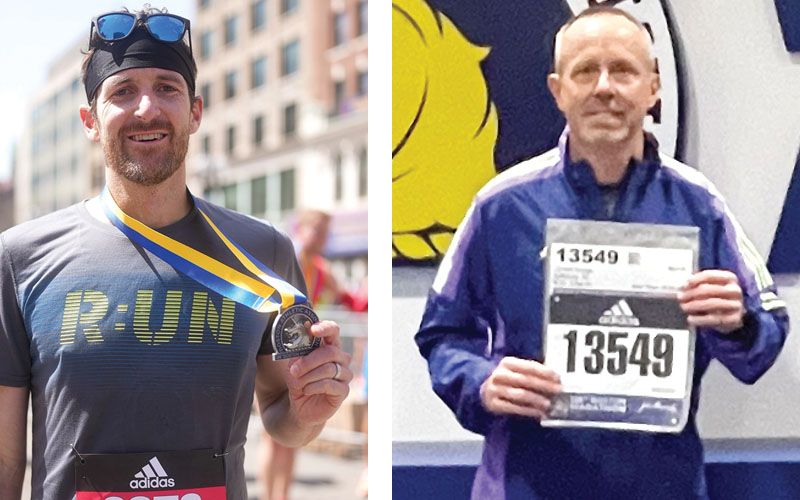 Two local men had different tracks on the way to last Monday’s Boston Marathon, both having become serious runners after focusing on other things for many years.

Dr. Matt Storey works at Novant Health and was a competitive swimmer in college and afterwards began running races. He said, “Having a running race or triathlon keeps me motivated to work out and exercise has also been good for my mental health as a great stress reliever. A couple years ago I thought it might be possible to qualify so I trained for the Tobacco Road Marathon in 2021 and qualified. So, Boston has been a bucket list experience that has been a few years in the making.”

Matt is 36 and moved to Salisbury from Michigan seven years ago. He trained in internal medicine and is a hospitalist, a doctor who specializes in care of acutely ill patients.

“The first thing I did when we moved to Salisbury was sign up for a local 5K. There I met Stu Stepp who introduced me to the running community,” he said before leaving for the marathon. “Training has been going well. I’m excited for the crowd and environment since I’ve never been in a marathon with so many participants or spectators. I hope the adrenaline will get me up Heartbreak Hill. We’ve made a vacation of it because I’ve never been to Boston. I’ll be going with my wife, sons, 6 and 4, my parents and another couple and their kids will come to cheer and tour the city.”

Craige Farmer had plenty to do as a parent and long-time staffer for Rowan County Parks and Recreation. He particularly enjoyed coaching his daughter’s teams as she grew up. About seven years ago, Craige joined a class for beginning runners offered by the City of Salisbury. He’s been on the move ever since, especially after joining the running scene later than most do. Craige is now 55 and a lifelong Salisbury area resident.

“I never thought in my wildest dreams that I would be doing the Boston Marathon,” Craige said. “I became interested after qualifying for the New York Marathon in 2019. To me, Boston has always been sacred and surpassing the strict qualifying standards is important. Others buy their way in or do the race virtually and that isn’t for me.”

After qualifying at the Oak Island Marathon, preparation was going well until Craige experienced some calf/piriformis issues about two weeks ago. His daughter, Elisabeth, is an athletic trainer and helped him work on those issues. “I just want to run a steady race and finish,” he said. Craige traveled with his wife Frances, taking some extra days for sightseeing.

Patriot’s Day in Boston on Monday dawned clear and chilly with temperatures in the low 40s, perfect running weather for the 26.2-mile course. Matt and Craige took buses to Hopkinton and waited for the wave starts that totaled over 28,000 official runners, preceded by the wheelchair racers and elite runners. They didn’t see each other before, during or after the race.

“I thought the weather couldn’t have been better,” Matt said. “I listened to some experienced Boston runners for tips and watched many of them take off old sweats and warmup clothes and donate them to charity just before the start. An announcement was made that over half a million pounds of clothing had been donated to charity by the Boston Marathon. I especially enjoyed each little town we passed through. It seemed they were competing with each other to get our attention.”

Special memories were the halfway point at Wellesley College where the coeds made a tremendous amount of noise as the runners passed by and climbing the Heartbreak Hills. “My goal was to run up all three without stopping and I did it,” Matt said. Those three hills are significant, especially coming between the 16- and 20-mile points on the course.

Craige’s training was going well this year with new personal bests in the half marathon and Winter Flight 8K. “I truly appreciate all the help and advice given to me over the years by all our local runners, especially my buddy Stu Stepp whose positive attitude has encouraged us all,” he said. (A story is pending on Stepp and his recovery from challenging health issues).

Craige began the race running well until he heard a pop at Mile 10. He experienced a serious Achilles and calf issue with still 16.2 miles to go and the real battle began. While most runners would have stopped, he continued to hobble on. he said, “I had asked our church to just pray for me to finish. At this point, I began to pray to just make it to the next aid station. Two miles at a time and then it was on to the next aid station. I eventually hooked up with two Marines who were hobbling. My pace was very slow, but the energy of thousands of spectators kept me going. My daughter said I was just too hardheaded to quit!”

Matt finished with an official time of 3 hours, 19 minutes and 4 seconds. Farmer pushed through his injury to finish at 4 hours, 18 minutes and 25 seconds. Both are considering a return to Boston and other marathon options too, and both were ecstatic with the Boston Marathon experience, especially the kindness and welcoming nature of the city and event volunteers.