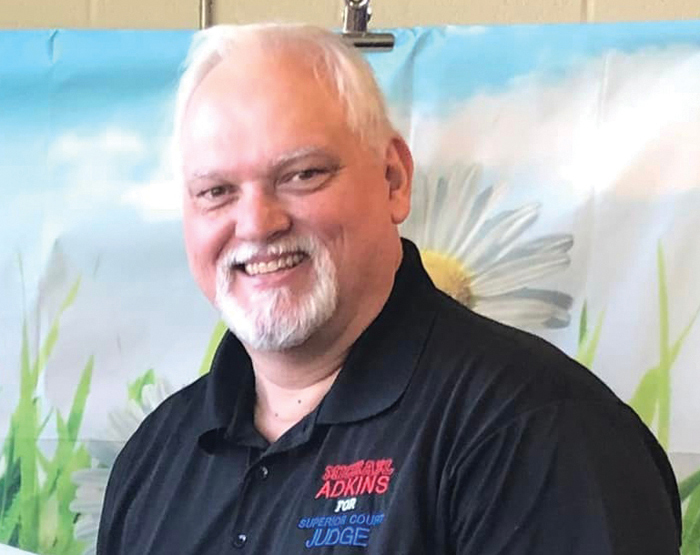 He won it when he was just a junior in high school. Playing defense attorney in a mock trial scenario, Adkins argued the case so well that a jury composed of classmates found his client not guilty.

“It seemed like I was fairly a natural at that,” Adkins said.

The next year during a similar exercise, Adkins won again as the prosecutor.

Those experiences inspired him to pursue a legal career during which he’s won many actual cases inside the courtroom. Adkins has been practicing law for more than 30 years and has been practicing in Salisbury since the early 1990s. He’s now hoping to take the experience he’s accumulated over his career and put it to use as a judge.

Adkins, a shareholder and practicing attorney with Adkins Carter P.A., is running for Rowan County Superior Court judge against fellow Republican Tim Gould. Gould has held the position since he was appointed in June to finish the remaining term of Superior Court Judge Anna Mills Wagoner. Gould and Adkins recently participated in a candidate forum where they discussed how they’d approach the position.

Early voting starts on April 28 and the primary is on May 17. Absentee by mail voting is currently underway.

Born in Kentucky, Adkins grew up in West Virginia before returning to his home state to attend Berea College. Adkins went on to Wake Forest Law School before again returning to his home county to work as a prosecutor. Missing North Carolina, Adkins returned to the Tar Heel state and eventually landed a position with Wallace and Whitley in 1992.

“It sounds like a lot of moving around, but a lot of those moves I never left my chair,” Adkins said.

After handling mostly criminal cases early in his career, Adkins changed his focus to civil litigation. He compares his shift in interest to his sports career.

“Football came a whole lot easier to me than basketball for, I guess, probably obvious reasons,” said Adkins, who is hard to miss at 6-foot-4. “I think I liked basketball more because it was more of a challenge. It didn’t come as easy … I think that may be why I began drifting more toward preferring civil law, just because I had done criminal work and so much of it seemed natural.”

Adkins said he has “bookend” cases, a feat not many other attorneys have accomplished.

Looking back at his career thus far, Adkins started to feel like he’d done most of what he wanted to do as an attorney.

“You get to a point where you’ve done all of this kind of stuff and you say, ‘OK, now what?’ That’s kind of why I’m running for office is that I’ve got to that point,” Adkins said. “I have all of this experience in all these different fields. I just look at that and go, ‘I could take all of that and put it to work in the courtroom.’”

Consulting with friends and family, he started considering a run for Superior Court judge. But it was ultimately a vote of confidence from former Rowan County District Attorney Bill Kenerly that convinced Adkins to put his name in the hat.

“If Bill Kenerly thinks I can do it, then I probably can,” Adkins said.

If elected, Adkins said he’d like to set the tone for the entire courthouse.

He’d said he’d also like to efficiently work through the backlog of court cases, both of the criminal and civil variety, by helping clarify communication between judges and lawyers about scheduling.

One reason why Adkins covets the Superior Court judge position is because of the potential to serve on a three-judge panel selected by the North Carolina Chief Justice to decide the constitutionality of laws. A three-judge panel recently decided North Carolina’s new congressional and legislative election maps. Adkins said he’d provide the vantage point of a “conservative Republican.”

Adkins has been married to his wife, Cindy, for 38 years and they have two grown children, Nick and Lydia. Cindy is a retired Rowan-Salisbury teacher with 30 years teaching experience. Nick served as a Navy pilot and is now a financial adviser for Raymond James. Lydia is a curriculum coach for Rowan-Salisbury Schools. The life experiences of raising children, as well as taking care of aging parents, would help him on the bench, Adkins said.

Adkins is a member of Wyatt’s Grove Baptist Church where he has attended since moving to Rowan County. He serves as a deacon, church moderator, Sunday school teacher and sings in the choir.