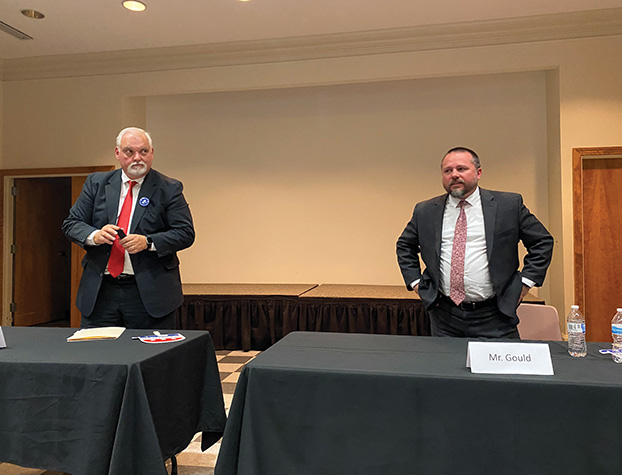 SALISBURY — Two candidates running for Superior Court judge described their experience, detailed their approaches to the bench and discussed ways to cut down on the current backlog of cases during a Rowan County Republican candidate forum on Tuesday night.

The candidate forum is one of several being hosted by the local party leadership ahead of the primary. Early voting starts on Thursday, April 28 and the primary is on Tuesday, May 17.

Tim Gould is seeking to retain his seat after being appointed senior resident Superior Court judge in June following the retirement of Anna Mills Wagoner, who was the moderator for the Tuesday night forum. Michael Adkins, an attorney who has been practicing in Rowan County since 1992 and for several years before that, is running against Gould for the seat. No Democrats filed to run.

Both candidates said they are running for the position because of experience, but each meant it differently.

Gould says he sought out the appointment and is hoping to keep his seat because he has been in the courtroom with judges who did not take their job seriously. Gould said he wanted to do the job, not just have it, which he said is “a big difference.”

“There were too many times where judges either didn’t care what the law was, didn’t know what it was and didn’t care to figure it out, or, just didn’t care about doing the job,” Gould said.

Gould said he’s already proven he is dedicated to the position by doing extensive research on the court cases he has overseen thus far.

Adkins said he’s amassed a wealth of expertise in the three decades he’s practiced law and he wants to put it to use.

Neither candidate has run for a judicial position before, although Adkins did make a bid for Board of Education more than a decade ago.

In Superior Court, judges preside over criminal cases and complex civil cases. Adkins said he’s got plenty of experience in both, but particularly civil litigation.

“I have a reputation in this county as being an attorney who knows his way around a complex civil case,” Adkins said. “If you ask the lawyers here, they’ll tell you. I’ve handled complex civil cases for many, many years. For decades, in fact. I have handled everything on the civil side I think you can do.”

Gould, who worked as a prosecutor for about 16 years prior to being appointed to judge, highlighted his expertise handling criminal cases.

“In criminal court, I’ve handled pretty much everything there is, almost,” Gould said. “I’ve handled thousands of cases, many, many jury trials. Everything from murder cases all the way down to speeding tickets because every case is important.”

While Gould said civil cases are just as important, he contended that 99% of decisions a Superior Court judge makes are in criminal court.

The two candidates not only talked about their qualifications, but also discussed the approach they would take to the bench. When asked to identify current obstacles that could impede the delivery of justice, both candidates pointed to a lack of resources as a dilemma while also mentioning the current backlog of cases currently facing the Rowan County courthouse. Each candidate expounded upon ways they would seek to cut down on that waiting list of cases.

Adkins said he’d get the local bar involved and seek to work through and dissipate animosity that has built up between prosecutors and defense attorneys from cases being continued and delayed so many times. He mentioned his experience as a mediator, which would be helpful in situations such as that. Adkins said he’d get involved in solving the problem and pull together people involved to form a plan to move cases through the system more efficiently.

“You have to be involved and you have to show some leadership,” Adkins said.

“What I’m planning on doing with the numbers I just received is to get together people who are stakeholders in the system, the DAs, the bailiffs, the defense attorneys, the other judges, the sheriff, the clerks, and figure out a way to communicate together to fix the problem,” Gould said.

Gould said he plans on creating a continuance policy that “everybody is on board with” to dispose of cases more efficiently and said he’d use any extra time in his personal schedule to tackle cases, the latter of which Adkins also said he’d do. Gould said he will use a new data tool to identify cases that have been waiting for a long time and meet with the attorneys involved to determine why they haven’t moved forward.

When asked for their stances on “activist” judges versus “restrained” judges, both candidates said they would be restrained and denounced activism from the bench.

The candidates also elaborated on whether they’d keep the bench “hot” or “cold.” Wagoner explained a “hot bench” as being when a judge talks often and a “cold bench” as when they don’t speak quite as much. Adkins said his approach would differ based on the case.

Gould said he’s mostly kept a cold bench during his short tenure as Superior Court judge because he believes it’s the most professional way to dispatch justice. He did say, however, that there are certain circumstances that require additional words to be said. He referenced a time when he was working as a prosecutor where he called an admitted sex offender “disgusting.”

In response to a question asking what qualities would make them a good Superior Court judge, Gould singled out “dedication.”

“If you’re dedicated to justice, everything else falls into place,” Gould said.

Adkins, meanwhile, leaned into his more than three decades of experience.