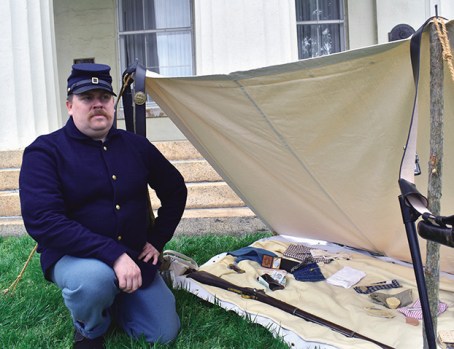 Dressed in Union soldier garb, living history reenactor Sean Dunham camped outside of the Rowan Museum on Tuesday in hopes of educating people about the Battle of Salisbury, fought between the Confederacy and Union in Rowan County's seat on April 12, 1865. Dunham dressed as a Union soldier to represent their occupancy of the city for several days after seizing the city. Ben Stansell/Salisbury Post 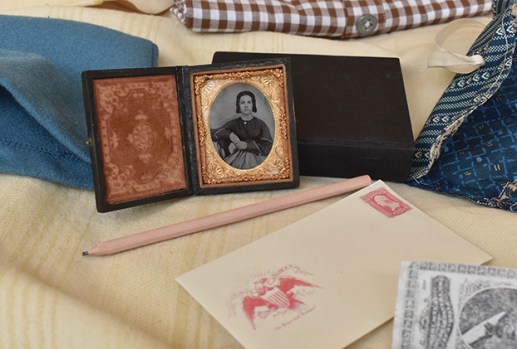 Sean Dunham didn't overlook the details in his tent display. He even had a picture of a woman taken in the mid-1850s to represent the photos of loved ones carried by most soldiers during the war. Ben Stansell/Salisbury Post 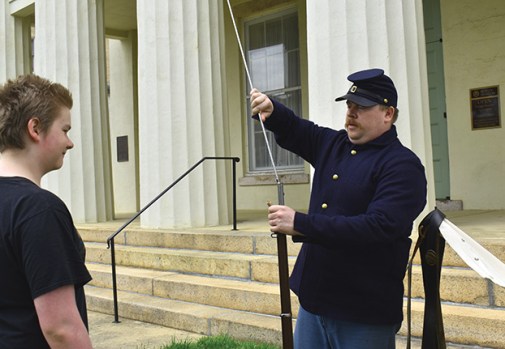 SALISBURY — Wearing the blue uniform once donned by Union soldiers while sitting next to an old fashioned tent pitched on the Rowan Museum lawn, Sean Dunham looked like an out of place time traveler who’d been dropped in downtown Salisbury on Tuesday morning.

People walking by couldn’t help but crane their necks for a better look. That was exactly what he was hoping for.

To mark the 157th anniversary of the “Battle of Salisbury” — which also happens to be on the anniversary of Rowan County’s founding — Dunham re-created a typical Union soldier’s camp with the goal of drawing in people who he could educate about the often overlooked fight. He’s determined to make sure history doesn’t forget the clash that sent Confederate defenders and Salisburians scattering as Gen. George Stoneman seized the Rowan County seat.

“People walk around all day long and don’t realize what happened where they’re walking,” Dunham said.

Dunham, who lives in Granite Quarry, has been participating in living history reenactments for two decades. He traces his fascination with history back to third grade when his father gave him a thick copy of “Campfires and Battlefields: the Pictorial History of the Civil War.”

Over the past 20 years, Dunham has participated in re-created battles in North Carolina and Virginia. In that time, He has amassed a collection of reproduction items that soldiers in the Civil War carried with them. Those items, including shaving tools, money, a rifle and even some hard tack, were on display in his tent. Dunham said they’re all objects Union soldiers may have had with them when they occupied the city for several days after the battle.

On the morning of April 12, 1865, people in Salisbury awoke to the sounds of gunfire and artillery as soldiers in Stoneman’s cavalry force met Confederate defenders near Grants Creek. Weeks earlier, Stoneman had led his cavalry of several thousand men from eastern Tennessee into western North Carolina intending to cut off Gen. Robert E. Lee’s escape routes in the event of his expected defeat in Virginia.

There are many reasons why Stoneman targeted Salisbury. At the time, the city was said to be the fifth biggest in the state.

“Salisbury was almost bigger than Charlotte during the war,” Dunham said. “It was a hub. It was a good size.”

Salisbury had also become a major collection point for Confederate supplies and armaments. Stoneman’s troops rounded up those supplies and set them afire in the streets of Salisbury after taking the city.

“There are stories that citizens in Statesville could see the fire,” Dunham said.

Soldiers fighting under Stoneman tore up the railroad tracks near Salisbury in an attempt to disrupt supply chains that served Confederate troops elsewhere, Dunham said.

Salisbury was the site of a Confederate prison that housed captured Union soldiers. Dunham said the squalid, overcrowded conditions at the prison were likely similar to the infamous Andersonville prison in Georgia, but the Salisbury jail was smaller. What Stoneman didn’t know when he advanced on Salisbury, Dunham said, was that the prisoners had already been moved. There would be no liberation.

Stoneman was also likely unaware that Lee had surrendered three days earlier in Appomattox County, Virginia, following one of the last major battles of the war. Lee was the leader of just a faction of the Confederate force, but his surrender is regarded by some as the moment the war ended.

“Obviously, they didn’t have Facebook back then,” Dunham said.

The Confederate soldiers left in Salisbury, described by Dunham as “home guards,” fought off Stoneman’s advance near where Catawba College and the VA Hospital are now located. Kesley Scott Park was a major battle point.

The fighting continued down Innes Street until Stoneman’s forces pushed the Confederate defenders out of town. After Salisbury was seized, Dunham said Stoneman considered burning the Rowan County Courthouse (now the Rowan Museum) but decided against it at the behest of a prominent Salisbury citizen who appealed to their shared status as Masons.

“Me being a (Masonic) brother makes that even cooler,” Dunham said.

Stoneman’s calvary occupied Salisbury for a short time before moving on.

While many walked by Dunham’s exhibit with little more than a curious glance, several stopped by to learn why he was there. If just one person had paused to hear more about the Battle of Salisbury, that would’ve been enough for Dunham to consider the day a success.

“You can be out here for three hours and get one person that’s interested,” Dunham said. “Everybody else is like, ‘Oh, that’s cool.’ Then they’ll keep on going. But that one person, you get to teach them. And that one person tells somebody else and it goes from there.”

Dunham plans on making the exhibition an annual event. Next year he hopes to add more living history reenactors and draw in more people to tell them about Salisbury’s Civil War battle.