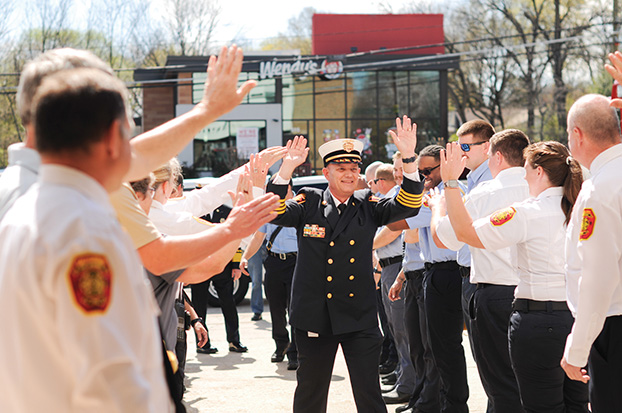 Jay Baker wades through lines of coworkers who gathered to bid him farewell during his retirement reception. Photo by Madison McCorkle.

SALISBURY — Anytime they saw smoke or heard sirens, young Jay Baker and his neighborhood friends would stop whatever sport they were playing, hop on their bikes and pedal fast through the streets of Spencer.

They had one goal: find the fire.

Standing back from the flames, they’d watch from the sidelines as the Spencer Fire Department worked to tame the blaze.

“It’s like watching a football offense come out of a huddle,” Baker said. “They come out with a play and they split up and go and execute that play. That’s pretty much what firefighters do when they arrive at the scene of a fire. They’re executing a play call by the incident commander, or coach.”

Baker’s attention was usually trained on one firefighter in particular: his father.

“You were ready to jump in there with him,” Baker said.

Baker went from chasing fires as a kid to fighting them as a young man. As soon as he turned 21 — the minimum age to join in 1987 —Baker followed his dad’s footsteps and became a second generation firefighter working at the Spencer department. He joined the Salisbury Department in 1993 and served nearly 30 years, rising the ranks and becoming a division chief.

After fighting countless fires and helping the department evolve and improve over time, Baker retired on March 31.

“You know when it’s time,” Baker said. “We have so many future leaders, sometimes you want to get out of the way and let them take over. I could’ve gone on forever probably, but I didn’t want to be that one hanging on.”

Over his three-decade long career, Baker experienced three “career fires,” which are blazes so severe a firefighter usually only sees one or two of them in a career. Baker was incident commander for two of the fires.

The first was in February 2001, a day seared into his memory partly because of the fire and partly because it was the day after racing legend Dale Earnhardt died in a last-lap crash. The fire was on the second floor of Stoudemire Furniture store in Baker’s hometown of Spencer.

“It was a large fire and it was upstairs, above right there on Main Street,” Baker said. “Crews were able to get in there and stop it from consuming the whole store. Tom and Peg Gemayel, who ran Stoudemire’s, rebuilt and were back in within 14 months or so. That was really neat.”

Another career fire happened in April of 2012, also easy for Baker to remember because it was on Friday the 13th. That’s the day a four-alarm, natural gas fed fire destroyed Lyerly Funeral Home on South Main Street. Baker said the firefighters were playing defense that day. He remembers having to call in support from Charlotte to try to salvage deceased individuals in caskets awaiting burial.

The career fire that has stuck with Baker more than any other was the March 7, 2008, blaze at Salisbury Millworks that claimed the lives of firefighters Justin Monroe and Victor Isler.

“All of us would like to have a do-over that day,” Baker said.

Baker thinks of Justin and Victor often, especially during the annual Carolina Brotherhood bike ride — a 600-mile, cross-state bicycle trek he and others make every year to honor fallen first responders and raise money for their family members.

Baker is still responsible for adding names of lost firefighters and police officers on the trailer that accompanies the bicycle caravan on its trip.

Cycling became a way for Baker to unwind from the stresses of being a firefighter, of which there are many. Despite those challenges, Baker loved the often-dangerous, mentally-taxing profession. More than anything, he said he’ll miss the relationships he’s formed with coworkers.

“The guys and gals around the firehouse are a special group,” Baker said. “Those are bonds you’ll have forever.” 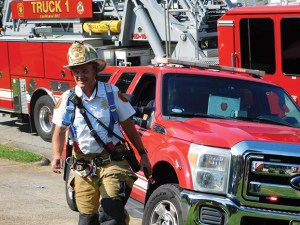 Jay Baker in action. The longtime firefighter battled plenty of blazes during his career with both the Salisbury Fire Department and Spencer Fire Department. Photo by Paul Lof.

On his last day, Baker’s colleagues made sure to make him feel appreciated. Waiting for him at the back door of the firehouse with doughnuts in hand were friends he’s made through Carolina Brotherhood. The department held a reception for him later that day. After his ceremonious final inspection, Salisbury Fire Department Chief Bob Parnell dropped him at Fire Station No. 1. There, his colleagues formed two lines and he walked between them, slapping hands along the way.

“It was a big day of up and downs, with emotions all over the place,” Baker said.

Baker retired as a division chief — a position that carried plenty of responsibility. In addition to managing the fire department’s budget, Baker helped make personnel decisions and order equipment. He gave the department a social media presence to keep local media and members of the public up-to-date with fires in the area and other department happenings.

“That was a real easy change to make to bring the department into the new age of social media,” Baker said.

Baker has operated the Salisbury Fire Department’s Twitter account, posting updates even when he’s been off the clock and out of town.

Social media isn’t the only change Baker has been a part of since he started with the Salisbury Fire Department. The department has two more stations now and the call volume has increased from about 1,400 a year to over 7,000. More and more firefighters have started responding to medical emergencies and they’ve broadened their skillsets accordingly, Baker said. Salisbury had an ISO 2 rating when Baker joined, but that’s improved to an ISO 1, which is the highest possible.

Baker feels like he’s leaving the department in good hands.

“The department has come a long way with equipment and personnel and even the scope of work we perform,” Baker said.

Baker’s retirement from the Salisbury Fire Department comes several years after he retired as chief of the Spencer department. For years, Baker led the department he grew up following. He even fought fires with his father before his dad retired.

Only 56 years old, Baker has many plans for his post-firefighting career. He’d like to travel more, expects to put his Catawba business degree to good use and wants to stay involved in the community and his church. Both his father, Bill, and mother, Pat, instilled in him how important it is to help others. He’ll also keep logging miles on his bike. For now, he feels blessed to have made it through a career as a firefighter — something he doesn’t take for granted.

“So many people don’t make it and we ride for people who don’t,” Baker said. “My shining moment is just making it to the end of my career and still being here for my family.”

Baker is especially thankful for the support he’s had from his family, including wife, Kelly, sons Thomas and Ben, and step-daughter Meridith, throughout his career.