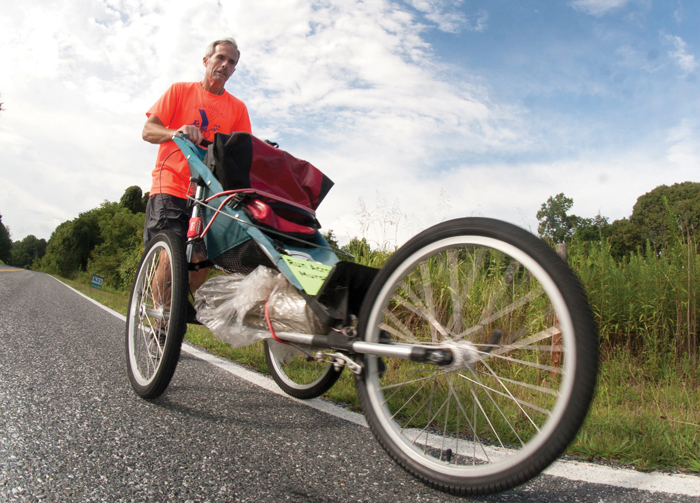 In 2018, David Freeze ran across the state from Murphy to Manteo while pushing a baby jogger, a total of more than 600 miles. Photo by Andy Mooney, Salisbury Post.

Last week’s column addressed some help from Jeter Chiropractic for a nerve issue in my right leg and some discomfort in my lower back. I wrote that column on Thursday and one week later, I’m doing the next one after what seems like much more than just seven days have passed. My intent for this column is to share information garnered from a very challenging week.

Last Thursday afternoon, I noticed some blood in my urine. That isn’t always a bad thing for runners because it does happen once in a blue moon, usually tied to dehydration or hard training. I put the issue on the shelf and finished the day, the last time for over a week that I have attempted to exercise. The beginning of a continuing saga was the blood and lower back discomfort, both now tied to a kidney stone that reared its ugly head late Friday. As a long-time stone sufferer, five years had passed without a severe one. Severe usually means big, so large that it can’t get out of the body on its own. Since this story is not about kidney stones, I mention it briefly as the setting for a much more serious issue.

The stone hit hard on Thursday night with severe nausea that emptied my stomach and caused extreme chills while limiting my ability to urinate. Often, a stone stops moving and the pain subsides for hours before returning, but his one hit hard for 12 consecutive hours. My daughter Amber took me to the Novant ER and with arrival just after 5 a.m. Over the next day and half, I had surgery to place a stent that restricted the stone to the edge of my right kidney. I left the hospital on Saturday afternoon with further surgery to remove the stone and stent planned in a few days. Here is where this week’s story really begins.

I was home, not especially uncomfortable except when I had to urinate. Bladder spasms, caused by the stent, were terrible but usually went away within minutes. I got the first call late on Saturday to return to the hospital immediately due to a possible blood infection. Drop everything and get here!

It was serious enough that the doctor called my daughter twice when she couldn’t reach me. I talked to Dr. Spencer about 8 p.m., just about six hours after I had been released. She told me that I needed to immediately start treatment for a blood infection, promising to call back within 20 minutes and give me the plan for re-entry into the hospital.

Dr. Spencer called back and shared the good news that they wanted to run the blood cultures again to confirm the issue. I heard nothing more until Monday afternoon when Dr. Rickard called with the same issue. The cultures had confirmed the blood infection, now making every hour important.

I drove back to the ER, prepared to stay for as long as 12 days, which Dr. Rickard suggested as a possibility. New blood draws and vital sign checks continued as I was put in an ER roomette for constant monitoring. At that point, I felt great and had no fever, apparently a key sign if the infection had begun its work. Most important was an initial treatment with a specific IV antibiotic based on best knowledge of my situation. I was told that there are many types of blood infections and the right antibiotic had to be found to stop it and that some antibiotics used are hard on the kidneys. This work, chasing the right antibiotic, was done with ongoing cultures.

Sent thankfully to a regular room in the hospital at 4 a.m. on Tuesday morning, I settled in for seemingly constant blood draws and vital sign checks, while wearing a full-time heart monitor. I began to gather information on what the infection could do if left unchecked. Heart issues seemed to be the most pressing concern, but damage to other organs could be tremendous. Treatment was based on the right choice of antibiotic and use of the quicker IV as opposed to pill form intake.

Over two days, I followed Novant MyChart postings and realized that several departments were working together to beat the infection quickly, with urologist Dr. Lee Johnson very much aware of the activities. I spent the time trying to keep up some of my writing and other laptop work. More importantly, I began building a true realization of all the good things happening around me. The nurses and CNAs from third floor west became friends and sources of knowledge and comfort during the situation. More and more, doctors stopped by as good results kept showing up. Then on Tuesday afternoon, infectious disease nurse practitioner Caroline Waller visited for an unhurried discussion about my situation. She informed me that should those results continue, I would be able to leave for treatment from home on Wednesday afternoon. I was shocked that things were moving so quickly.

So, from home, and with the urology surgery now set for Monday, I feel very blessed and thankful for all the work done already at Novant Health and the fact they are still monitoring me. I’ll continue to update things next week.

The Dolphin Dash 5K is set for Saturday, April 9, at Sacred Heart. Look for it and more events at www.salisburyrowanrunners.org.