Telling the truth about life on the road: Musician returns to church after giving up alcohol and drugs 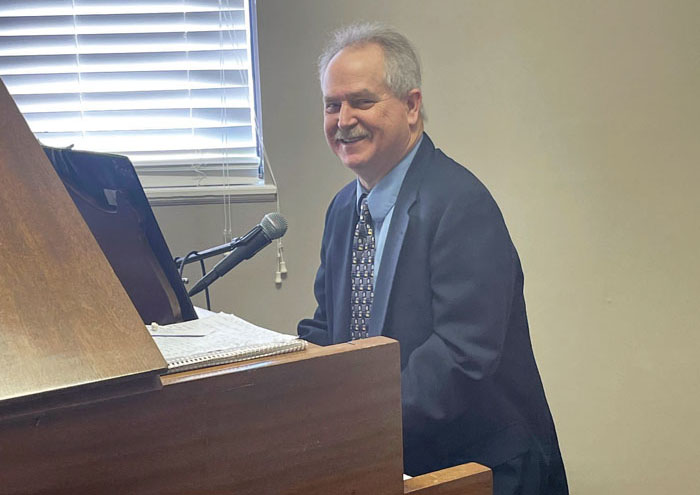 John Gillespie at the piano at Shepherd Baptist where he sings, plays and continues to write music. Photos by Shelia Gillespie.

John Gillespie has nearly always been talented musically. It was expected, with a dad good enough to play with Loretta Lynn, Sonny James, Red Sovine, Johnny Horton and more of the early country music stars, just before forming his own gospel band. James Gillespie taught his whole family to play and sing. John might have been the best of them all.

John’s brothers, Wayne and Mike, played the guitar and drums, James and sister Brenda also played guitar and mom Edna sang. John mastered the piano and keyboards, eventually the bass and could eventually play about 15 other instruments.

At age 12, John’s family signed him up for piano lessons. He took home three music books and was told to keep playing the same three songs until he could play them well. After just a few weeks, John was able to play all the songs in the books, every bit of it by ear. John said, “I would pick out the notes of the first couple lines and then I would have it. I could read enough to get each one going. Then it just flowed out of me. The music teacher told my parents that I was good to go, that there was nothing else he could teach me.”

By age 14, John was playing as often as possible with his dad’s gospel group, the Laymen. John said, “When I heard the singers sing, I could play the song. But since I was still in school, I couldn’t travel all the time with them.”

Just after high school, John heard a band called “High Country” play in Charlotte, his hometown. They didn’t have a piano or keyboards set up and John told the band leader that he could bring a keyboard for them to use. John said, “It went so well that the band asked me to come up on stage with them and asked what I wanted to play. I suggested Ronnie Milsap’s ‘Stranger in my House.’ It couldn’t have sounded better and immediately they offered me a job to travel with them on the road. All I could say was, ‘when do we leave?’ ”

Two days later and at age 18. John began traveling full-time with High Country, an offshoot of the Swinging Medallions who were famous for three No. 1 songs, most notably “Double Shot of My Baby’s Love.”.

John was living his dream as High Country opened for George Jones’ band and he was often invited to stay on stage and play with Jones. John said, “George was a great guy, especially humble after missing so many engagements and gaining the title of ‘No Show Jones.’ ” Jones had issues with alcohol abuse prior to this time and John was heading in that same direction.

John eventually played with Gene Watson and Jim Glaser, both big stars in their own right. In 1991, he performed “Loneliness Fills the Heart” on the Nashville Revue. When the song was recorded and mixed in the studio, John played piano, drums and the bass. It got some radio play in other areas, but not here.

Playing at the Yellow Rose in Mooresville in 1997, John hit rock bottom. He was found passed out on the hood of a vehicle after a show, completely overcome by the mixture of alcohol and drugs he was using. John said, “I started doing the adult thing, drugs and alcohol, common for the entertainment culture. I would find myself at home in bed after a long drive and not know how I got there. I drove while using cocaine for 12-24 hours at a time. I knew I couldn’t go on like this. I was raised in church, and I wanted to get back there.” Bartending that night at the Yellow Rose was John’s future wife, Shelia. It was the first time they had met.

Assessing where he was and where he wanted to go, John looked at his life. He said, “I had become a follower instead of a leader. I had messed up relationships and friendships and knew that I was going to end up dead if I didn’t stop. My parents had raised me right and I knew better. I wanted the road life until I didn’t. I asked the good Lord to take away my desire for it.”

After those fast times on the road, John cut back to playing with lesser bands, one of them headed by an Elvis impersonator called JJ and Company. John became an Elton John impersonator, crediting him, Milsap, Barry Manilow and his family as his musical influencers.

John was solidly back in church and working at a plywood supplier, but eventually serious health issues hit him hard, possibly some of it as leftovers from life on the road. A bout with extreme blood sugar issues, congestive heart failure and pancreatitis eventually led doctors to tell the family that he wouldn’t make it. But he did and he also survived a recent and very serious battle with COVID. John has had to take a break from music recently due to arthritis in his hands.

As a child, John would often visit his grandparents in Mooresville and walked to Shepherd Baptist with his family members. These days, he’s been back long term and raves about the church and how close the members are. Often reminded of how the life of glitz and glamour became more about drugs, drinking, heartache and pain, he’s happy with things just like they are. Music ahead will be at his church or a jam session at the Patterson Grange meeting.