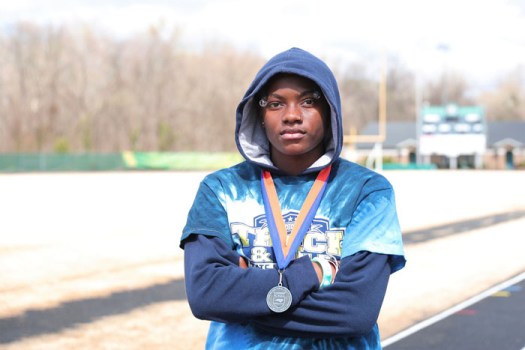 WINSTON-SALEM — Rowan County didn’t have quantity at the indoor track state championship meets in February, but the quality was certainly there.

Some stellar performances and one state champion.

Salisbury senior Marcus Cook, who broke school records as a football receiver, won gold in the triple jump in the 1A/2A State Championships.

“Marcus is one of the most talented, gifted kids you’re ever going to find,” Salisbury coach Todd Parker said. “And on top of that, he’s coachable.”

Because of weather issues, Salisbury had participated in only two meets during the entire “indoor track season” — with both of those meets contested outdoors.

“Rain, sleet, snow, you name it and we had to deal with it,” Parker said. “One of the two meets we did get in was at East Rowan, with piles of snow off the track.”

Getting a chance to compete indoors on the climate-controlled JDL Fast Track in Winston-Salem brought out the best in the qualifying athletes.

“It was a totally different experience,” Cook said. “I had the chance to compete in a lot better conditions indoors. No wind and nice temperatures. You feel like you can go higher.”

Cook’s first triple jump was solid, better than 42 feet, and placed him in the early lead.

He stood second when his final jump came around. He nailed it — 44 feet, 11 inches — to win by more than a foot.

“That was just Marcus’ way of saying he was not going to lose,” Parker said. “He was focused and he hit his steps right and he made the perfect jump. You had to be happy for him. He’s got a great attitude, always smiling, always upbeat, and now he’s a state champion.”

“The goal now is to win one outdoors,” Cook said.

Parker said Cook also can be a factor in the long jump at the state level.

South Rowan sophomore Eli Julian placed fourth in the 1600 in the 3A State Championships, but it was a mighty impressive fourth.

Julian moved to the top of the leaderboard for the 1600 all-time in Rowan County, topping times posted by such standouts as Carson’s Zach Marchinko (4:29 in 2016), Salisbury’s Nick Summers, South’s Michael York, North Rowan’s Neegbeah Reeves and East Rowan’s Conor Honeycutt.

North Rowan has a sophomore class that should return the Cavaliers to being a force in 1A track and field.

Tai’lah Ward had a second and a fifth in the 1A/2A State Championships in Winston-Salem and was the highest scorer for Rowan County girls.

“She’s super-talented and always comes to practice ready to work,” said North coach Aaron Young. “She’s got that fire that the great ones have. In competition, she’s got another gear. She’s got a lot of great things ahead of her.”

Another sophomore, Aniya Brown, also shined for the Cavaliers, placing third in the triple jump (35 feet, 5 inches) and fifth in the 55-meter hurdles (9.33).

Together, Ward and Brown accumulated 22 points, good for 11th place.

Young pointed out that sophomore shot putter Brittany Ellis also was a state qualifier, but she was playing basketball for North on the day of the indoor track state championships.

Salisbury senior Sutton Webb also was a standout in the 1A/2A State Championships.

Webb has the speed and endurance to compete at just about any distance, indoors or outdoors, and placed second in the 1000 meters in 3:13.75.

“Sutton ran the race of her life, and she really dug down deep for a great last 100 meters,” Parker said. “But the girl who won it (Highland Tech’s Lauren Tolbert) was super-human that day and broke the meet record.”

Webb was eighth in the 800 outdoors in the 2A State Championships last June.

The 800 probably is her best event.

Webb’s primary sport is soccer, where she’s the school record-holder for goals scored, but the Georgia recruit still plans to compete in the big track meets this spring.

Parker was hoping to have her for a practice soon to work on relay handoffs with her teammates.