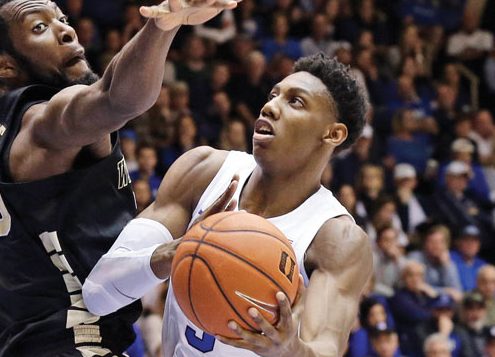 RJ Barrett led the way for the Knicks in the victory over the Hornets on Wednesday night. (AP File Photo/Gerry Broome)

Obi Toppin had 18 points and 11 rebounds, and Alec Bunks chipped in with 17 points for the Knicks, who have won three of five.

Playing without Julius Randle, who sat out with right quadriceps tendon soreness, the Knicks shot 20 of 45 from beyond the arc against a Hornets team that was slow on closeouts.

LaMelo Ball had 32 points and nine rebounds and Terry Rozier scored 18 points for the Hornets.

Charlotte entered the night one game behind the Brooklyn Nets for the eighth spot in the Eastern Conference but never led against the Knicks, who are 11th in the East. New York opened a 40-24 lead in the first quarter, shooting 68.2% from the field while making eight 3-pointers.

New York entered the fourth quarter up 12 before Isaiah Thomas’ 3-pointer cut the lead to eight with 7:07 left, giving Charlotte some momentum. But the Knicks kept their composure and Toppin provided back-to-back dunks in the final two minutes — one off a lob from Taj Gibson — to seal the victory.

Hornets: Their streak of consecutive games with at least 30 assists was snapped at five. … Charlotte finished with 26 assists and was 9 of 17 from the foul line.

Knicks: At Miami on Friday night.