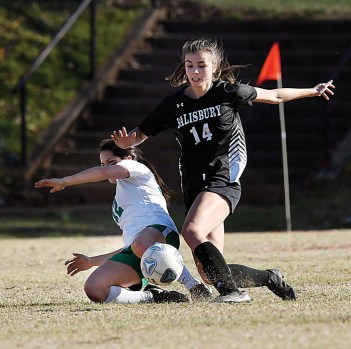 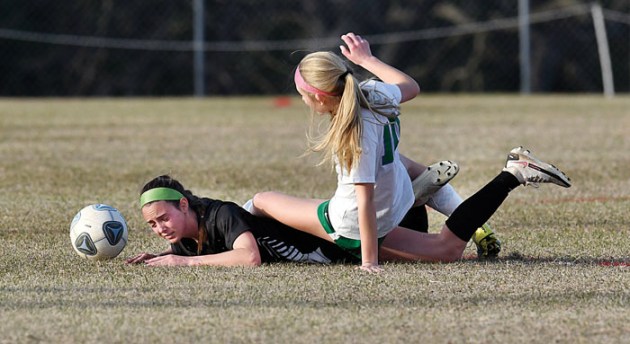 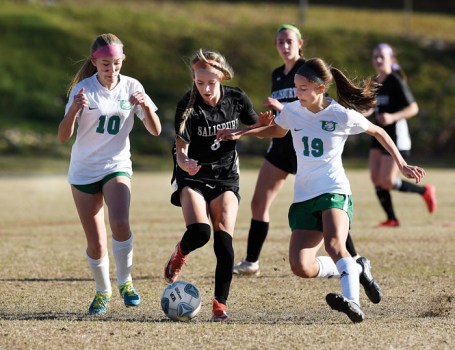 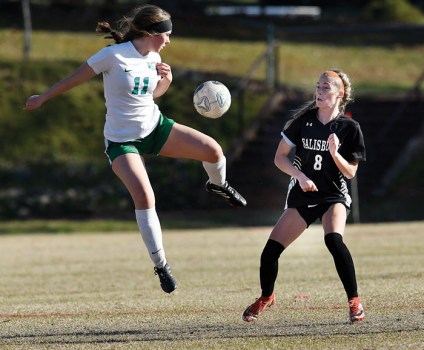 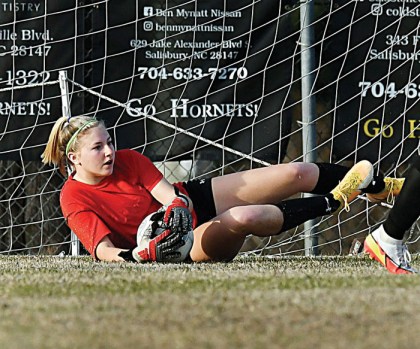 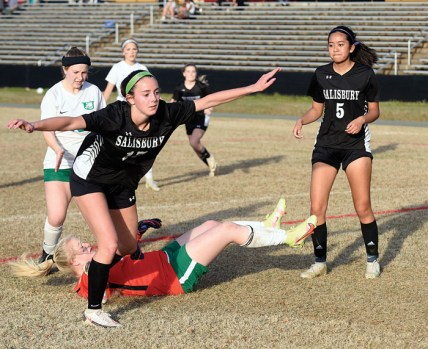 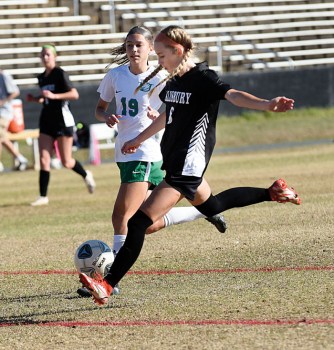 Salisbury’s Sutton Webb 8 scoring the first goal of the game. photo by Wayne Hinshaw, for the Salisbury Post

SALISBURY — Salisbury’s Sutton Webb scored the 99th and 100th goals of what has been an illustrious soccer career, but that marvelous milestone may have come in a loss if not for teammate Sydney Hlavacek.

The Hornets were reeling from three straight Uwharrie Charter goals with 9:25 left on the scoreboard at Ludwig Stadium when Hlavacek finished off Webb’s free kick into the box from 30 yards out. That timely goal stifled the visitors’ momentum and sealed a wild 5-3 victory.

“That goal came on exactly the kind of play Coach (Matt) Parrish talked about with us at halftime,” Webb said. “Their keeper had a tendency to drop some balls, and we needed to keep crashing. Sydney crashed. Her goal secured the win for us.”

Parrish has an amazing record in his 17 seasons with the Salisbury girls (267-63-18), but he wore a dazed expression and had an extra-long postgame chat with the team after the Hornets almost squandered a 4-0 lead.

“Uwharrie Charter is the best team we’ve played, and it was poor scheduling by me to play them on the Monday after we came back from spring break,” Parrish said. “This was only Uwharrie’s second game. After they’ve gotten a few under their belts, they’re going to be handful for everyone. If Sydney doesn’t get that goal, we probably lose. If the game had lasted another seven or 10 minutes, I’m sure we lose.”

Webb, a speeding bullet in tennis shoes who is headed to the University of Georgia, was involved in all five Salisbury scores. Besides the two goals she scored herself, the Hornets scored on a rebound off Webb’s deflected shot, scored off Webb’s corner kick, and finally off of Webb’s free kick.

The non-conference matchup with the 1A school from Asheboro was nothing but lollipops and rainbows for quite a while for the Hornets (5-0).

Webb got her first goal in routine fashion a little over eight minutes into the action.

“Just a basic give-and-go with Izzy Banish,” Webb said. “I was able to take my time and kept it on the ground.”

Rebound goals by Hlavacek and Banish were triggered by Webb and pushed the lead to 3-0.

Uwharrie Charter didn’t look overmatched, however. The Eagles (1-1) have serious speed at the top.

The visitors had several scoring chances in the first half, but Hornet defenders and goalkeeper Hannah Schmeltzer turned them away.

When the Hornets made it 4-0 in the early stages of the second half, it appeared to be a done deal. Banish made a perfect cross from the left side, and Webb cleanly hammered home her 100th goal.

That’s a remarkable scoring total as this was only Webb’s 45th match. The only full season the senior has played was her freshman year. COVID stopped her sophomore season after just three matches and limited the Hornets to 14 outings her junior year.

South Rowan’s Madison Henry set the county scoring record for girls with 128 goals from 2017-20, despite losing most of her senior year to COVID. West Rowan’s Toni Lucente scored 103 goals. Emma Miller set the Salisbury program record with 101, so Webb is on the doorstep of topping that mark.

“I’ve been blessed with many great players over the years, and Emma Miller was such an amazing player,” Parrish said. “For Sutton to be one goal behind her, considering the seasons and the circumstances that she’s played in, that’s a testament to how incredible a player Sutton has been.”

There was the still the matter of winning the match, and Uwharrie Charter wasn’t done. The Eagles countered immediately after Webb’s goal, and while the Hornets still led 4-1, momentum suddenly switched to the far sideline.

“I think we kind of got tired,” Banish said.

Added Schmeltzer, “What happened is we got comfortable and started feeling like we had it in the bag. And then they caught us off guard.”

With 13 minutes left, the Hornets were hanging on 4-3.

“They were bringing it to us over and over,” Parrish said. “Either they were scoring or Hannah was making a remarkable save to stop them. For about 15 minutes there, we faced major adversity, and we didn’t handle it very well. When it gets tough, you can’t bicker. You have to pull together.”

Hlavacek, a hard-working senior midfielder, hadn’t scored this season — not until this game. Her second crashing goal, with the clock ticking toward nine minutes, and with the Hornets hanging by a skinny thread, saved the day.

So there’s room for improvement, but the Hornets are still undefeated and still ranked second in 2A West.

Webb and Schmeltzer are special players, and Parrish always figures out how to bring it all together. The Hornets took valuable lessons away from this close call.

NOTES: Webb scored 43 goals as a freshman. She scored three her sophomore season and had 36 in 14 games as a junior. She has 18 already this season … Salisbury is scheduled to play Thomasville Wednesday, but the game may be moved up to Tuesday if officials can be secured.