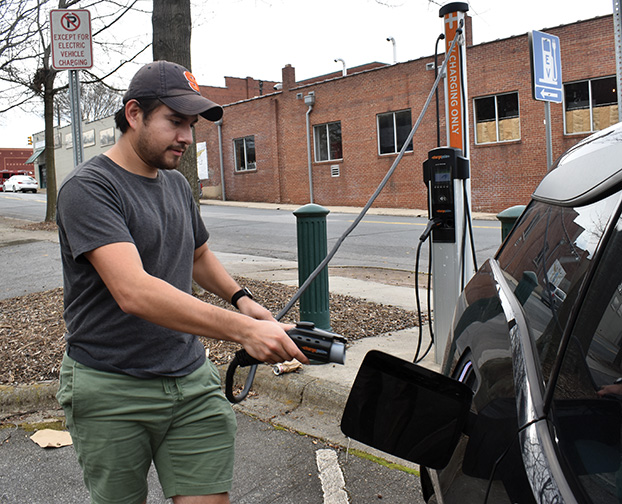 Bryan Lopez plugs a charger into his BMW i3 electric vehicle. Lopez has been utilizing the free station in downtown Salisbury to keep his car charged during his workday. Ben Stansell/Salisbury Post

SALISBURY — During Super Bowl LVI last month, Joe Burrow and Aaron Donald weren’t the only ones stealing the spotlight. In between touchdown passes and sacks, electric vehicles shined on advertising’s biggest stage.

There were six ads featuring electric vehicles and one commercial for an at-home charger, which is currently sold out on the company’s website. The marketing message was clear: car makers are preparing to go all in on electric vehicles. Many North Carolinians have already joined the movement. At the end of last year, there were 24,997 fully electric vehicles registered in the state — a small but growing number of drivers.

With electric and hybrid vehicles poised to increase in popularity in the coming years, North Carolina is jockeying to be in a good position to encourage and accommodate their proliferation. In January, Gov. Roy Cooper signed an executive order calling for an increase in registered zero-emission vehicles to at least 1.25 million by 2030 and for 50% of sales of new vehicles in North Carolina to be zero-emission by 2030.

While cities like Charlotte and Raleigh have worked to bolster their electric charging infrastructure, Rowan County has only a half dozen public charging stations — all concentrated in Salisbury. That could change in the near future as the city prepares to apply for grant funding to install two more stations in the downtown area.

The city of Salisbury partnered with Duke Energy in 2017 to open a public electric vehicle charging station at Gateway Park at 105 Depot Street. The charging station was heralded as at the time by city leaders as a step toward sustainability.

Gerry Wood Dodge is also listed as having a charging station, according to the PlugShare application.

Not far from those dealerships, the Hampton Inn at 1001 Klumac Road offers several charging stations for guests, including two Tesla-specific plugs and one general charger. The hotel’s charging stations are for customers only and come at no additional charge.

Krista Sullivan, general manager of Hampton Inn, said the charging stations are utilized noticeably more today than they were when they were installed more than a decade ago. She expects that trend to continue.

“I think they’ll be used more in the next five years than the last five years,” Sullivan said.

Guests who drive electric vehicles have even decided to stay at the hotel primarily because it has the charging stations, Sullivan said.

Rowan-Cabarrus Community College installed a two-plug level two charging station at its north campus at 1333 Jake Alexander Blvd. S. in 2019. Similar to the city of Salisbury’s downtown station, the addition was made possible by a Duke Energy grant. The station is open to the public and is administered under ChargePoint’s nationwide system, which enrolls drivers and allows them to charge their vehicles for a fee collected electronically on behalf of the station owner. The community college plans on adding more stations in the future and is in the process of submitting additional grant applications.

“The college is committed to sustainability and we see it as a way of fostering the growth of electric vehicles and a convenience to our students, faculty and staff who drive electric vehicles,” said Sarah Devlin, chief officer of governance, advancement & community relations for RCCC.

An additional charging station is located in the parking deck at Novant Health Rowan Medical Center.

Like Cooper, President Joe Biden is aiming for 50% of sales of new vehicles in the United States to be zero-emission cars by 2030. According to a project by McKinsey and Company, Biden’s goal will be met. The management and consulting firm’s module shows that electric vehicle sales would make up about 53% of all passenger-car sales by 2030.

Aside from governmental support, high gas prices could cause electric vehicle demand to grow.

“Frankly, every time gas jumps up, we get a sudden surge in interest,” Hinson said.

It helps that electric vehicles are getting better, too. Hinson said the new models can drive significantly further on a single charge than early models. Many battery-powered vehicles on the market now have a range above 200 miles.

“With range improvements, it’s taken away most of that range anxiety,” Hinson said.

With signs pointing to electric vehicles making up an increasingly larger share of the car market in North Carolina and the United States, Rep. Harry Warren said it’s “just common sense” for the state and for Rowan County to invest and support charging infrastructure.

In 2019, Warren was a primary sponsor of a bill that allows charging outlet operators to buy electricity from their local utility and resell it by the kilowatt-hour, similar to how gas stations charge at the pump. Warren also has introduced a bill in the senate that establishes fines for cars parked in electric vehicle charging stations that aren’t actively charging their cars.

Warren said having a robust network of stations throughout North Carolina will be important for the economy, especially if North Carolina wants to keep or improve its ranking as the sixth-most visited state in the country.

“If we still want to be a tourist destination, we have to acknowledge the fact that so many car manufacturers are devoting a large percentage of their output to EVs, an increasing amount every year,” Warren said.

Funding for the improvement of charging infrastructure should be plentiful in the coming years. Billions of dollars in the federal infrastructure bill passed last year has been earmarked for electric vehicle related projects. That money will likely trickle down to the local level in the form of grants and state programs.

The North Carolina Department of Environmental Quality has started distributing money from the Volkswagen Settlement to bolster electric vehicle infrastructure. Salisbury plans on applying for funding from that program to bring more charging stations to the city.

“We know there is a need for it,” said Michael Hanna, public works administrative services manager for the city of Salisbury. “With the amount of restaurants and shopping and everything else here in Salisbury, we feel like more additional EV stations will be a perfect fit.”

Mayor Karen Alexander echoed that sentiment and said she is glad to see electric infrastructure as being a priority for the city’s staff. Alexander said she would like to formulate a comprehensive plan to bring more charging stations to Salisbury, especially near I-85.

Hanna said employees with the city’s public works and engineering department have already identified two locations where charging stations might be appropriate. One is at Bell Tower Green and the other is behind City Hall. Hanna said those spots are ideal for charging stations because of their proximity to downtown restaurants and shops.

“People can hook up and charge and let their kids play, pick up and eat lunch,” Hanna said.

Hanna said the city will apply for the grant funding in May. The money would help the city install level two charging stations.

“We’re a prime location for it so I’m excited for this and I’m excited for more EV stations in the future,” Hanna said. “As EV keeps increasing, hopefully we’ll be there to meet those needs.”

Bryan Lopez is also enthused about the city’s plans to bolster charging infrastructure.

“I think it’s great that smaller cities see value in it,” Lopez said.

The Kannapolis native has been using the charging station at Gateway Park while working in Salisbury for the past four months. Lopez said the station, which offers free charging, has been convenient and reliable. He typically parks his BMW i3 there while he’s working or during his lunch breaks.