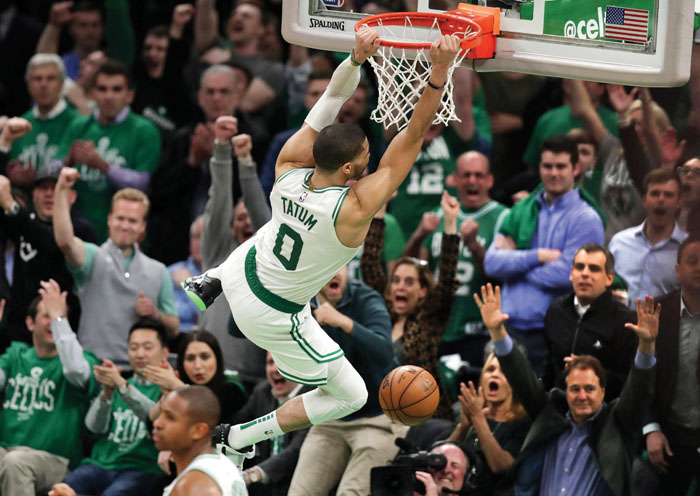 CHARLOTTE — Jayson Tatum scored 16 of his 44 points in the fourth quarter, and the Boston Celtics defeated the Charlotte Hornets 115-101 on Wednesday night for their fourth straight win.

Tatum, coming off a 54-point performance against the Brooklyn Nets on Sunday, made 16 of 24 shots from the field and 6 of 9 from beyond the 3-point arc. He also made all six free throws.

He was also effective on defense, helping limit the red hot Terry Rozier to just 14 points on 5-of-17 shooting.

The Celtics are looking like a championship contender, having won 15 of their past 17 games as they continue their rise up the Eastern Conference standings.

Jaylen Brown had 15 points, while Robert Williams chipped in with 11 points and 11 rebounds and Al Horford added 10 points and 10 rebounds for the Celtics (40-27), who were in control most of the game.

Miles Bridges and P.J. Washington each had 17 points to lead the Hornets, who fell to 1-12 on the second night of back-to-back games.

It was the second straight night the Hornets have been victimized by a star player on their home court. They allowed Brooklyn’s Kyrie Irving to score 50 points in a 132-121 loss on Tuesday night.
“He made six highly contested 3s,” Hornets coach James Borrego said of Tatum. “We double-teamed him, we trapped him. He is a hell of a player and is playing as well as anyone right now.”

Tatum began to got hot at the end of the third quarter, helping Boston build an 87-78 lead.

Tatum opened the fourth quarter with a fall-away 3 from the right corner and a long 3 from right wing as the lead increased to 18 points. A few minutes later he canned another 3 from the other wing, even as his body was shifting to the left.

The Hornets mostly played zone against the Celtics in an effort to contain Tatum, but it didn’t work.

“Not be stagnant and shoot a lot of threes, because that’s kind of what they want you to do,” Tatum said of the key to beating the zone. “You have to move the ball and get to the middle.”

Charlotte has not participated in a playoff series since the 2015-16 season and this year’s hopes are beginning to look bleak as they’re ninth in the Eastern Conference standings, a half-game ahead of the Atlanta Hawks and one game up on the Washington Wizards.

There is the possibility that Gordon Hayward could return in the next few weeks, which would certainly help take the scoring load off of Rozier, Ball and Bridges.

The Celtics finished with 30 assists, with Marcus Smart and Derrick White combining for 17 assists and only one turnover.

“They are doing a great job of finding guys and passing up good shots to get great ones for others,” Celtics coach Ime Udoka said. “That is what it is going to take moving forward. You can’t rely on one guy or two guys to score all of the points. We want to have an unselfish team that plays a good appealing brand of basketball, and I think we’re doing that.”

White, who was acquired in a trade from the San Antonio Spurs on Feb. 10, said his goal has been just to fit in with his new Boston teammates and “try not to mess it up.”

Hornets All-Star point guard LaMelo Ball struggled with his father LaVar Ball looking on from courtside seats, committing six turnovers in the game’s first 14 minutes before being benched for the remainder of the second quarter for Isaiah Thomas.

Ball later returned and finished with 15 points and eight rebounds.

Tatum received a hug from LaVar Ball as he left the floor.