Raises, additional election workers among changes in Rowan Board of Elections budget proposal 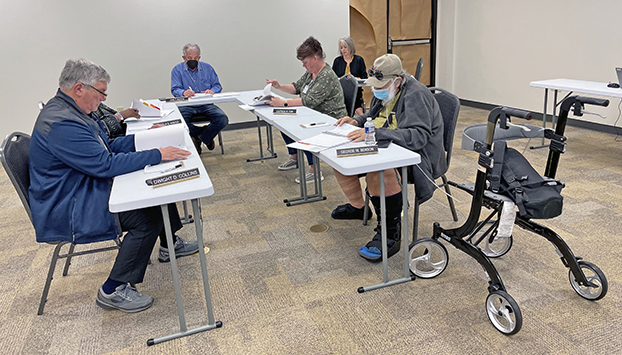 Natalie Anderson/Salisbury Post — Board of Elections workers met Tuesday to sign off on a 2022-23 budget proposal that will include pay raises for workers, additional staff and increased printing costs.

SALISBURY — The Rowan County Board of Elections on Tuesday signed off on a 2022-23 budget proposal that will include pay raises for workers, additional staff and increased printing costs.

The board met Tuesday during its regular monthly meeting to approve the list of candidates seeking office in the 2022 primary election and discuss updated chief judge and judge appointments, an official list of possible election workers for the one-stop voting period and a proposed 2022-23 budget.

Executive Director Brenda McCubbins said during the meeting the proposed budget, which she will submit to county administration this week, won’t have a hefty boost from supplemental COVID-19 funding this time. Rowan County’s 2020-21 fiscal year budget allocated $722,410 to the Board of Elections, which was $21,784 more than the 2019-20 fiscal year. For 2021-22 budget, county commissioners approved $680,755 for the Board of Elections.

The board received a $244,691 grant in 2021 from the federal HAVA Election Security Fund to offset some costs in the 2020 general election, which included two voting machine rentals and a tabulator used during the recount. The remainder of the grant was used to purchase 48 ExpressVote machines from ES&S.

One-stop supervisors will earn $13.18 per hour, while other one-stop workers will earn $10.98 per hour. The board also authorized additional pay for McCubbins if she exceeds 40 hours any week beginning from the first day of one-stop voting until the countywide canvass after the election. That additional compensation will amount to $30 an hour.

Early voting supervisors and workers automatically receive an annual cost-of-living adjustment each year when it’s given.

Additionally, McCubbins noted the current 2021-22 budget covered municipal elections in 2021 and will also cover the upcoming primary election on May 17, while the 2022-23 budget will only cover the general election.

McCubbins said the staffing numbers will change slightly because two workers will be dedicated to curbside voting service and an additional worker will be needed to operate the DS200 voting machine during shifts. There is an average of six workers per precinct.

Printing costs will also increase because the board will be required to discard absentee by mail ballot envelopes due to wording changes, McCubbins said. So, rather than keeping a stockpile, the board will have to reorder such materials ahead of each election.

McCubbins also said the board is working to allow more split shifts to cut down on overtime hours for election workers. Board member Catrelia Hunter asked if any elections workers are authorized to work split shifts. McCubbins said judges cannot split shifts on Election Day, but other election assistants can.

Those interested in assisting the board in carrying out the 2022 elections or for more information, visit rowancountync.gov/Elections.

The board also approved moving its regularly scheduled meeting in April from April 5 to April 12, beginning at 12:30 p.m. at the elections office located at 1935 Jake Alexander Boulevard West.