Salisbury's Rachel McCullough 3 shooting foul shot with 1:11 left on the clock and down by one point. . photo by Wayne Hinshaw, for the Salisbury Post 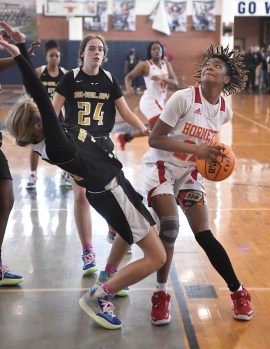 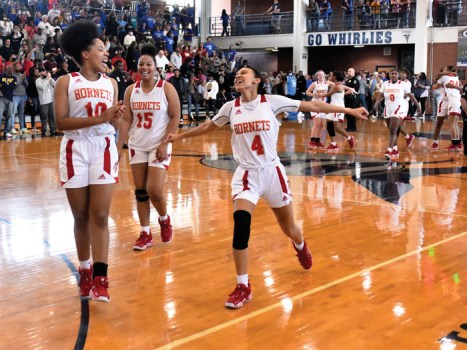 Happiness all around for Icesis Nwafor 10, Mary Morgan 15, and Kiki Walker 4., photo by Wayne Hinshaw for the Salisbury Post 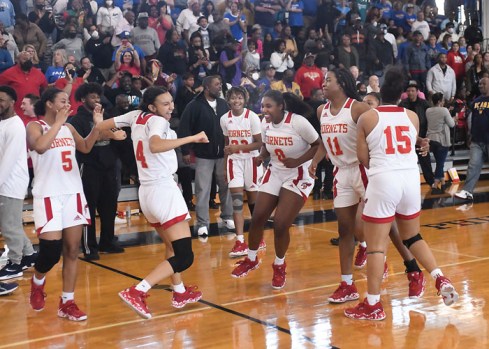 SALISBURY — Salisbury’s 45-44 double-overtime win against Shelby on Saturday in the West Regional final was decided by a Jamecia Huntley layup and a Kyla Bryant assist.

“The most important shot I’ve ever made,” Huntley said. “This game meant so much to all of us.”

Bryant had missed on that final Salisbury possession, but Mary Morgan had rebounded the ball and had fired it back out to Bryant. Then Bryant spotted Huntley on the left block.

“Surprised by how open Jamecia was,” Bryant said. “As soon as I made the pass, I knew we had the lead.”

That sequence by three Salisbury juniors will be remembered. They’ve had a connection for a long time. The Hornets (27-1) have won 26 in a row, and they will play Farmville Central (27-4) next week for the state championship.

To get to that fateful layup with 8.5 seconds left in the second OT, in Grimsley’s long and loud Bob Sawyer Gym, it took Salisbury’s full roster and it took all three coaches.

“We’re a team, and that’s what a team is,” Salisbury head coach Lakai Brice said.

It took Morgan, who averages about 3 points per game, standing her ground game in the lane, not once but twice, to get offensive fouls on one of the state’s best guards.

It took an awful lot.

“We didn’t click much on offense, but our defense was a different story,” Brice said. “We won it with defense. We won it by getting stop after stop. We didn’t play good defense today, we played great defense. We just had to keep playing defense until we could make a few shots.”

It was a gritty, grinding, grueling, grimy game right from the tip. Ugly, yet beautiful. Never to be forgotten by anyone who played in it.

It was a classic for 2A girls basketball. Shelby led 14-7 early, but neither team really had control the entire afternoon. Every possession counted.

“This was the game we wanted to play against the team we wanted to play,” summed up Salisbury senior forward Jaleiah Gibson, who grabbed some ferocious rebounds. “Both teams played great defense, so neither team could hit much. But there was no way we were going to lose it. This was revenge. This is what we’ve worked for since last year.”

Shelby had lived rent-free in the heads of the Hornets for a solid year. Salisbury’s 48-46 second-round loss to eventual state champ Shelby on the Hornets’ home floor last season was hard to swallow. Gibson had the last shot in that one. It just didn’t fall. She’d waited a year to make up for it. So had her teammates.

Shelby (22-3) hadn’t lost since November and hadn’t lost to anyone except two Charlotte 4As for a reason. Shelby point guard Maraja Pass is tremendous, super-quick and able to change directions instantly and effortlessly. She racked up 31 points in last season’s state championship game.

Pass provided a drive-and-dish offense, and the Golden Lions arrayed a collection of shooters around her, led by senior Kate Hollifield, and some hard-nosed role players.

Shelby made three 3-pointers in the first quarter, including one by Pass. The Lions led 16-13. The Hornets didn’t panic.

“We could live with them making a few outside shots,” Brice said. “What we had to focus on was limiting Pass’ penetration. We had to try to make her beat us with jump shots.”

There was almost no offense from either team in the second quarter. Second-seeded Salisbury’s scorers Bryant and Rachel McCullough were struggling and were being well-defended. Fifth-seeded Shelby (22-3) took a hard-earned 24-19 lead to the break.

“A different background here to shoot in and the backboard was really low — because I could touch it,” McCullough said. “I came in to the game not worrying about scoring. Today was going to be about defense and communication for me.”

Gibson made a huge play early in the second half that started Salisbury’s comeback. Her offensive rebound and diagonal pass back out to McCullough, got her a wide-open 3, and she nailed it. Threes in a game in which it was so difficult to score were huge.

Bryant shook loose from Pass for the bucket that tied it. Noble connected from the left corner to put the Hornets on top for the first time since the opening minutes.

It was a bruising 28-all after three quarters.

Pass came up with a four-point play, banking in a 3-pointer as she was fouled. The Hornets slid behind by five at 36-31 early in the fourth quarter.

Bryant’s lengthy 3-pointer for 36-34 with Shelby threatening to get some separation with 5:25 left to play was one of the shots of the game.

Assistant coach Andrew Mitchell had told Bryant she had to get more assertive on offense. She’s their most skilled offensive player. She answered the call.

“That one was a little far, further out than I normally will shoot from,” Bryant said. “But I knew I was going to have to take some of those.”

When Noble made a sharp pass to Morgan for the layup that made it 36-all, the teams were right back where they started.

At 38-all, Shelby milked the clock and played for the last shot. Huntley cut off Pass on a drive. She dished. The shot didn’t fall. The teams went to overtime.

The first overtime was cat-and-mouse. Shelby being extra-patient, probing for an opening. Salisbury playing defense and more defense.

With the Hornets down two, Huntley’s driving bucket made it 40-all.

When Pass set sail down the lane, threatening to win the game for the Golden Lions in the final seconds, Morgan was there waiting for her for the second time.

McCullough’s mother gives Morgan M&M’s for every charge she takes. Morgan is fearless. She’s gotten a lot of M&Ms this season.

“I’ve been taking charges since sixth grade,” Morgan said with a wide grin. We knew No. 3 (Pass) was going to drive it. I just had to hold my ground — and pray I got the call.”

She got the call. The exhausted teams headed for four minutes of double overtime.

Hollifield, who scored 14 for the Lions, hit three free throws for a 43-40 Shelby lead, but McCullough responded with the biggest shot of a great career for the Hornets.

With 1:11 left, she made a colossal shot from the left side as she was fouled. Her free throw got the Hornets back to 43-all.

Pass, who scored a game-high 16 points, made the second of her two free-throw attempts with 32 seconds left for a 44-43 Shelby lead.

Salisbury’s season came down to one possession. Bryant controlled the ball and confidently took the shot from mid-range. She missed but Morgan stayed after it. Bryant  kept moving and Morgan relocated the ball to her near the top of the key. Shelby was scrambling defensively. Huntley headed for the rim, and Bryant whipped the pass to her for the decisive layup.

Shelby still had 8.5 seconds, so the Hornets had to get one last stop. Pass gave the ball up when she was cut off, and Brooke Hartgrove, the hero of Shelby’s regional semifinal win over Randleman, had an open shot from the right corner.

Hartgrove missed, and the rebound caromed long. Huntley went high and got a hand on it. Bryant secured the ball — and the regional championship.

“We had our opportunities, and that’s all you can ask for as a coach,” Shelby coach Scooter Lawrence said. “Multiple shots, multiple chances to take Salisbury out. In regulation, both overtimes, we had chances, but we couldn’t get the ball to go our way.”

Salisbury got 13 from Bryant and 10 from McCullough.

But this one was mostly about taking charges, blocking shots and defending crazy-hard, even when the offense was sputtering.

“That was just a case of refusing to lose,” Mitchell said. “Great job by Coach Brice. Great job by the girls to keep fighting.”