Gotta Run: Pam Clark on her battle with heredity 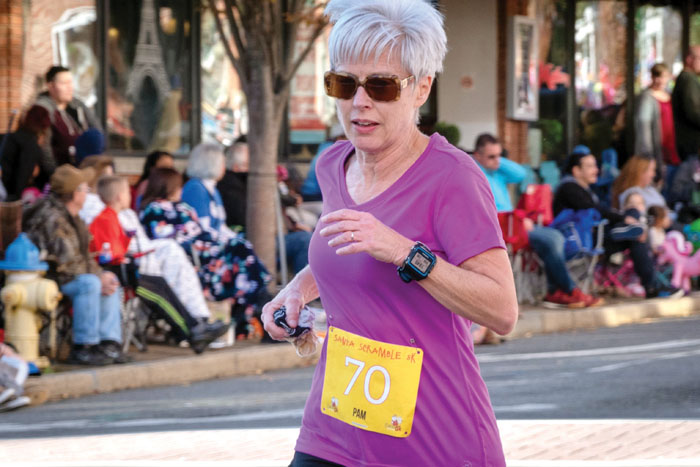 Pam Clark competes in the 2018 Santa Scramble in Concord. Photo by Steve Harding

Back in my early days with the Salisbury Rowan Runners, I met Pam Clark. I had known her brother as an excellent runner and now Pam is having a huge resurgence. Her reasons for running are noteworthy.

Pam grew up in Concord, graduating from Concord High School in 1974. She said, “I was never involved in sports and would have never been considered athletic.” Pam and husband, Steve, married four days after her graduation from high school and are now at 47 years and counting. They have a daughter, Jancey, married and living in the Netherlands with her husband, Walid Ahmed, and Pam’s five grandchildren that include Yusef, Mariam, Nour, Malak and Jude. Jancey ran track in school and Steve started running because he didn’t want her out running alone. Pam’s brother, Wesley Roberson, had been a runner for years at that point. One day in 1995, Pam decided to start running too and she and Steve joined the Salisbury Rowan Runners. The encouragement from that group helped Pam to enjoy running.

Pam said, “I had a career change in 2008 and took a break from running regularly and doing races for about six years. I worked in senior living doing activities which kept me very busy and active but still I missed running. In 2015, I joined a Couch to 5K group meeting at Dorton Park in Concord, giving me the boost I needed to get my love for running back!”

With a family history of heart and other issues resulting in early deaths, Pam relishes each day. She said, “The benefits of running for me are part of trying to live a healthy life. My dad had heart problems and had two open heart surgeries at a very young age. He died at 48 and was needing a third surgery at that time. My mom died at 39 and had many health issues that led to an accidental overdose of prescription meds. My brother, who loved running and tried to avoid heart issues, died at 52 from leukemia. My sister, after having a heart attack and bypass surgery, was diagnosed with pancreatic cancer and died within a few months at age 56. So, at 66 I have outlived my parents and siblings and I want to enjoy the life I have.”

While regularly completing 5Ks and 10Ks, Pam joined another group in Dorton Park and someone suggested they start training for a half marathon. Pam said, “Until then, I had no desire to run that distance, but we decided to do it! I was 61 when I ran my first half and now at age 66, I have run 13 half marathons! I recently joined a run in Albemarle called The Fellowship of the Idiots. It started 20 years ago with just a few people training for a marathon. This year, 400 people started at the YMCA in Albemarle, ran to the top of Morrow Mountain, and back to the YMCA. That is 19.7 miles out and back over 1,400 feet of elevation gain. I had told myself that if I finished and wasn’t in too much pain the next day, I would register for my first full marathon. Feeling better than I ever anticipated, I will be attempting the full marathon at Myrtle Beach on March 5. My only goal is to finish in the allotted time, never being one to keep up with PRs or the total mileage I have run over the years. I do have a very special plaque I received in 2001 from the Salisbury Rowan Runners for becoming a member of the 1,000 Mile Club. Now 20 years later, for 2021, I received a certificate from the Cabarrus Brewing Run Club for running/walking a total of 1,813.7 miles. When I see my grandchildren once a year, I love that I am able to be active with them and they enjoy running with me. I appreciate my group of running friends and the encouragement they give me. They definitely keep me motivated.”

In addition to running, Pam enjoys camping, hiking and kayaking with Steve, their dog Connor, and cat Mango Blaze.

Look for news on the spring Beginning Runners Class and other events at www.salisburyrowanrunners.org.