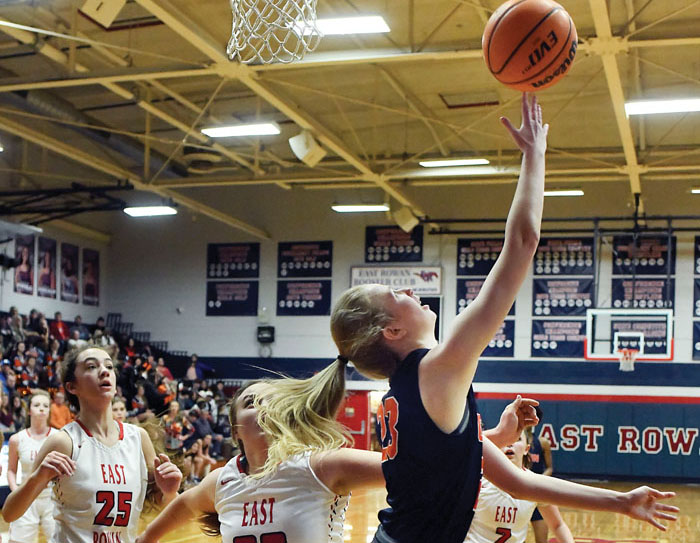 Carson’s Hannah Isley during a game against East Rowan earlier this season. photo by Wayne Hinshaw; for the Salisbury Post

Doubleheaders (girls, followed by boys) are on tap at Salisbury and North Rowan.

The only underdogs are West Rowan’s boys (at East Lincoln) and South Rowan’s girls (at North Buncombe).

West Charlotte (7-17) doesn’t have a good record, but the Lions were automatic qualifiers as the top 3A in the mostly 4A Queen City Athletic Conference.

The South Piedmont Conference team most comparable to Ledford (14-10) is Lake Norman Charter.

Ledford doesn’t score a lot (44.4 points per game), but the Panthers defended well enough to beat a 20-5 Oak Grove team in their conference tournament.

Morgan Harrison, a 5-foot-4 guard, is the leading scorer for Ledford with 10 points per game, while Aramy Grier leads the rebounding.

It’s a tough assignment for the Raiders (10-13) as they travel to Weaverville to face one of the favorites in the 3A West bracket.

North Buncombe (19-6) played in a wicked mixed 3A/4A league in the Asheville area and won nine out of 12 conference games. The Blackhawks have won their last eight outings.

North Buncombe’s standout is Karlyn Pickens, one of the nation’s top high school softball pitchers and a Tennessee recruit. She’s a shot-blocker like the Raiders haven’t seen in the South Piedmont Conference.

North Rowan’s girls got the worst deal in history last season when the pairings were drawn out of  a hat. They got Murphy, the eventual 1A champs, in the first round and it didn’t go well.

It’s a much kinder draw this year.

Hayesville (7-15) is a mountain team with a power rating similar to East Rowan and West Davidson, opponents the Cavaliers (18-8) handled pretty easily.

North has two of the county’s top scorers in Bailee Goodlett (18.2) and Hannah Wilkerson (16.7). Brittany Ellis (11.6) had a huge game in the semifinals of the Central Carolina Conference Tournament.

Surry Central (8-14) got in the playoffs despite winning two of 12 conference games and finishing last in a seven-team league.

The NCHSAA’s system for determining playoff participants is all about strength of schedule, and the Golden Eagles play in a stout league with the likes of North Surry, Forbush and Wilkes Central.

Surry Central does have a special athlete in Mia McMillen, a 5-foot-10 All-State volleyball player who uses her hops well in hoops. She averages 21.5 points and 9.1 rebounds and lit up Forbush recently for 36 points.

Queen’s Grant (19-7) has a great record for a No. 19 seed and plays in a charter school league that was ruled by Carolina International.

The Stallions are from the Mint Hill/Matthews area. They average 71 points per game and have four men averaging in double figures, led by 6-foot-3 Jaidyn Covington.

It figures to be a fast-paced game against a deep, balanced North squad.

Reidsville (10-10) isn’t the same now, but it’s still one of the most athletic schools in 2A, so this should be a good game.

The Hornets also got big performances in the conference tournament from Deuce Walker, Mike Geter and Dashawn Brown.

How good is East Lincoln? Well, the Mustangs went 12-2 in a league that also includes Hickory and North Iredell.

MaxPreps rates East Lincoln (22-5) as an equal match for Salisbury, but not as strong as Concord.

That’s good news for West, which beat the SHS Hornets and had two scraps with the Spiders.

Led by point guard Zaharee Maddox, Davie (13-10) heads to Kernersville to take on its Central Piedmont Conference rival for the third time.