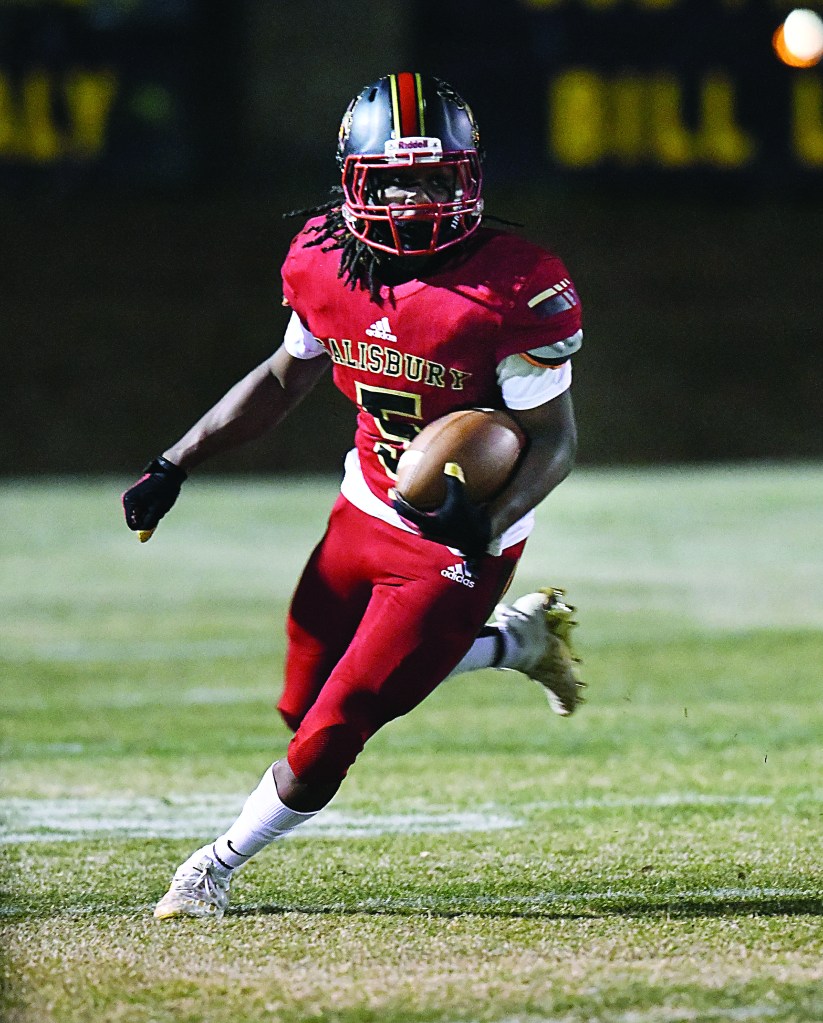 Carson has signed Salisbury‘s Jayden Gibson, who scored on offense, defense and special teams for the Hornets. File photo by Wayne Hinshaw, for the Salisbury Post

He was there to watch his son, Jalon, Salisbury’s All-America linebacker who signed with Georgia, but he was also there to do some recruiting.

Jalon, not surprisingly, was defensive MVP for North Carolina.

“But there were two linebackers wearing No. 48  jerseys who were defensive MVPs that day,” Walker said. “Jalon for North Carolina and Mekayle Burris for South Carolina. We talked to Burris after the game and bonded over those 48s. Special person and special player.”

Catawba landed Burris on National Signing Day. Walker believes the 6-foot-2, 210-pound stud from York, a multi-sport guy who also competes in basketball and track, will be a leader for future Catawba defenses.

Catawba has signed 14 players so far. Radell Lockhart, former Catawba star and defensive line coach, has taken on the duties of recruiting coordinator.

While the Indians got some athletes they really wanted from the Carolinas, they also signed five from Florida, which has become an important source of talent for the program.

“We’ve got some Florida connections with some of our assistant coaches and hopefully we’re getting a pipeline going with some Florida high schools,” Walker said.

The most celebrated and publicized recruit is probably Lyndell “LJ” Turner, a Florida running back who rushed for 11 yards per carry, put up more than 2,000 rushing yards in 6A football and had a 330-yard rushing game. He was a player of the month for the entire state.

“Our running backs got banged up late last season and that really hurt us,” Walker said. “Turner is a big addition. He’s got a chance to be a special player for us.”

Jaheim Odom, a physical, hard-hitting safety from Jacksonville, Fla., blocked numerous kicks and led his team in tackles. He could be big on defense and special teams.

“The No. 1 safety on our board for a long time,” Walker said.

Catawba got a recruit from Alabama. Cianan Williams is a 6-foot-4 receiver who can motor.

“We’ve got a lot of quick slot receivers, but Williams is a different kind of guy,” Walker said. “He’s a field-stretcher, a tall athlete who can get up in the air for those 50/50 balls.”

Tyson Resper, from Grimsley High in Greensboro, fits the slot receiver mold. He impressed the Indians in a camp and was one of the earliest verbal commits for this class. He stuck with the Indians.

Catawba landed one of the defensive linemen at the top of its want list in CJ Brown, a 6-1, 285-pounder from Catawba Ridge High in Fort Mill, S.C.

“He’s big and he can really move,” Walker said.

Locally, the Indians signed Jayden Gibson,  a defensive back from Salisbury, who scored touchdowns for the Hornets on offense, defense and special teams. Walker got to see Gibson play often when he went to watch his sons, Jalon and Deuce, play for the Hornets. Gibson’s brother, Eric, played linebacker for the Indians.

“I did see Jayden a lot, and he makes plays,” Walker said. “He can help us in a number of ways. He can cover people, he can return kicks and he’s also a guy who can go down and make the tackle on a kickoff.”

Catawba will still have Clayton Crile, who led Division II in punting. Crile was a guy who probably could have entered the transfer portal and moved on to a Division I school, but Walker said he’ll be back. He likes Catawba.

Kam Hill, a dual-threat quarterback from Reagan, near Winston-Salem, could turn out to be the most important recruit in the class.

Hill turned in monumental games against strong competition in the 4A Central Piedmont Conference. He’s extra fast and possesses a powerful arm.

Last season’s starting quarterback Ken Avent III had eligibility remaining, but elected not to return to the program.

Catawba spent a little time with zero quarterbacks on campus, but did get Charlotte 49ers transfer Preston Brown, a former West Mecklenburg  star who spent several years stuck behind Chris Reynolds. Brown will have three years of eligibility at Catawba.

Hill will be coming in to compete with Brown. Walker said the Indians hope to add a third QB via transfer and they could add walk-ons from the high school ranks for depth.

“Competition is always critical,” Walker said. “Even if you don’t win the job, you push the other guy to be better than you. We believe we’ve signed quarterbacks with the ability to lead us to a national championship.”

There have been a number of staff changes, with Everette Sands elevated to offensive coordinator. Jake Medlock, who played at Florida International, Valdosta State and in arena football leagues, is the new quarterbacks coach.

Recruiting will continue. Many more players will be added, but these 14 Indians will be the heart of this recruiting class.

“We think it’s one of our best classes,” Walker said. “As recruiting coordinator, Coach Lockhart did a tremendous job adding depth and filling needs.”