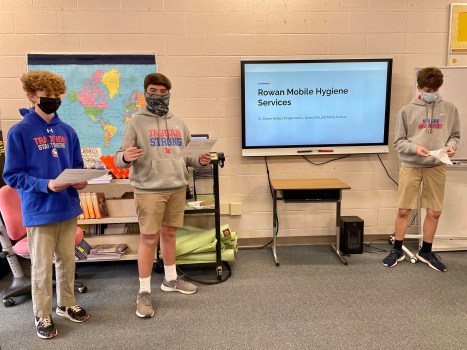 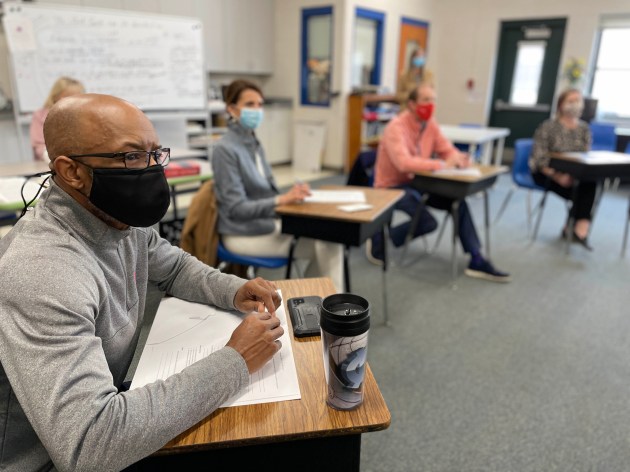 SALISBURY — Eighth grade social emotional learning students at Salisbury Academy re-envisioned Rowan County’s community and what it would look like to meet its most critical needs.

“To begin the exploration, I had the students think of unmet needs and transform their ideas into nonprofit organizations for Rowan County,” said Allison Doby, SEL teacher and director of admission for the school.

“The depth with which the students processed this challenge and the detail that they put into the projects were really exciting to witness.”

Students broke into groups and created their nonprofits while designing pitches which they ultimately presented to a guest panel. On pitch day, six groups presented a diverse range of topics and ideas for organizations:

– A Sleep Tight program providing easy-access and clean bedding to area homeless
– Bright Minds Education, an after school tutoring program to assist children with homework and encourage them on their academic journeys
– A Pop-Up Spay and Neuter Clinic to address animal health concerns and overpopulation
– A Rowan Mobile Hygiene Services unit where homeless individuals can shower, brush teeth, receive a haircut and other hygiene care in specially outfitted vehicles
– A sports program exposing Rowan County children to sports in a healthy and safe setting
– Mental Health Matters, a program to address a critical lack of accessible mental health support in our area and to be set in Bell Tower Green

Panel member Greg Alcorn, founder of the local nonprofit ApSeed Early Childhood Education, said that he found the students’ program ideas to be inspiring and gratifying.

“The community benefits directly from young people being more aware of what’s going on in the real world – the issues faced, from mental health to after school care and more — and these ideas will ultimately make the community a better place for everybody,” Alcorn said. “The students’ ideas were really beyond their years.”

For eighth-grader Baxter Heilig, a member of the Rowan Mobile Hygiene Services team, the chance to make Rowan County better was really exciting, he said.

The idea for the mobile unit came from one of Heilig’s team members as they were brainstorming ways to make the offerings of Rowan Helping Ministries more flexible from a location standpoint.

“Many homeless people don’t have a dedicated place to shower and access toothbrushes and soaps, etc., outside of a shelter,” said Heilig. “We wanted to bring that to them.”

Panel member Lauren Whaley, president of the Carolinas Credit Union Foundation, said that it was a privilege to see the minds of the eighth grade students at work, identifying and addressing issues that impact our community.

“Building and strengthening empathy extends far beyond the walls of the classroom, and this project is a wonderful example of that approach,” said Whaley.

RALEIGH – Gov. Roy Cooper has announced an extension of the policy that allows state employees to use volunteer days to help combat staff shortages in K-12 school districts across the state due to COVID-19.

The extension, through April 15, provides an additional 24 hours of Community Service Leave for state employees with supervisor approval to work in North Carolina schools as substitute teachers, bus drivers, cafeteria staff and other needed roles – in addition to the standard 24 hours of volunteer leave provided annually. The policy also continues to allow state employees to keep any compensation provided by the school district through April 15.

Some districts across North Carolina, including the Wake County Public School System, have taken steps to make it easier for state employees to volunteer in the schools, by streamlining the induction process and waiving usual fees for training or to cover the cost of background checks.

Under the updated policy, state employees are eligible to use an additional 24 hours of Community Service Leave  for time spent being – or training to be – a substitute teacher, substitute teacher’s assistant or other substitute staff at a school or school district. State employees are also eligible to use the usual 24 hours of Community Service Leave for other volunteer activities, regardless of compensation. Such leave may be used by state employees only with supervisor approval and only when it will not interfere with or delay state government operations.

SALISBURY – The Catawba Singers will present their first of two spring concerts on 4 p.m., Feb. 20

The 45-minute concert will be held in the Omwake-Dearborn chapel on the campus of Catawba College.

The choir is under the direction of Phillip Burgess, dean of the Shuford School of Performing Arts, and is accompanied by Susan Trivette, Catawba College’s Collaborative Pianist.

All audience members are asked to remain masked and socially distanced for the duration of the performance.

The event will be held on Friday at 11 a.m. in front of the new science center on campus, followed by a reception and tour inside the building.

Among special guests will be immediate and extended members of Dr. F. George Shipman’s family, including his only child, Rev. Sheldon Shipman, as well as former co-workers and local, state and national educators.

The grand opening and ribbon cutting of the new science annex punctuates the college’s growing STEM program and focus on encouraging more African-American students to major in STEM areas of study.

One of the significant highlights of the facility is its planetarium/immersion theater with SciDome IQ 2400 technology, where students have a virtual-reality experience in human anatomy, physics, astronomy and earth science.

In addition to the planetarium, the annex includes a SCALE-UP classroom that facilitates active and collaborative learning, and a hydroponic greenhouse.

Dawn McNair, dean of the Division of Mathematics and Science, is heading up the festivities that also includes two student-centered events leading up to the grand opening that will be live streamed on Livingstone’s YouTube channel.

Those attending the in-person grand opening and ribbon cutting must follow the college’s COVID-19 protocols, which includes showing proof of vaccination or presenting a negative COVID-19 PCR test within 72 hours of the event. Masks must be worn indoors for the duration of the program, but may be removed briefly for eating and drinking.

SALISBURY – Dr. Anika Goodwin, an ophthalmologist from Greensboro, created a line of healthy lash extensions after suffering from thinning lashes due to glue-on options.

Goodwin appeared on the ABC TV show “Shark Tank” last summer to pitch her company, OpulenceMd Beauty, a black-owned line of magnetic eyelashes focused on the health and safety of the eye – and walked away with a $100,000 deal from billionaire Kendra Scott.

Goodwin walked onto the stage at Livingstone’s Tubman Little Theater as keynote speaker at the college’s Passport to Entrepreneurship on Wednesday.

Passport to Entrepreneurship is one of two student-centered events hosted by Livingstone in preparation of the grand opening and ribbon-cutting ceremony of its state-of-the-art F. George Shipman Science Annex, which begins at 11 a.m. Friday.

The other event, Passport to the Future, was Livingstone’s first STEM White Coat Ceremony and featured Dr. Opeyemi Olabisi as keynote speaker on Tuesday. Olabisi is assistant professor of medicine at Duke University School of Medicine. He is poised to make major contributions to the understanding of the molecular basis of kidney disease among African-Americans.

Livingstone College has a renewed focus on its science, technology, engineering and math curriculum in order to attract more African-American students into these areas of study.

Black student enrollment in those fields is declining. According to the National Science Foundation, bachelor’s degrees in science awarded to black graduates remained flat at about 9 % from 2001 to 2016. In engineering, it declined from 5% to 4%; and in math, it dropped from 7% to 4%.

Livingstone College is offering grant-in-aid to any new student who chooses a STEM major, meaning their education is free after federal financial aid is considered.