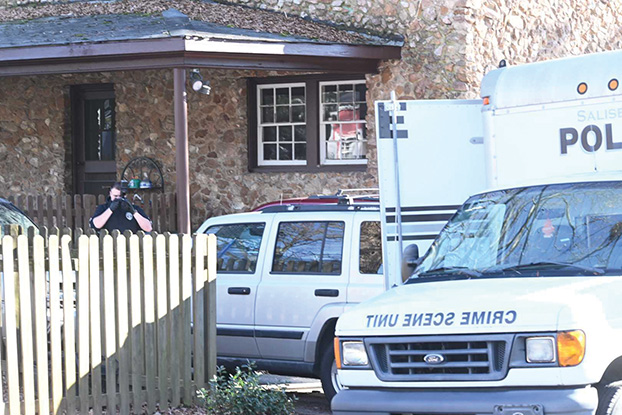 Investigators continued to collect evidence from a Maupin Avenue home after the couple living in the house was arrested on Wednesday afternoon on charges of attempted murder and felony child abuse. Josh Bergeron/Salisbury Post

Georgianna and Reed Karriker, both 42, were charged with one count of felony child abuse for neglect after their 11-year-old adopted son was brought to the hospital with sepsis, hypothermia and multiple open wounds. After a search of their home by Salisbury Police late last month, the charges facing the Karrikers have been upgraded to include attempted murder and felony intentional child abuse for inflicting serious bodily injury. Both received a bond of $300,000.

The affidavit to search the home states the boy hadn’t been seen by medical professionals since October 2020. Reed Karriker brought the boy to the hospital last month unresponsive, according to the Salisbury Police Department. That’s when a child abuse investigation started. The boy lived with the Karrikers at their 528 Maupin Ave. home and was first placed with them as a foster child in 2013.

The 11-year-old is still recovering from his injuries and will be placed in custody of the Department of Social Services, according to Lt. Justin Crews with the Salisbury Police Department. The couple’s other children are in protective custody.

Neighbors living near the couple’s house said police took the Karrikers into custody at gunpoint and used a bullhorn during the arrest. Officers remained on scene after the arrest to collect additional evidence.

During the search last month, investigators seized a lime green iPhone, one silver Mac Mini computer with a charger, one Darth Vader HP laptop with its charger, one Amazon Kindle in a brown case and one Silver Apple iPad.

Editor’s note: This story has been updated since its initial publication to include a more accurate description of the charges.