Blotter: Police looking for man who stole hundreds of dollars from restaurant’s register 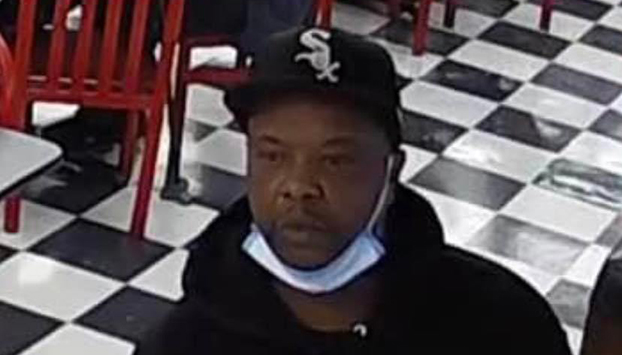 A photo provided by police of a suspect in a Checkered Flag Bar-B-Que theft.

SALISBURY — Salisbury Police are looking for a man who stole hundreds of dollars from the Checkered Flag Bar-B-Que’s cash register on Monday.

Images released by Salisbury Police show the unidentified man reaching over the counter around 3:30 p.m. Monday and manipulating a release button on the register, said Lt. Justin Crews. The suspect is wearing a dark-colored sweatshirt, a mask below his chin and a dark-colored Chicago White Sox hat.

The Salisbury Police Department said the man stole about $450 from the restaurant’s cash register and left in an unspecified white vehicle from the business at the intersection of South Main Street and Mooresville Road.

Anyone with information about the crime is asked to contact Cpl. Walker at 704-638-5333. People also can contact Salisbury Police at 704-638-5333, call Salisbury-Rowan Crime Stoppers at 1-866-639-5245 or submit tips online at tips.salisburyrowancrimestoppers.org.

• A woman reported an assault Tuesday in the 1300 block of South Jake Alexander Boulevard.

• A man reported a larceny Tuesday in the 1100 block of Terrace Drive. A report states the man let three homeless people move in. Items now appear to be missing.

• A man reported stolen power tools Tuesday in the 1200 block of Crosby Street. The total estimated loss was $640.

• A woman on Tuesday reported a larceny in the 2400 block of South Main Street. The total estimated loss was $1,200.

• Ivester Drywall and Painting reported a stolen office key and intellectual property in the 200 block of Fairson Avenue.

• Lisa Marie Sheets, 36, was charged Tuesday with felony possession of a schedule two controlled substance in the 300 block of North Main Street.

• A man on Monday reported a stolen license plate Monday in the 100 block of Roy Miller Park Road in Salisbury.

• A man on Monday reported a larceny in the 200 block of Freeze Meadow Road in China Grove.

• An overdose was reported Monday in the 100 block of Idlewheel Drive in Salisbury.

• Justin Blake Jordan, 27, was charged Monday with financial card theft in the 100 block of Liberty Street in Salisbury.