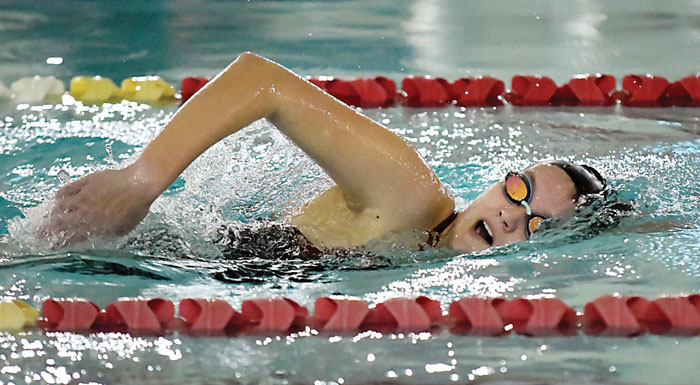 Salisbury’s Sage Huffman competes in the 100 yard freestyle during the recent county swim meet. photo by Wayne Hinshaw; for the Salisbury Post

Regional meets are scored with 20 points for first place, down to a single point for 16th. Relays were worth double points.

Huffman teamed with Lucy Heilig, Kate Burton and Ava Morris for fourth-place finishes in the 200 free relay and 400 free relay. Those relays were worth 60 points for the Hornets.

Gray Stone’s girls placed second in the regional. They were led by Riley Gleason, regional champion in the 100 free and runner-up in the 50 free.

Jack Heilig placed seventh in the 200 free, while Sawyer Burton was 12th.

Gray Stone’s boys finished sixth. Christopher Kafitz had a second in the 500 free.

Qualifiers move on to state competition on Feb. 11-12 at the Triangle Aquatic Center in Cary.

Carson’s Sever is seeded second in the 100 breaststroke and third in the 200 free.