Gotta Run: Dick Rosen, an inspiration for all 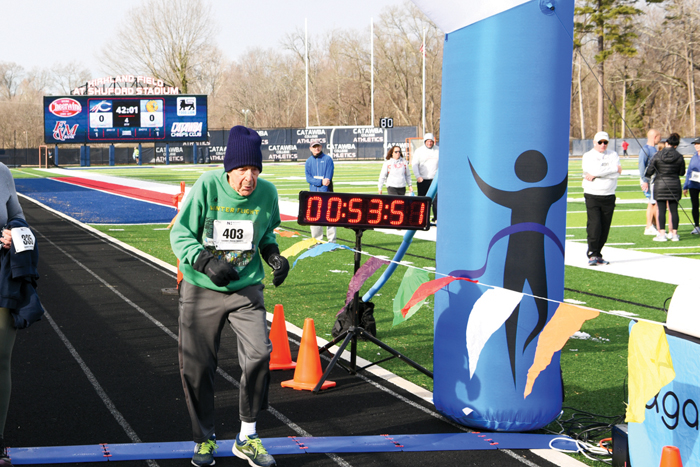 The 2022 Winter Flight races have come and gone, well, except for the aftermath which involves plenty of details to close out the event and start thinking of next year. We’ve been seeing some awesome runners come to Salisbury over the years, often memorable for this or that. One recognizable name emailed me a few weeks back and told me he was trying to establish a new 5K state record. I’ve helped with this several times and assured this runner that I would make it happen.

Dick Rosen, 91, wasn’t just trying to break an established record, he wanted to put his name on the North Carolina record books as the first one in his age group to complete the 5K distance and follow through with the timing and application requirements. The paperwork and rules are quite extensive. No one gets a record in N.C. if there is any doubt of its validity. Dick ran the 5K (3.1 miles) distance on Sunday in 53 minutes and 52.05 seconds. He’s going to keep training and come back in either April or May and try to establish his new mark

I wanted to know more about Dick. He answered my questions graciously. Dick told me that he was an avid tennis player at age 42 in 1973. He often tired at the end of matches, so he started running a mile after each one. Dick said, “After 18 months of doing that, I ran a little longer, and within months stopped tennis and increased mileage to 40 a week and began running races. In my 40s, I ran seven marathons, and raced about once a month for the next several decades.”

Dick’s best marathon time was 3:31 in Charlotte in 1978, which didn’t qualify for the Boston Marathon. He got into Boston in 1977 and 1978 as a member of the American Medical Jogging Association, with red numbers while the official Boston Athletic Association numbers were blue.

Dick said, “A highlight was when John Kelley Jr, a legend, who started behind me, caught up to me in the middle of the Boston Marathon and I sprinted to keep up with him for about a mile and absorbed the cheering directed to him.” Kelley completed 57 Boston Marathons and won two of them. He was a four-time Olympian and passed away at age 97.

Dick enjoys running while traveling, particularly around Stanley Island in Vancouver, along the Danube River, in Auckland, New Zealand, and many other destinations. He was raised in New York but has lived in Greensboro since 1966. Dick lives with sweetheart, Judy Hyman, and has three children and a stepson plus three grandchildren and a step-grandson. His granddaughter and a stepdaughter-in-law run, and one grandson skateboards four hours most days.

A regular at Salisbury’s biggest race, Dick said, “The Winter Flight is well organized and the finish on the track is delightful. The rolling terrain makes the course interesting. In the remote past, several friends from Greensboro would carpool and our camaraderie was part of the attraction.”

When talking with longtime runners, I always ask about total miles over the years. Dick said, “I tallied my miles for a few years, but stopped after an injury and never restarted. My log of races, from 1975 through 2016 covers 463 races.” He has completed the Winter Flight 8K 10 times and a WF 10-miler once.

Dick added, “Though I never was fast, I feel exceptionally fortunate to be able to continue to be active at my age. When I turned 80, there was a slow record for the 5K and I broke that by 3 minutes. There were no records for longer distances, and I set them for 10 miles and half marathon, both of which have been broken by substantial amounts subsequently.”

When asked about future goals, Dick said, “If I can find a race at longer distances where the clock will still be running when I finish and the race director is willing to do the work, I would be interested in pursuing additional records. I have covered 13 miles in a recent four-hour effort.”

The next race locally is the Will Run for Food 5K on Feb. 26 at Centenary Methodist Church. Hopefully Dick’s story will inspire some new walkers and runners to join in, not matter what their age. Complete details are available at www.salisburyrowanrunners.org.