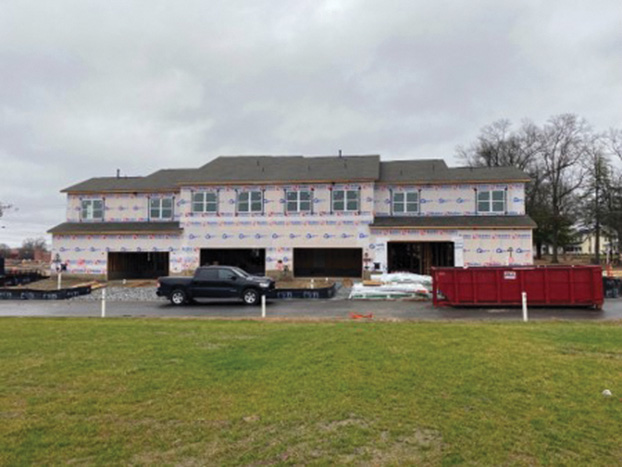 Tri Pointe is finishing construction on four model homes that will be used to market the Pennant Square community. Photo submitted.

KANNAPOLIS — Without having finished any homes yet, Tri Pointe Homes has sold 15 units at Pennant Square, a townhome community under construction in downtown Kannapolis.

“We’ve had phenomenal demand and a lot of interest,” said Matt Roesch, Tri Pointe’s vice president of sales and marketing for the Carolinas.

Tri Pointe and Kannapolis city officials broke ground on the development in April. The national homebuilder plans on constructing almost 130 townhomes on several blocks of West Avenue, with about two dozen units fronting South Main Street. Pennant Square will be integrated with the West Avenue streetscape.

Tri Pointe is currently developing two other similar communities in the Charlotte region, one in south Charlotte and the other in Mooresville.

Roesch said the company was drawn to Kannapolis because of the city’s downtown revitalization effort, which has brought shops, restaurants and entertainment to the area surrounding Atrium Health Ballpark.

Pennant Square townhomes will be for purchase and the company is primarily targeting people who are looking for a low-maintenance living option with downtown walkability, such as empty-nesters seeking to downsize.

Tri Pointe is offering three different home layouts, starting around $285,000 for a townhome with two or three bedrooms at 1,723 square feet and topping out around $360,000 for a three to four bedroom unit at 2,226 square feet. All of the models are two stories and some feature porches and small courtyards. Roesch said customers are still able to customize many features inside units, such as countertops and appliances, since they have not been completed yet.

Barring any unforeseen delays due to weather, labor or materials, Roesch expects the first four units of the community to be finished within the next two months. Those four homes will be used as models to help attract buyers.

“Once they open, we believe people are really going to fall in love with being able to walk through those homes and see what we’re offering in the neighborhood,” Roesch said.

Tri Pointe started offering virtual tours of the townhomes on its website in November. Roesch said the company has been pleased with interest so far.

“We’re seeing a strong demand out of Kannapolis of people who live in town who want to remain in town,” Roesch said. “We’re also seeing a large portion of individuals who live in the northeast region of the greater Charlotte area. We’re still seeing people all over Charlotte, even down into South Carolina, the Fort Mill area who are looking for livability.”

Tri Pointe will first finish six buildings of about 30 units on the eastern part of the community’s footprint. Those six buildings have already been opened for sale. Roesch estimates they will be ready between June and September. Based on demand, Tri Pointe will complete the full buildout of the community in sequential order with a target completion date in late 2023.

Pennant Square isn’t the only new residential community in downtown Kannapolis. Vida Kannapolis, a multi-story complex with hundreds of units, started renting its apartments months ago. Officials held an August groundbreaking on an addition to Vida that will have about 80 larger apartments. There are also plans to build 100 apartments and 80 condos in a multi-use development just beyond right field at Atrium Health Ballpark.

Even with that many residential units becoming available in the next few years, Roesch is confident Pennant Square will still stand out.

“There is demand for something new and a different housing inventory in downtown Kannapolis where our community is low maintenance where you have an ability to own your own home and the livability, but your yards are maintained, your common areas are maintained for you,” Roesch said. “The livability of that will drive increased demand. As you start to see more apartments coming, I think that drives in different buyers that will want to have housing as well.”

More information about Pennant Square can be found online at tripointehomes.com/nc/charlotte/pennant-square/.