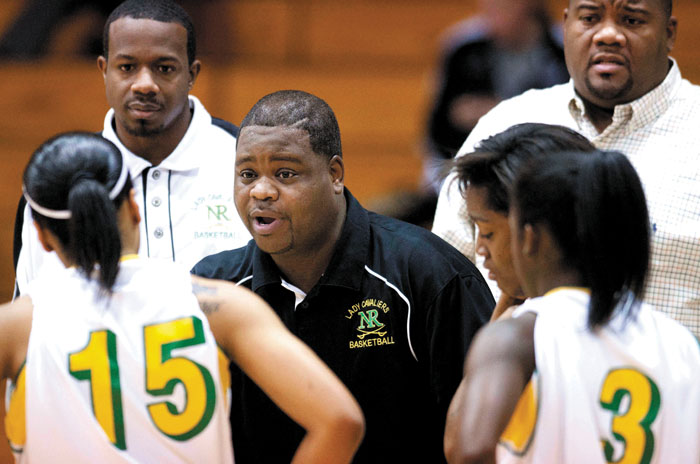 Hillian, an East Spencer alderman and civic leader, passed away on Friday night at 47.  He was known as Mr. 28039 — the town’s zip code.

There was a home game that took place in January 2012, his final season at the helm, that did say a lot about him. North Rowan was pretty bad in the first half of a Yadkin Valley Conference game against North Moore and was still behind 40-22 midway through the third quarter, but Hillian didn’t stop encouraging his team. He kept believing his girls could come back. Those girls didn’t stop believing it, either.

Pressing like crazy, the Cavaliers scored 43 points in the last 12 minutes and won 65-58. Tinka Bush had the game of her life. Freshman Demeria Robinson had a breakout. Senior Teaunna Cuthbertson did basically what she always did.

And Hillian couldn’t stop smiling for a week.

A 1993 graduate of Salisbury High, Hillian was an unusual high school student. He was still in high school when he and his uncle, Darrell Foxx, co-founded East’s Spencer’s Anti-Drug Drill Team. The drill team combined anti-drug chants with fancy dance steps and performed as far away as Florida.

Hillian went on to Shaw University, got a bachelor’s degree in business administration and a master’s in management from Strayer University.

Hillian didn’t play high school basketball, but he served as team manager for coach Sam Gealy during an era of great players, such as Bobby Jackson and Bobby Phillips, and he learned a lot about the game.

Hillian wanted to mentor and coach after he got out of college because he knew he could motivate student-athletes.

As Dunbar Center activities director, he coached AAU basketball teams, such as the Dunbar All-Stars, and he worked with the Junior Hornets and Junior Bobcats programs. He attended Livingstone College women’s basketball practices to pick up hoops pointers from a cousin who really knew his stuff — Andrew Mitchell.

Mike White was the head coach of North’s girls before Hillian. White brought in Hillian to assist him.

For the 2008-09 season, they switched roles, and Hillian became head coach of a rebuilding North Rowan program that was 2-21 the previous season.

Hillian preached the value of hard work in practice and he taught that everyone had something unique to bring to the table, whether it was boxing out, free-throw shooting, steals or blocking shots. He instilled some confidence, but that was a tough season in the 2A Central Carolina Conference. North won only four times, beating Carson non-conference twice and taking Lexington twice, once in overtime, in the CCC.

Shifting to the 1A Yadkin Valley Conference for the 2009-10 season, the Cavaliers moved up to six wins. The most memorable was a game the Cavaliers pulled out in Norwood against South Stanly. With the score tied in the closing seconds, Hillian called a play for Tiffany Brown, and she made a buzzer-beating 3-pointer for the victory.

Hillian got quite a few good games that season out of Cuthbertson, Brown and Symphony Roberts.

North kept improving in the 2010-11 season. Cuthbertson, a track and field star, blossomed into a really good player. North won nine and went 8-8 in its 16 YVC games. North would have qualified for the 1A state playoffs, but sixth-seeded South Davidson won the conference tournament and bumped out the Cavaliers.

The Cavaliers won nine games again that season, but all nine were in the YVC. They finished fifth at 9-7.

That meant that Hillian’s last game as head coach of the Cavaliers was also his first state playoff game. North lost it to Lake Norman Charter, but getting back to the playoffs was a major step for the program. Cuthbertson got to wrap her fine career (949 points) with a playoff appearance, while Robinson finished her first season for the Cavaliers, well on her way to a 1,000-point career.

The next season, under new head coach Brian Lytton, the Cavaliers added talented freshmen Aliyah Farmer and Special Washington to the roster, and they were good for a number of years.

A moment of silence was held to honor Hillian at Saturday’s Salisbury-North Rowan basketball game.