Man of many hats: Charles Sloop decorates fence with headwear 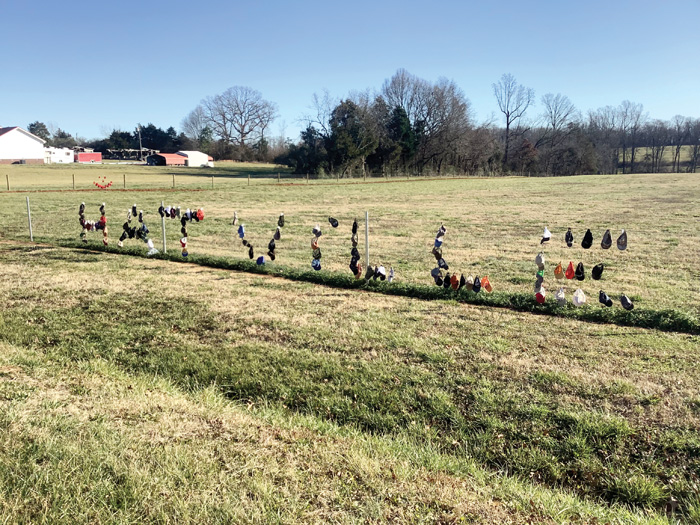 At the intersection of Hwy. 150 and Back Creek Church Road, Charles Sloop has named his display “Hatville.” Photo by David Freeze, for the Salisbury Post.

Charles Sloop needed something to do.

Charles had been in the dairy business for 43 years and in 2020 sold all his cows. Charles knew that he needed to replace the physical work of tending to those cows with something else.

With just 20 hats, Charles decided to put them on top of his new fence posts along N.C. 150 near Back Creek Church Road. His son, Ryan, built that new fence, and putting the hats on them just seemed right. Ed Hall and Linda Honeycutt showed up with more hats, and a Facebook thread gained momentum. A car with a South Carolina license plate dropped off 30 more.

Kim Crawford last year wrote to the Salisbury Post wondering about “this delightful man” and why he placed the hats. Today, Charles holds up the article and smiles sheepishly, saying, “This delightful man, of course!”

He walks the length of the fences a couple times daily, usually moving the hats around and waving to the cars that pass by. The questions in the Post also have seemed to spur Charles on for more.

When the letter to the editor published in early December, Charles’ own paper didn’t come that day. So, he drove over to Mault’s service station to get a copy and found the treasured article inside. Ryan just laughed and said, “This is dad’s thing, but it’s supposed to be a mystery. And it seems that the meaning changes every day.”

A few friends started to make fun of Charles’ addiction to the hats, and suddenly they disappeared under the cover of darkness. People began to worry, Facebook discussion ramped up and after a couple of weeks, answers had to be found. A man and woman stopped by to see what had happened to the hats. They were worried that Charles had died.

With big help from Facebook, Charles came up with a list of the 10 most likely hat bandits. There also were three alternates, just in case none of the top 10 people were the real culprit. 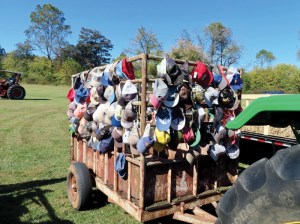 The truth was that Charles decided to take them down under the cover of darkness, just to see what would happen. With the help of neighbor Sam Corey, the hats were all removed and stored elsewhere. Charles got great delight out of the local concern over the missing hats, but he knew all along that the hats would return.

And return they did. More people started dropping off hats — one person leaving 36 of the exact same hat.

Charles is fine with plenty of the same hat, but he does have certain rules.

“My wife and I don’t see eye to eye politically. So, no politics,” he says.

A sheriff candidate’s sign showed up amid the hats and it had to be removed. People can’t buy the hats either. One lady stopped by to do that, and Charles declined to sell any of them. Some hats also won’t see the fence, including Charles’ keepsake Davidson basketball 2008 Elite Eight hat. He’s a big Davidson Wildcats fan.

“But somebody dropped off a UNC hat one day, and I was happy to use it,” he said.

Nora Sloop, Charles’ daughter-in-law, says she just tells people when they ask about Charles that her father-in-law is enjoying his retirement.

Charles estimated last week that he is up to 450 hats. An avid singer, Charles is a regular in Thyatira Presbyterian Church’s choir. So one day, a bag of hats was waiting for him in his choir seat.

Christmas season provided a new outlet for Charles’ creativity. With the help of longtime friend Jimmy Hoffner, Charles constructed a Christmas tree of hats on the top of a big round hay bale. Charles added lights, but they were solar-powered and didn’t do well.

He’s also formed Christmas-themed words with hats on his fence, including Noel, Yule and Eve. 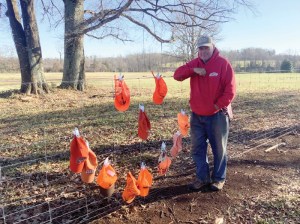 Charles Sloop with one of his “Smiley Face” designs. Photos by David Freeze, for the Salisbury Post.

“I think this is all amazing but I don’t know why. That’s Charles Sloop. The conversation is ongoing. I’ve got some other ideas to help out,” Hoffner said.

Asked if the hats are getting out of hand, Charles points to possibly his best work yet.

“I’ve spelled out ‘Hatville’ on the fence, where it’s best seen from Back Creek Church Road. ‘Hatman, just didn’t seem to be right, but ‘Hatville’ gets it done,” Charles said.

The hats have gone on tour as well. Twice a year, a local group of farmers and tractor owners take a 40-mile ride around west Rowan. In October, Charles included a pull-behind trailer displaying his hats.

One thing remains on his mind — a lady who stopped and promised Charles a pie for the hat displays.

“I haven’t seen her or the pie since,” he said.

But one person stopped by and called him “quite an artist.” Another said, “I’ve never seen anything like this.” Charles beamed at both descriptions.

Son Ryan jokes, “For 43 years, my dad was quiet and behind the barn door. Now he’s a different person! Who has he become? This is all his circus!”

Asked about his potential candidacy for the mayor of Hatville, Charles said, “We’ll have to get incorporated first!”