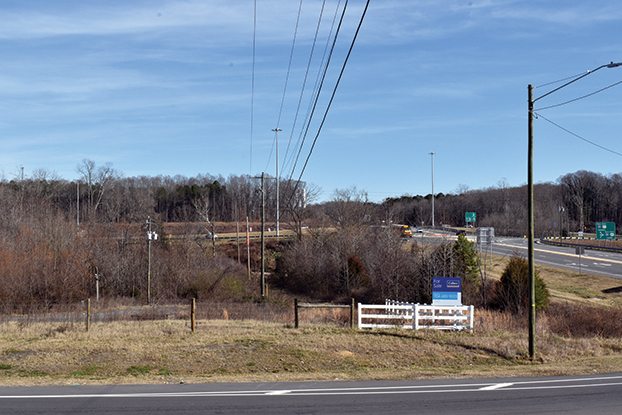 The parcel is located next to I-85, but Cornerstone has said its not interested in the land being used for industiral purposes. Ben Stansell/Salisbury Post

CHINA GROVE — Cornerstone Church is marketing roughly 37 acres of land on N.C. 152 near I-85 exit 68 to developers interested in transforming the property into a mixed-use commercial center.

Cornerstone Church is located on Webb Road and was formerly led by Pastor Bill Godair, who died in December. The church is now led by his wife, Pastor Tina Godair, his family and Executive Pastors Brandon and Tara Spiker.

The church purchased the property on N.C. 152 in 2011 for about $1.2 million. The land is located between Hope Lane and I-85. After buying the land, Godair and Cornerstone developed the vision for a multi-million dollar, mixed-use complex called “The Grove.” Plans called for “The Grove” to feature a 60,000-square-foot events center, two hotels and multiple commercial buildings. The development, planned by Richard Flowe, was to be mostly for commercial use, but it would have some tax-exempt space for Cornerstone.

“(Godair) wanted to make a lasting impact on Rowan County in the area of economics through creating jobs for those willing to work and build a better future for themselves,” Cornerstone Pastor Tina Godair said.

Godair brought his conceptualization for “The Grove” before the China Grove Town Council in 2015.

Work on the development was expected to start after I-85 was expanded from four to eight lanes because the North Carolina Department of Transportation was using part of the Cornerstone property as a staging area for the widening project. As a result, some land on the property has already been graded and is “ready to go” for construction.

With the interstate widening now complete, Cornerstone Church has a renewed interest in seeing “The Grove” come to fruition. In the time since the project was initially announced, the plan has remained mostly the same and calls for an event center, retail space, lodging, amphitheater, restaurants and more. The church is no longer committed to retaining a portion of the property for its own uses, but it would be open to the idea.

Tina said the mixed-use project would be perfect for families and the expanding population of China Grove. Cornerstone is willing to be flexible about the development of the property, but would like the plans to align with the church’s vision.

“Because we’re been a church that serves the community, we’re open to ideas that are brought to us,” Tina said.

The current vision for “The Grove” fits in with what China Grove’s leaders imagine for the property.

The property is zoned Highway Business, which generally allows for restaurants, retail and recreation. During a recent Town Council meeting, Councilman Rodney Phillips emphasized that the town doesn’t want to rezone the property and isn’t interested in light industrial uses such as a warehouse.

“The Grove” property is being listed by commercial real estate broker Colliers International.

While Cornerstone works to determine the future for “The Grove,” the church is also executing a major project at its 17 acres on Webb Road. Cornerstone is planning to construct a sports complex that includes softball and soccer fields, a children’s amphitheater, cornhole, a 11,000-square-foot playground, volleyball courts, a walking track and more. The church is working with Salisbury Mayor Karen Alexander’s KKA Architecture firm to bring the sports complex to life.

“It’s for our community,” Tina said. “We’re all about the community. We want to make it to where every time you come to Cornerstone it’s a family environment.”