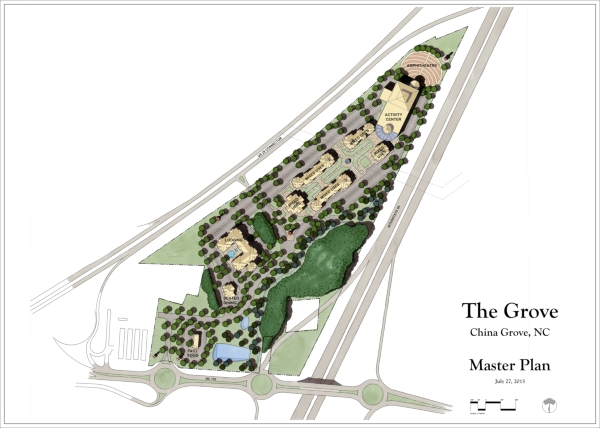 Submitted photo - Site plans for a Cornerstone Church Development Called the Grove would include an events center, mixed use space, hotels and dining. The estimated start date for construction is in 2019.

The project plans include a 60,000-square-foot events center, two hotels and multiple commercial buildings. Developer Richard Flowe estimated the project will cost between $35 million and $50 million. He said the total economic impact of the project could be more than two times the project’s cost — $70 to $100 million.

The start date of construction would be tied to the widening of Interstate 85 from four to eight lanes, Flowe said. He said 2019 is a rough estimate. It would officially open between 2020 and 2022, Flowe said.

For now, the project — entirely within the municipal boundaries of China Grove – is in the hands of the town’s technical review committee and planning board.

Mayor Don Bringle and other council members noted the significance of the proposed project. The project site is 40 acres, Flowe said. It sits within the triangular piece of land formed by N.C. 152, I-85 and U.S. 29.

Cornerstone Pastor Bill Godair said the project began with a need for expanded space for his church’s services. Godair said increasing China Grove’s tax base and creating jobs were a reason for the site’s proposed mixed-use and commercial facilities.

Cornerstone Pastor Tina Godair said she envisioned the site as a family friendly location. It would be more than just another retail shopping center, she said.

Flowe, who made a majority of the presentation to the China Grove Town Council, envisioned the site as having multiple restaurants, office spaces and two hotels. He said about 14 acres of property would be sold for commercial use. Other portions of space would be leased to private companies or used by Conerstone Church.

Near the end of the Conerstone Church presentation, Mayor Pro Tem Lee Withers questioned how much of the space would be tax-exempt.

China Grove on Tuesday also considered eliminating an ordinance that required an additional fee be paid to the town for commercial developments. Called the Adequate Public Facilities Ordinance, it was intended to help ease financial stress on China Grove for major developments and provide money for schools and police and fire coverage.

Withers said The Grove may put a strain on China Grove’s staff because the town is preparing to eliminate the ordinance.

Responding to Withers’ question, Flowe estimated the complex would be 80 percent commercial or mixed-use and 20 percent tax-exempt nonprofit — used by Cornerstone Church.

Bringle asked how the development might affect road layouts on the western side of U.S. 29. Bringle said the N.C. Department of Transportation had developed plans to put a roundabout where U.S. 29 and N.C. 152 merge.

Flowe said Department of Transportation staff had talked about placing a stop light at the point where the two roads merge. However, Flowe said he was hesitant to say with certainty what might occur.

The site where The Grove is proposed would be the subject of significant traffic work when I-85 work begins — estimated for 2017. In addition to the interstate widening, the Department of Transportation is proposing to create a full interchange at N.C. 152 — currently traffic can only exit the interstate northbound and enter the interstate southbound — and change the road layout where U.S. 29 merges with N.C. 152.

Flowe said contractors would use the proposed site as a staging area during I-85 construction work. Construction on The Grove would begin immediately after.