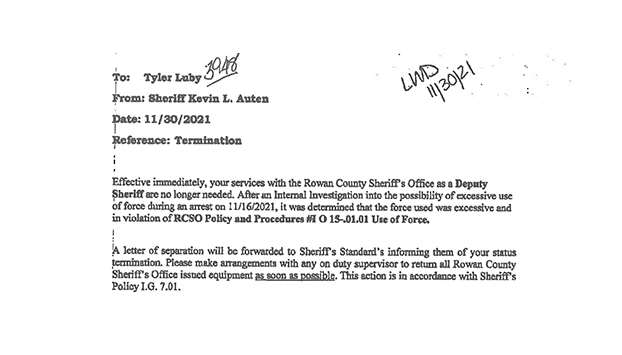 A section of the termination letter addressed to Luby.

SALISBURY — The Rowan County Sheriff’s Office fired a deputy on Nov. 30 for using excessive force during an arrest, according to a termination letter obtained by the Salisbury Post through a public records request.

The termination letter, addressed to Tyler Luby, 27, said the deputy violated a Rowan County Sheriff’s Office policy related to excessive force during an incident on Nov. 16, but the letter does not specify the exact actions Luby took.

The letter was signed by Sheriff Kevin Auten and asked Luby to return all Sheriff’s Office-issued equipment as soon as possible.

In the Nov. 16 incident, two people were arrested after a sheriff’s deputy was dragged for 50 feet and another lost a ring finger during a chase that started at Food Lion on Statesville Boulevard. Luby was not one of the injured deputies.

Both remain in jail — Massey with a $1 million bond and Hamby with a $35,000 bond. In Massey’s booking photo, a bandage is wrapped around his head. 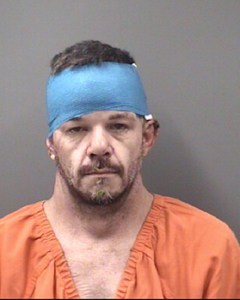 The chase started around 11 p.m. on Nov. 16 when two deputies pulled into the rear parking lot of the Food Lion on Statesville Boulevard and observed a rented 2021 Volkswagen Passat turn on its headlights and drive away.

After deputies attempted to make a stop, the incident report stated Massey’s vehicle dragged a deputy about 50 feet as it fled the scene. The deputy received injuries to his head, knuckles, wrists, fingers, elbows, knees, right ankle and right shoulder.

Highway Patrol troopers used spike strips on the Passat. A deputy attempted three pursuit intervention technique (PIT) maneuvers on the vehicle before the last was successful. As law enforcement officers forced Massey to the ground, a deputy’s left ring finger was amputated, but the incident report didn’t provide details about how that happened.

In November, Ramsey said the Rowan County Sheriff’s Office said deputies received information prior to the chase that Massey intended to try and commit “suicide by cop.”