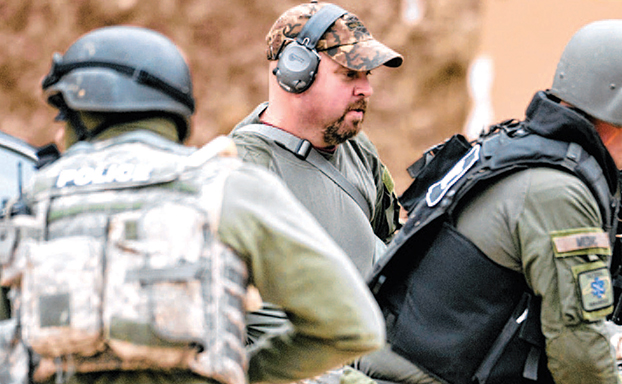 Rodney Mahaley is pictured in this Salisbury Post file photo during a training exercise when he was employed by the Salisbury Police Department.

SALISBURY — The circumstances leading to felony charges for a former Rowan Sheriff’s Office supervisor were “not a secret” and produced an “awkward situation” in the department, says Travis Allen, an investigator who’s running for sheriff.

Allen first made the comments in a Dec. 12 video posted to his campaign’s YouTube account and restated the same in a phone call one week later with the Post. Allen, a Republican candidate for sheriff, said he made the video to respond to a letter to the editor published in the Post and to provide campaign updates.

In the video, Allen briefly spoke about charges against Rodney Mahaley — a lieutenant in charge of the Criminal Investigation Division until retiring just before being indicted. Mahaley was a supervisor in Allen’s chain of command. He’s accused of possessing a stolen gun for years before being charged.

“It was not a secret to anybody at the office,” Allen said. “That was a very awkward situation over the summer and into the fall. … Nobody at the sheriff’s department at all liked that situation.”

Allen defended the integrity of the Criminal Investigation Division and said the sheriff, not individual investigators, had the authority to take action against Mahaley.

In a phone call with the Post, Allen said anyone facing a criminal investigation should be placed on administrative leave. Allen also said his comments weren’t condemning the actions of Sheriff Kevin Auten.

Asked about the case, some Rowan County sheriff candidates expressed a similar opinion — that law enforcement officers facing criminal charges should be put on leave.

While a statement released Nov. 9 by the Rowan County Sheriff’s Office says Mahaley was suspended while the State Bureau of Investigation handled a probe into the stolen gun, his personnel file shows no such suspension. He retired Oct. 29 and was indicted the following week.

“What occurred with Mahaley was not a suspension as a disciplinary measure, and did not result in any loss of pay,” said Kelly Natoli, assistant county manager and Human Resources director. “That is the only information I can give out that is a matter of public record.”

Republican sheriff candidate Greg Hannold leads the Rowan County Detention Center and is a member of the department’s command staff. Hannold declined to comment on the validity of the criminal charges and defended actions by the Rowan County Sheriff’s Office, Chief Deputy David Ramsey and Sheriff Kevin Auten.

“Our reputation within the community dictates that we do everything in our power to be transparent and open,” Hannold said. “I believe we have done that by addressing it quickly once we knew of the accusations. We allowed someone other than our own officers to investigate so that there was no appearance of inappropriate or incomplete investigation. The decision was made to prosecute, or not prosecute the case by an outside office to avoid the appearance of preferential treatment.”

Mike Caskey, a Rowan County commissioner, Charlotte police officer and Republican sheriff candidate, spoke generally when asked about his thoughts on the case, saying he’s only aware of details reported by news outlets.

“If you believe an employee might have committed a crime, obviously you need to have that person on leave,” Caskey said. “If they end up getting charged, you don’t want them working on other cases during that time.”

Brad Potts, a retired state trooper and Republican candidate, questioned whether someone should be allowed to retire if he or she is the subject of a criminal investigation and said, “I still think you should be put on some kind of leave if you were going to be charged.”

Potts said he’s worried about how the criminal charges could affect any previous investigations awaiting a court verdict. He also said law enforcement officers should be held to a higher moral standard than the general public and lead by example.

Jack Eller, a businessman and Republican candidate, said Mahaley is innocent until proven guilty in court. Eller said the stolen gun case could have been handled earlier, internally and without charges being necessary.

Mahaley legally purchased a .22-caliber rifle valued at $375 in January 2017, but it became the subject of a criminal investigation one month later, according to a Sheriff’s Office statement and court documents. A Rowan County Sheriff’s Office investigator working on a case involving the rifle in March 2017 told Mahaley, the investigator’s immediate supervisor, the gun was stolen. It was never returned, and he was promoted in 2019, according to court documents and his personnel file.

Carlton Killian, a Democratic candidate for sheriff, said the charges against Mahaley were surprising.

“Things do happen, but that circumstance basically surprised me,” Killian said, adding that no one is guilty until it’s proven in court.

Killian didn’t offer a specific prescription about how he’d handle the case as sheriff.

Simon Brown, another Democratic candidate for sheriff, declined to comment until he can read more about the Mahaley case.

Randall Livengood, who previously declared a Republican run for sheriff, said he no longer plans to do so.

Filing for offices on the 2022 ballot is currently paused because of court cases over legislative and congressional district lines. Several Rowan County sheriff candidates started their campaigns in early 2021 after finding out Auten planned not to seek re-election.

Editor’s note: This story was updated at 10:20 a.m. on Dec. 28 to clarify the type of personnel action taken when Rowan Sheriff’s Office administrators became aware of the stolen gun case.