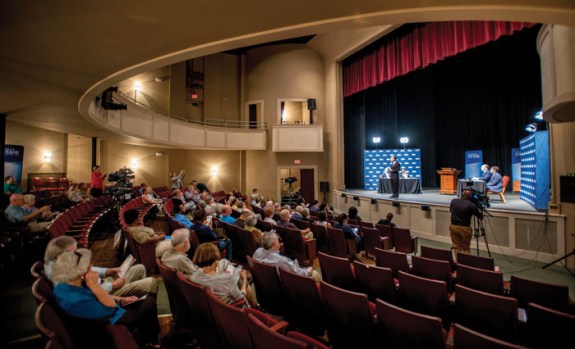 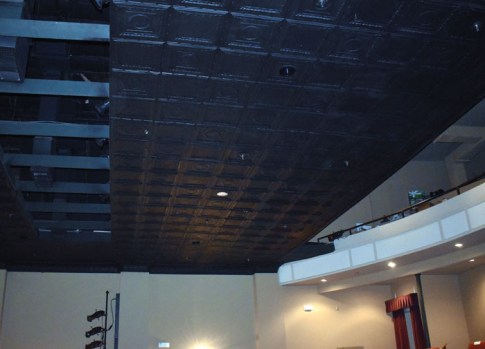 The ceiling improvements in the Meroney might not be noticed by most patrons, but the repairs were critical to ensure that the theater-going experience is of high quality. Ben Stansell/Salisbury Post

SALISBURY — Eric Slipp is a believer in the performing arts.

Not only has Slipp acted on stage with Piedmont Players, but he also serves as the local theater company’s treasurer.

Plays, musicals and other productions can inspire, help people shape their world views or provide a much-needed escape, Slipp said. But only if there is a place for them to be performed.

“It can’t happen if we don’t maintain our facilities,” Slipp said.

That’s why Piedmont Players decided during the pandemic to move forward with ceiling repairs and repainting inside the Meroney Theater, one of two theaters the company owns downtown. The historic venue connects directly to the Norvell Theatre, the second theater owned by the company that focuses specifically on youth-productions.

The much-needed ceiling repairs at the Meroney were primarily funded by a $10,000 grant from the Salisbury-Rowan Community Foundation, which announced nearly $300,000 in grants distributed to local organizations earlier this month.

The Meroney Theater has long been a cultural center in Salisbury. It was built in 1905 at the cost of $75,000 by Dr. Leroy Meroney and his sister Lena. At the time, Salisbury was on a railway line that serviced communities from New York to Atlanta. Leroy and Lena built the theater with the idea that easy rail access and a shiny new venue could lure traveling companies to town and turn Salisbury into a cultural hub.

After changing ownership and names several times, the venue transitioned into a movie theater. Movies were shown there until 1989, when Hurricane Hugo caused major roof damage and left the theater inoperable for several years.

Piedmont Players purchased the Meroney in 1992. The company spent three years and $1.8 million restoring the languishing venue before it opened to the public with a performance of “Jesus Christ Superstar” in 1995. Shows have been performed in the Meroney ever since.

About a half-decade ago, Piedmont Players noticed the ornate black tin tiles hanging above the theater’s seats were beginning to deteriorate. The coating on the tiles preventing glare from stage lights was beginning to peel.

“It would be a little bit disconcerting for a paint flake to fall down on your lap during a play,” Slipp said.

The project was put off until the COVID-19 pandemic shut down live performances, giving the Piedmont Players the perfect opportunity to bring scaffolding and construction equipment into the theater.

The work was carried out over the course of a few weeks in September. A team of three or four worked diligently to replace the coating. The Piedmont Players considered replacing the tiles entirely, but decided to preserve the original ceiling as much as possible. Work was done on the roughly 300 tiles above both the balcony and floor seats.

The work on the ceiling was completed well before the Salisbury-Rowan Community Foundation announced its grant recipients. Slipp said the theater completed the repairs without having the funding in hand because it needed to take advantage of the pandemic-included downtime.

Piedmont Players performed under the refurbished ceiling for the first time when they debuted “Some Enchanted Evening” in October.

The ceiling improvements have likely gone unnoticed by most patrons since, but Slipp said that’s not necessarily a bad thing. One patron who did notice the work was Alfred Wilson, who owns a construction company and has completed numerous historic restoration projects in and around Salisbury.

“That Al liked it was a meaningful compliment because he’s someone who absolutely knows and would recognize it,” Slipp said.

When Piedmont Players did find out they would receive $10,000 for the ceiling repairs, there was a feeling of relief. Like many businesses and nonprofits across the country, the pandemic forced the company to be more conservative financially.

“We really hoped that it would come through because the work needed to be done,” Slipp said. “Otherwise, it would’ve required us to pay for it out of our operations.”

With the ceiling complete, Piedmont Players will now look toward the next maintenance project to keep the Meroney in top shape to host performances for years to come.