In re-election bid, Edds, Klusman and Greene look to build on progress together 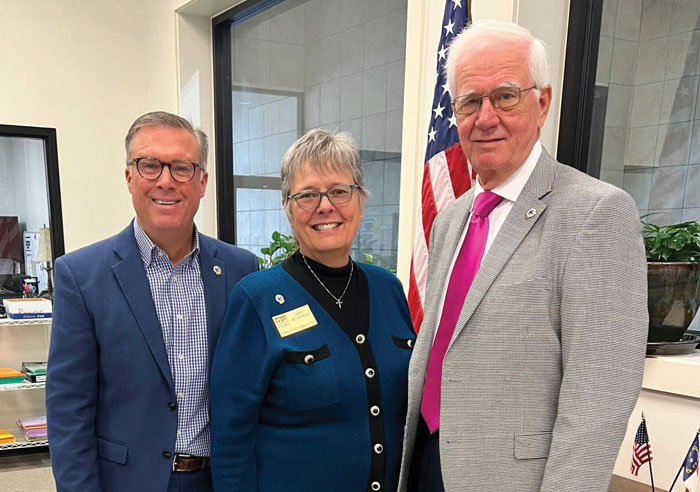 Greg Edds, Judy Klusman and Jim Greene visited the Rowan County Board of Elections office together on Monday to file for re-election to the Board of Commissioners. Photo submitted.

SALISBURY — Greg Edds, Judy Klusman and Jim Greene visited the Rowan County Board of Elections office as a group on Monday to officially file for re-election to the Board of Commissioners in 2022.

“We went up together because we’ve been serving together, accomplishing together and rallying folks together,” Edds said.

When they ran for election in a crowded race in 2014, the three didn’t campaign as a unified group. Edds and Greene, both insurance agents, were the top vote-getters in the election and were elected to public office for the first time. Klusman, who finished third, was running with more than a decade of political experience from her time in the Wisconsin state legislature.

The three were inspired individually to run because they wanted to take the county in a new direction.

“When we were elected in November of 2014, Rowan County was facing a long list of difficult challenges,” states a joint news release from Edds, Klusman and Greene. “Leaders from across the county immediately rallied together and began to build a comprehensive framework aimed squarely at improving Rowan’s County’s future.”

As they served their first terms on the board together, Klusman said they quickly formed a connection and found themselves pushing for similar goals.

“I would just say that the three of us have worked so well together from the beginning because we are all servant leaders,” Klusman said. “Our heart is in the right place and I’m proud of the people I serve with.”

While they gelled together on the board, each has focused on their own passion projects. Klusman, also a member of the Rowan County Board of Health, has been keyed in on health-related and social services matters. Edds has focused on promoting economic growth and job training programs. Greene has been involved in improvements to the county’s park system and economic development.

“We’ve all got our niches, which is really kind of cool,” Klusman said.

After four years on the board, Edds, Klusman and Greene also filed together in 2018.

The trio is largely running on what they say they’ve accomplished over the past seven years.

“I just think folks will look at our track record and what we’ve done and I think that speaks for itself,” Greene said. “We have done quite a bit in my opinion.”

In particular, the trio touts their support of the Rowan Economic Development Council, which focuses on helping existing businesses expand and bringing new economic projects to the county. They see the arrivals of several large companies, such as Chewy, as evidence that the investment in the Rowan EDC has paid off.

“We’ve expanded the tax base,” Greene said. “We have done that and have not had to raise taxes. I’m proud of the work we’ve done. I think we’ve done what the citizens elected us to do.”

Edds said the county’s revenues have grown from $134 million when the trio was elected to $171 million in the current fiscal year budget, which is a 27.6% increase.

The commissioners are also highlighting their support of a county-wide marketing branding strategy that included all 10 municipalities. Additionally, they are proud of their efforts to facilitate the construction of the new West Rowan branch of the Rowan County Public Library.

Edds, Klusman and Greene say they want another term to see through the projects that are currently underway. That includes the transformation of West End Plaza into an agricultural center that will also serve as a meeting and events venue. Greene said the redevelopment of the former Salisbury Mall would make the space a much more “usable” facility.

Each of the commissioners has their own platform for the campaign as well. If re-elected, Edds said he would like to support the county’s municipalities as they “blossom.” The chairman also said he’d like to focus on workforce development, which he believes will be the “silver bullet” that will land the county more economic development projects.

“The community that solves workforce development will rule the world,” Edds said.

Greene is keen on overseeing the development of Woodleaf Community Park. The county has developed plans to build the park in phases, but progress has stalled because the county missed out on a Parks and Recreation Trust Fund grant.

Klusman said she would like to assist in the Health Department’s move to West End Plaza, which would give it more space. Additionally, Klusman said she wants to help bring a crisis center to Rowan County that would give drug users a play to detox instead of having them sent to jail or the hospital.

Edds, Klusman and Greene are running in the Republican primary. Angie Spillman, who filed Wednesday, is the only other Republican candidate who has entered the race. However, Alisha Byrd-Clark has filed to run as a Democrat. Byrd-Clark currently serves as the education vice chair on the Rowan-Salisbury School Board. Her term on the school board runs through 2024.

Rowan County Commissioner Mike Caskey has filed to run for sheriff. Caskey’s term on the board runs through 2024.

Filing for the primary ends at noon on Dec. 17. For questions about filing for office, contact the Rowan County Board of Elections at 704-216-8140 or visit its website at rowancountync.gov/elections.