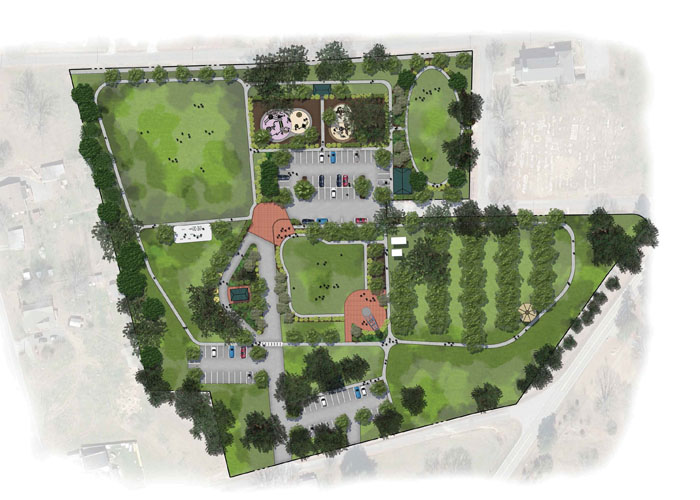 WOODLEAF — Plans for Woodleaf Community Park will be delayed after Rowan County was not awarded a North Carolina Parks and Recreation Trust Fund grant.

“We were not fortunate enough to get the matching funds we requested to further develop the park out more so,” Parks and Recreation Director Don Bringle said. “We, of course, are continuing to look at what our resources are.”

Since its inception in 1994, PARTF has distributed matching grants to local governments for parks, public beach access and improvements in state parks. A nine-member citizen board called the Parks and Recreation Authority vets applicants and allocates funds each year.

The county was depending on a PARTF grant to jumpstart the Woodleaf Community Park project, which is estimated to cost over $1 million. The park will be developed on the former site of the now-demolished Woodleaf Elementary School.

The Rowan County Board of Commissioners approved a masterplan for the park in March. Developed by McAdams, the plan separates the park’s creation into three manageable phases.

The first phase calls for the implementation of trails, playground equipment, signage and enhanced planting. The second phase includes a parking lot and restroom facilities. The third and most ambitious phase calls for an amphitheater, large civic green, more parking lots, shelters, gardens, an outdoor exercise area and more planting.

Commissioners approved the county’s PARTF application just before the submission deadline in May. The application, facilitated by McAdams, requested $354,346 from the state to complete the first two phases of the park. Commissioners set aside the same amount of matching funds in the current fiscal year budget.

“If we got the matching grant, we would’ve been able to do a phase one, phase two,” Bringle said.

The Parks and Recreation Authority announced this year’s recipients in late September, awarding over $5 million in funding to 14 projects across the state. Rowan County was one of 58 municipalities who applied for $19.3 million in funding.

The last Rowan County project to receive funding was Bell Tower Green, which was awarded $350,000 in 2019. Other Rowan County parks that have benefited from PARTF funding include the Lake Corriher Wilderness Area, Dunn’s Mountain and Granite Lake Park. Bringle said the application process is competitive and that receiving funding is never a sure thing.

“In the past, we’ve been turned down also,” Bringle said. “This is not the first time we haven’t been successful in being able to receive a grant from the PARTF foundation. I think our average has been pretty good.”

Bringle and McAdams are going to conduct a postmortem examination of the county’s PARTF application in an attempt to identify any inefficiencies. The county plans to apply for funding when the application window reopens next year. The county will also work with McAdams to explore other potential funding sources, Bringle said.

Although the county didn’t receive a PARTF grant, Bringle said the parks and recreation department will move forward with the relatively low-cost creation of a trail network at the park site.

“Not having that amount of money and still trying to sit on these funds, I want to at least create some fitness activities for the community in the Woodleaf area at a minimal cost without having to really pull a lot of funds we have allocated for a grant opportunity,” Bringle said.

Bringle encourages any Woodleaf residents with questions about the park to reach out to him directly at 704-216-7818 or by email at Don.Bringle@rowancountync.gov.