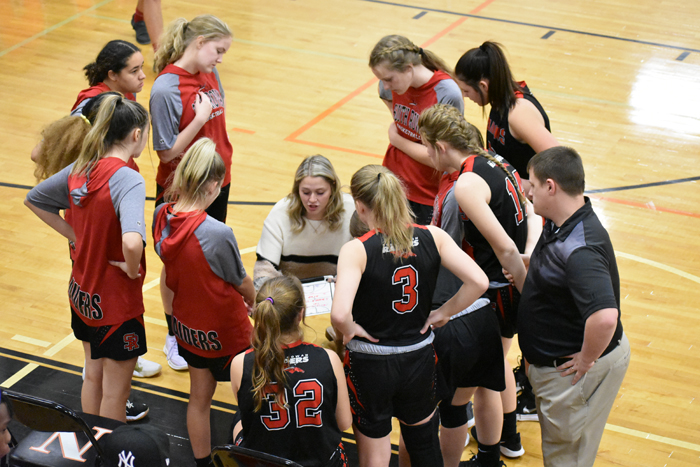 “She made three 3-pointers and did a great job of attacking the basket,” Carson head coach Brooke Stouder said.

Carson was 12-for-13 from the foul line and was able to hold off the Falcons, who made a big run in the third quarter. 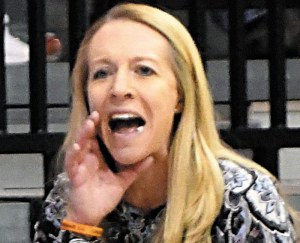 Carson coach Brooke Stouder said, ‘There’s something to be said for finding a way to win when you’re not at your best.’ File photo by Wayne Hinshaw, for the Salisbury Post

“It was an ugly basketball game and we certainly didn’t play well,” Stouder said. “But there’s something to be said for finding a way to win when you’re not at your best.”

The Cougars led 15-10 after a quarter and held a 26-18 edge at halftime against the foul-plagued Falcons. West standouts Lauren Arnold and De’Mya Phifer had three fouls each at halftime.

Phifer and Arnold scored eight each in the third quarter as West rallied. Carson’s lead was down to a single point after three quarters, but the Cougars finished strong.

“We did some good things — the solid foul shooting and we took three charges,” Stouder said. “We played hard and we really fought, we’ve just got a lot to work on.”

Phifer scored 20 for the Falcons. The Cougars had a tough time staying in front of her. Arnold and Makaylah Tenor scored 10 each.

Emma Clarke rolled an ankle in the second quarter but was able to return to action.

The Mustangs led 37-8 at halftime.

Mariah Barrie scored 24 points to lead Central Cabarrus to a 48-42 win against Lake Norman Charter in SPC action on Tuesday.

CHINA GROVE — West Rowan’s boys basketball team built a big lead and held off Carson 62-54 in the South Piedmont Conference opener for both teams on Tuesday.

Carson hasn’t won a game yet, but rallied from a 33-17 halftime deficit to make things interesting. West needed free throws from Kayvone Norman and Elijah Holmes to seal victory.

Only five players scored for Carson (0-5, 0-1), but four were in double figures. Jay Howard had 14 points, with Cam Burleyson and Mikey Beasley getting 12 each. Emory Taylor scored 11.

East stayed in it for a quarter, but the Spiders moved ahead 35-19 at halftime and buried East with a 31-point third quarter.

It’s the fewest points scored by the Raiders since the famed stall game of 2003 when the Raiders lost 26-18 to a West Forsyth team that was led by All-American Chris Paul.

North Rowan’s home games with West Rowan scheduled for tonight have been postponed.

North Rowan’s Central Carolina Conference openers against South Davidson won’t be played at North and may be postponed.