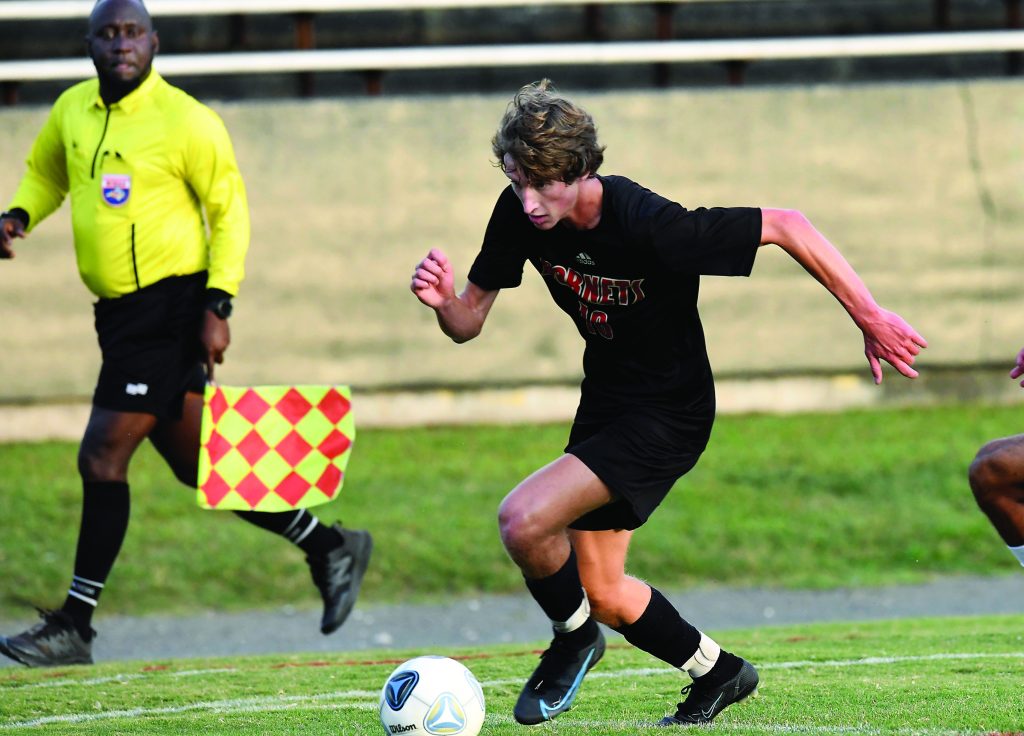 Salisbury's Will Webb is an All-State pick by the North Carolina Soccer Coaches Association and is the Post’s Rowan County Player of the Year. File photo by Wayne Hinshaw, for the Salisbury Post

SALISBURY  — Will Webb is an all-round athlete who has the wheels to help Salisbury High in a half-dozen sports, but he chose soccer as his focus.

“It was because of that thrill that comes from scoring a goal because there might be only one in a soccer match,” Webb said. “When you score a run in baseball or make a shot in basketball, that’s great, but it’s more critical when you score in soccer.”

The athletic gift that the senior is blessed with is speed. Soccer gave him the best chance to apply it.

An All-State pick by the North Carolina Soccer Coaches Association, Webb is the Post’s Rowan County Player of the Year.

A case could be made for his talented teammates Colin Donaldson, Bryan Avilez or Wade Robins, but Webb paced a 20-3 team with 26 goals and added six assists.

Salisbury won three playoff matches, but the match from the fall of 2021 that will be remembered longest was the wild 5-4 victory in early October against West Davidson that essentially settled the Central Carolina Conference championship. Webb stood tall in that one with a hat trick in a monumental struggle that Salisbury coach Matt Parrish described as one of the most exciting ever at Ludwig Stadium.

“The only hat trick I’ve had, so definitely one of my favorite games ever,” Webb said.

Perhaps the weirdest element of that night was that Webb was dealing with an injury for the first time.

“I had a back problem, and I had to get cleared to play in the match,” Webb said.

Salisbury fell behind 3-1 at halftime. Webb had scored for the Hornets, but he placed the halftime deficit on his shoulders because he’d failed on a penalty kick.

“I felt like I’d let everyone down,” Webb said. “I was really frustrated at halftime and just decided that we weren’t going to lose because I hadn’t converted that PK.  I was going to give 110 percent in the second half. I was going to do it for my teammates.”

The rest is history. Webb made the cross to Donaldson for 3-all. That was a Donaldson header that Parrish said was one of the all-time goals for the Hornets and the prettiest of the season.

Webb scored for a 4-3 Salisbury lead. It was 4-all with two minutes left.

That’s when Donaldson found Webb, who left-footed the deciding goal into the back of the net.

“Some of Will’s biggest nights came in the biggest matches, including that effort against West Davidson that helped solidify a championship,” Parrish said. “He is unassuming and doesn’t actively seek the spotlight, but he never shies away from that big moment either.”

Webb discovered soccer about the time he started school, but he was interested in just about every sport then.

“I was playing a lot of basketball and I was playing on baseball travel teams,” Webb said. “It was around the seventh grade that I made a commitment to soccer, decided to prioritize  soccer, and started playing for a club team out of Lake Norman.”

Will’s cousin, Sutton Webb, a senior who is the star of Salisbury’s girls team and a Georgia recruit, is a few months younger than Will.

“We’re close in age, but she was always playing at a higher level than I was,” Will said modestly.

A busy summer caused Webb to miss soccer tryouts prior to his freshman year, and he spent that season on the Salisbury jayvee team.

He didn’t become a varsity starter until  his sophomore season was well under way. He had six goals and four assists.

In his COVID-shortened junior season, he was beginning to shine with seven goals and eight assists in just 14 games.

“Senior year, I wasn’t really thinking about a breakout or anything like that, but I did want this to be a special season,” Webb said. “A lot of these guys, we’ve had a bond through soccer since childhood. We’ve always pushed each other to be better, and this was the last time we’d get to play together.”

Webb didn’t score on opening night, but in Salisbury’s second match, a comeback victory against West Stanly, Webb scored the tying goal on a set-piece header and the go-ahead goal on a penalty kick. The breakout was officially under way.

“I feel like Will played with a lot of pressure to score on him all season long, but he never shied away from that responsibility,” Parrish said. “His speed and his soccer acumen are off the charts. When you combine that with size, athleticism, and being a dangerous finisher, you have a player that affects every match.”

Word spread that the he was piling up goals.

Webb got more defensive attention as the season went along.

“It was kind of funny because we’d watch film of teams, but then when we’d play them, they’d adjusted their defense and there would be a guy we hadn’t seen marking me,” Webb said. “They’d put their fastest guy on me. Sometimes I wouldn’t score, but we had plenty of other guys who could.”

Webb knew he could trust teammates such as Donaldson, Avilez and Daniel Cuevas to score.

In the match that officially clinched the CCC title against East Davidson, the Hornets countered off a Robins save, and Webb scored a critical goal.

In his final CCC match against Lexington, the win that finished a perfect league season, Webb scored twice. He scored in the first 30 seconds of the match and again in the first minute of the second half. Talk about setting the tone.

It was quite a season for Webb and his teammates.

“I guess the thing I wish more people understood about soccer was how physical it can be,” Webb said. “Some of those collisions on 50/50 balls, it’s not that much different from  football.”

Webb has enjoyed a versatile athletic life that includes success as a bass fisherman.

He plays golf for the Hornets and can shoot in the 70s.

When Salisbury’s baseball team was shorthanded last spring, Webb was one of the athletes who came to the rescue. He was a starter, usually at third base, and held his own in the CCC.

During the recent football season, he was the holder for Robins’ extra points. At Lexington, he ran in a 2-point conversion on a fake.

Now he’s a member of the Salisbury basketball team.

But it’s soccer that claimed his heart many years ago.

Now it’s soccer that has brought him accolades.

“Will was instrumental in our success over the past two seasons and he had to be accounted for in every contest,” Parrish said. “He was a fantastic teammate and he gave everything he had to them in every single match.”