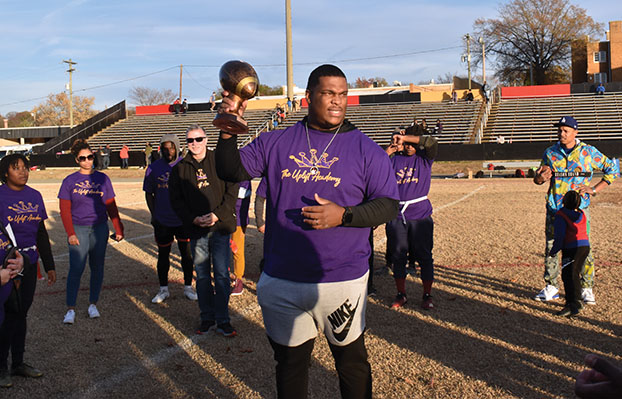 Scotty Robinson holds up the trophy awarded to the winner of Uplift Academy's flag football fundraising game. Robinson is one of several community leaders who started Uplift Academy, which is a youth-intervention program designed to combat gang recruitment and influence. Ben Stansell/Salisbury Post

SALISBURY — Community members competed on the gridiron at Salisbury High School Saturday in a flag football game that will help the area’s at-risk youth.

“With an uptick in crime here recently in the past year with our juveniles, the thought process was to create opportunities between community members and community leaders and our youth to provide opportunities and outlets to deter them from some of the behaviors that have put them on our radar as those who could benefit from some extra attention,” said Scotty Robinson, a Salisbury police officer and member of the Uplift Academy committee.

Uplift Academy is led by a five-person committee composed of community leaders, including Salisbury-Rowan NAACP President Gemale Black, city of Salisbury communications specialist Kaisha Brown and Salisbury Police officers Shaneesha Smith, Shakya Jackson and Robinson. The academy was only created about two weeks ago, but its leaders hope it will have an impact for years to come.

Anyone 18 years and older was allowed to participate in the co-ed flag football game for a $30 fee. Each competitor was split onto the purple or black team, who squared off in two 20-minute halves of action. The score of the game was kept on the stadium’s scoreboard, but the game was more about boosting community engagement than keeping count.

“We wanted to have that fellowship time,” Black said. “It’s not about always taking them and doing something, it’s also about having fun. Football is fun.”

A handful of food vendors were also set up on the sideline in addition to the Salisbury Police Department’s Neighborhood Ice Cream Express Truck, which is used to boost interaction between officers and citizens.

Money raised from the flag football game will help fund Uplift Academy’s first youth retreat. Early next year, Uplift Academy will take a group of students from North Rowan and Knox Middle School to Atlanta for an extended weekend.

“The intent is to remove them from a setting and, on a one-on-one basis, find out what we as community members can provide to them to assist them with making better decisions,” Robinson said.

“We want to expose them to life outside of Rowan County to show them that there are bigger and greater things for them if they change their thought process and decision making,” Robinson said.

In addition to the 2022 retreat, Robinson said Uplift Academy plans to host more events like the flag football game to connect youth with adults in the Salisbury area who can provide guidance.

“Everybody in the community knows her on a personal level,” Smith said. “Most of the community has her personal cellphone number, so if they hear something or see something, they’re not going to just pick up the phone and call 911, they’re going to call her and give her a tip because she’s created that relationship with them.”

Thompson, who joined the Salisbury Police Department immediately after graduating from Appalachian State, said she was pleasantly surprised to receive the award.

“It means a lot,” Thompson said. “It’s heartwarming knowing the connections I’ve made in the community, that they would think enough of me to give me such an honor.”

Next Generation Sports Academy, an upstart youth sports organization, was also recognized during the football game for starting up an initiative for children during the pandemic.