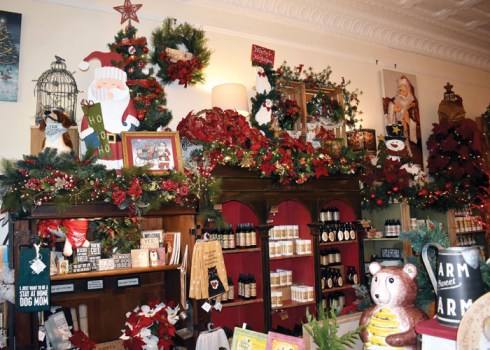 Old Town Soap Company's China Grove store is known for its Christmas decorations. By moving its manufacturing process to a separate building, the company will be able to more efficiently keep its shelves stocked. Ben Stansell/Salisbury Post. 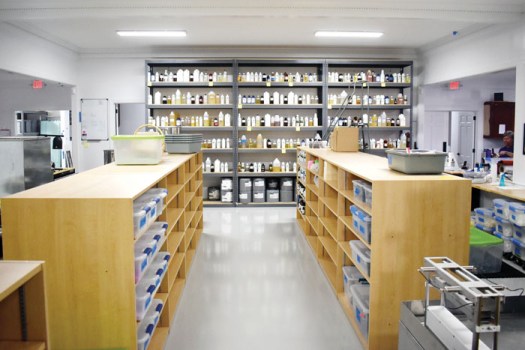 What used to be a funeral home chapel is now storage space for soap-making ingredients. The pews have been replaced by shelving units and the alter by a wall of various scents. Ben Stansell/Salisbury Post. 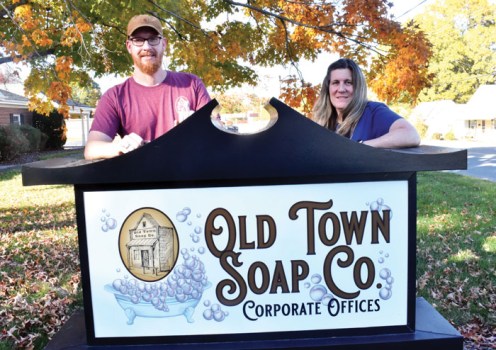 Brent and Beth Engelhardt stand by the new sign advertising their corporate offices in Landis. The husband and wife have helped grow their soap business to two stores, an online shop and several wholesale clients. Ben Stansell/Salisbury Post 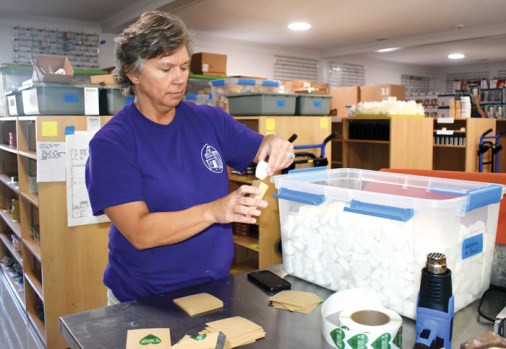 They didn’t expect to find it in a former funeral home.

The husband and wife duo are the owners of Old Town Soap Company, which Beth started as a home business around Christmas in 2010. The company has been on an upward trajectory since, outgrowing two stores in downtown Salisbury and eventually relocating to Main Street in China Grove. Last year, Old Town Soap opened a second location on West Avenue in Kannapolis.

The company has expanded its offerings too, now carrying hand sanitizer, bath bombs, candles and other aromatic items — all products that have been in high demand since the pandemic started.

“We were able to weather the storm and actually even grow in what we were able to make in the essential goods field,” Brent said. “We went from four employees at the start of 2020 to 12 at the end of last year and now we have 16.”

With two stores, an online market and a long list of wholesale clients, Brent said the company couldn’t continue to make soap at its China Grove shop.

“It was getting a little tight in the 450-square-foot manufacturing space at our China Grove location, so we needed to take a step up,” Brent said.

Brent and Beth identified the ideal space in what was once a secondary location of Linn-Honeycutt Funeral Home at 716 S. Main St. in Landis, conveniently located about midway between China Grove and Kannapolis. The move allowed the company to gain 5,000 square feet in office and manufacturing space.

At first, Brent said it was difficult to picture their soap-making operation inhabiting a former funeral home. But once they started to renovate the building, the vision became a bit more clear.

Old Town Soap replaced the carpeted floors, redid electrical infrastructure and even moved a few walls. With the makeover complete, the inside of the building is almost unrecognizable from its past life. The company has already filled the space with soap-making equipment, fragrant bottles of ingredients and shelves on which to store their products. About a half-dozen employees might be in the building on any given day, forming bath bombs or pressing labels onto bottles. There are a few offices too, where Brent can focus on the back end of the business.

The new facility has a children’s room, complete with a TV and games, which gives employees the ability to bring their kids to work when there’s no other options.

“We’ve got moms with kids and if a mom has to make $15 an hour to break even taking their kid to a $12 an hour daycare, what’s the point?” Brent said. “You’re working extra hard to be away from your kid. How about I give you a reasonable wage and you can bring your kid to work and be a mom at the same time when duty calls.”

There’s also plenty of space for the soap shop’s two dogs, Sadie and Baxter, to lounge around.

Minus an Old Town Soap sign by the road, the outside of the building looks mostly the same. However, the aromas of peppermint, lavender and cinnamon can be smelled before even entering the doors.

Although Old Town Soap is still settling into its new “corporate offices,” Brent said the extra room has been nice, especially as the company gears up for what is typically its busiest season: Christmas.

“All those people in that one little space making all of that product got to be a challenge,” Brent said. “We weren’t going to make it through another Christmas struggling.”

Having just made yet another move, Brent said he doesn’t expect any more expansion in the near future. But that could always change.

“We say no to nothing and we’re constantly on the lookout for situations that fit our mode of operations,” Brent said. “If something was to open up, maybe, a great retail space in an old downtown. I’ve always had my eye on Mooresville.”

More information about Old Town Soap can be found online at www.oldtownsoapco.com.