Heinicke doing it his way in Washington 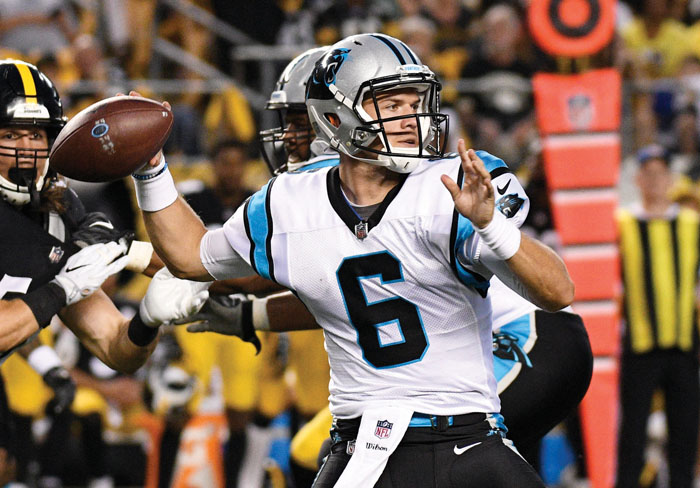 Taylor Heinicke got his first career start when he was with the Panthers after Cam Newton went out with a shoulder injury. (AP Photo/Don Wright, File)

ASHBURN, Va. (AP) — Taylor Heinicke had a cooler full of Bud Lights waiting for him after a big win against Tom Brady and the defending Super Bowl champions.

Three days later, he shuffled through pizza boxes and walked away emptyhanded when veggie was the only option left. Oh, and he was wearing a Bud Light hoodie on this “Victory Wednesday.”

Heinicke is far from the prototypical franchise quarterback in the NFL, but he’s trying to show Ron Rivera he can be his own version of that for Washington. Beating Brady and the Buccaneers was a good step, and now comes the challenge of facing the guy he calls “the god of Charlotte,” Cam Newton, and the Carolina Panthers.

Growing up a Green Bay Packers fan, Heinicke would imagine what it was like for those players to face “Superman Cam,” and draws from his own childhood excitement playing Madden video games now that he’s the one in the spotlight. He doesn’t shy away from the attention — or a big hit if he needs to take one to score a touchdown or pick up a first down. It’s that swagger that has made Heinicke popular among teammates and fans.

“I feel like I play my best when I can just be myself and be passionate, emotional,” Heinicke said. “I think some of the guys feed off of that.”

Heinicke’s star grew in Washington’s playoff loss to Tampa Bay last season when he surprisingly got the nod in place of injured veteran Alex Smith. That was his second pro start, the first since three years ago for Rivera with Carolina.

“He has improved a lot, and we’re seeing it,” Rivera said of Heinicke’s growth since 2018. “He’s playing with a lot more confidence. I think his decision making is getting better, obviously, and I think with him it’s just a matter of getting reps and opportunities.”

Heinicke is now 10 starts into his career, which looked a year ago like it was over. The Old Dominion University product was taking online classes to finish his degree and wished for one more chance to play football.

That came as Washington’s so-called “quarantine quarterback” last season and has evolved into Heinicke replacing Ryan Fitzpatrick as the starter, and fending off Rivera favorite Kyle Allen to keep the job. He completed a career-high 81.3% of his passes against the Buccaneers, threw for a touchdown, and led a 19-play, 10:26 drive — the most time-consuming in the league this season — to seal the 29-19 upset.

“Coming off that game, it’s a big confidence booster,” Heinicke said. “When you win a game like that against a defense like that, it makes you believe that you can do that against anybody.”

Heinicke’s belief is also part of his persona. Players have told Rivera that having Heinicke in the huddle makes them feel like they have a chance.

“Taylor Heinicke’s swag is something that you don’t quite see until you see it,” said top receiver Terry McLaurin, who has caught four of Heinicke’s 12 touchdown passes this season. “He has that quiet confidence about him where he walks on the field and it’s like he knows what he’s doing.”

That confidence comes through after a big play, like his 20-yard TD pass to DeAndre Carter in the Tampa Bay game. When Washington players see Heinicke flex, McLaurin said they can “feel that confidence oozing from him.”

The same thing happened after Heinicke dived for the pylon in the wild-card loss in January. Chase Young looked at TV cameras and pointed to the name plate on Heinicke’s jersey as a way of making it clear who was leading Washington.

There’s no mistaking that now, with Heinicke continuing to make a name for himself.