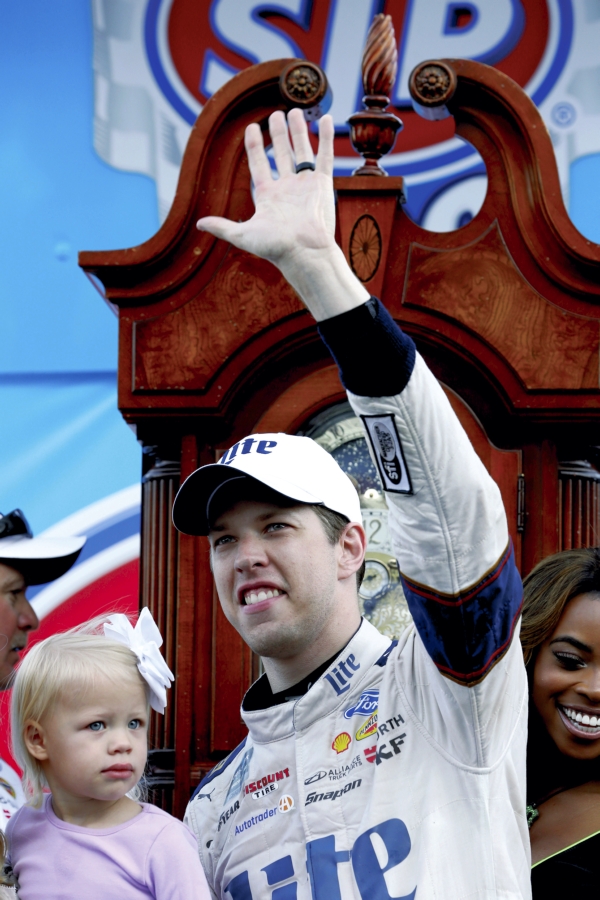 Brad Keselowski will drive the No. 6 car and as for the team. Jack Roush will ‘keep one hand on it for a while.’ (AP File Photo/Steve Helber)

CONCORD — During a Tuesday morning speech to his new race team, Brad Keselowski told the assembled group something Jack Roush’s father had taught him as a child.

“He said the right thing, and it is one of the things my dad used to say, that in a leadership position you never ask anybody to do something you wouldn’t do yourself,” Roush told The Associated Press. “He indicated to the team that it was his determination not to have somebody do something Brad knows he wouldn’t do himself.”

And with that, Roush knew he’d made the right decision to sell a piece of Roush Fenway Racing to the 2012 NASCAR Cup Series champion.  Keselowski’s addition means a rebranding of the team, which will be known as RFK Racing going forward.

The new name is actually Roush Fenway Keselowski Racing but “we are not naive enough to think that anybody will ever write that or say that based on the length of the name,” said team president Steve Newmark.

Roush, Keselowski and Newmark left the race shop after the team meeting and headed a few miles down the road to Charlotte Motor Speedway, where the new name and team logos were unveiled. Keselowski will be behind the wheel of the green and black No. 6 Ford Mustang he unveiled for a NASCAR test of the Next Gen car.

The color scheme is based on the green symbols of parent holding company Fenway Sports Group, best known for its ownership of the Boston Red Sox and the Liverpool soccer club. The rebranding of the team’s flagship No. 6 was the first change to its imagery in two decades.

Keselowski said they wanted the number to honor Mark Martin, the Hall of Fame driver who Roush built his NASCAR team around.

“The 6 car has been in this sport now for almost 30 years with Jack Roush and I think you see this car, it pays some homage to the 6 logo. It’s inspired by the original 6, which means a lot to me with Mark Martin and what he’s done to get this company started as a driver,” Keselowski said.

But he said the rebrand “is more than a fancy new logo.”

“It’s an acknowledgment to our heritage, a renewed commitment to our people and a stake in the ground that says we are here to operate top-tier race teams in the sport of NASCAR for decades to come,” Keselowski said.

RFK Racing will field two Cup teams in 2022 with Keselowski in the No. 6 Ford Mustang and Chris Buescher in the No. 17 Ford.

Matt McCall, crew chief for Kurt Busch the last several seasons, will move to RFK to run Keselowski’s car. Scott Graves will lead the No. 17 team and Buescher. The duo won the 2015 NASCAR Xfinity Series championship together and Graves took over Buescher’s Cup program with five races remaining this season.

Keselowski said signing Buescher to a contract extension was important to him joining the team because he believes Buescher can compete in better equipment. Roush drivers have not won a Cup race since 2017.

But Keselowski believes the team will have cars that can contend for the victory.

Roush, a NASCAR Hall of Famer, turns 80 next April and believes Keselowski will get his prized race team turned around.

“I want to continue the dream of being competitive in NASCAR and it is certainly something I’ll stand on the balls of my feet to help as much as I can as long as I can,” Roush said. “I’ve been besieged by questions over the last decade of what my plan was for retirement, and I really couldn’t see how I was going to be able to back away from it without having the kind of approach that Brad has brought.

“I’ll be able to back away some and not go to all the races and not be the first one on top of the pit box and the last one in my car to go home as I’ve been in the past,” he said. “I enjoy passing the baton to Brad. Steve questioned me if I was really willing to do that and I said, ‘Well, as long as I can keep one hand on it for a while it will work for me.’ ”