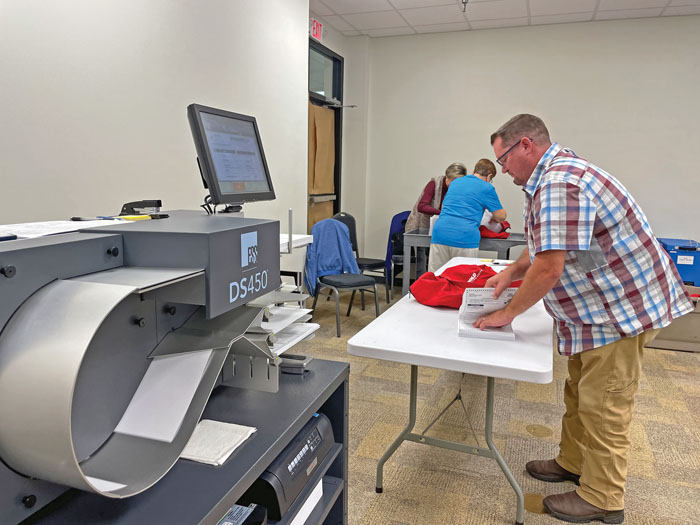 Natalie Anderson/Salisbury Post — Kris Kingsbury, a part-time elections assistant, helps feed ballots from the 2021 municipal eleciton into a DS450 central scanner and tabulator during a recount of Salisbury and East Spencer races Tuesday.

SALISBURY — Mayor Karen Alexander on Tuesday said she wasn’t surprised results of a recount in the 2021 mayoral race gave her another term in the city’s top spot.

The recount was conducted using a DS450 central scanner and tabulator. A bipartisan group of part-time elections assistants handled ballots, fed them into the machine and provided board members with tabulation totals. 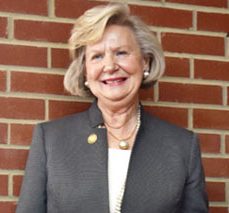 Alexander said she didn’t expect Tuesday’s recount to change the results of the race, especially given the “fabulous reputation” for the quality of work done by the Rowan County Board of Elections. She said she’s always pledged to serve everyone in the community.

“So there won’t be anything new there,” Alexander said. “I’ve always said I’m the people’s mayor, everyone’s mayor. It just makes me happy that our citizens were engaged and they took notice and made their decision ultimately on my record.”

When Rowan Board of Elections Chairman John Hudson announced there were no changes to the tallied votes or outcome, Heggins congratulated Alexander and wished her good luck. Heggins told the Post she was glad the recount occurred because it’s important for the public to have complete trust in the election.

“It was important to count and be very deliberate about each and every vote,” Heggins said. 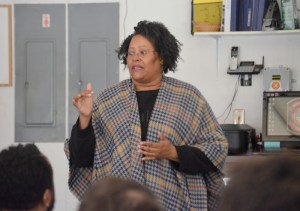 Al Heggins talks to a group gathered at the Scotch Irish Fire Department who were in attendance to hear about broadband connectivity. Shavonne Walker/Salisbury Post

Heggins added that she’ll continue to work in the community because “that’s just what I do.” Additionally, Heggins said she’d be happy to serve on any city board or commission if appointed to do so.

“I’m just very appreciative of all the people who bestowed confidence in me and gave me their vote,” Heggins said. “I just look forward to us all continuing to support our city and do the work that needs to be done.”

Heggins thanked her “phenomenal” campaign staff as well as her husband, Isaac, who has been supportive throughout the entire process.

In another recount conducted Tuesday, Tony Hillian, an alderman in East Spencer who ran for re-election, was declared the winner of the third and final seat up for grabs. Alderman Albert Smith submitted a request for the recount after finishing just one vote behind incumbent Hillian in the election.

There were no changes to the outcome of either race or the vote tally after Tuesday’s recount.

Overall, 7,326 votes were cast across the county in the 2021 municipal election, which represents 18.06% of eligible voters. That includes all votes cast by Election Day, absentee by mail ballots and five provisional ballots. The total of absentee by mail ballots cast across the county was 125. The total number of provisional ballots cast is 26, with only 12 of those resolved and counted.

Heggins said this 2021 election in particular showed a clear indication that “every vote counts.”

“People have to understand that their vote really is their voice,” Heggins said. “It’s their power.”

Alexander said the turnout and close margin in the mayoral race shows people are interested in local elections. The newly elected mayor said she was excited to see “energized” campaigns across the county.

Alexander added she’s excited about serving with the newly elected council. The new council will include incumbents Tamara Sheffield and David Post along with newcomers Harry McLaughlin Jr., who owns McLaughlin’s Grocery, and Anthony Smith, a pastor at Mission House Church. Sheffield finished first among all candidates, with 2,918 votes, followed by 2,620 votes for McLaughlin, 2,547 votes for Post and 2,314 votes for Smith.

“I think we have a very diverse city council and that’s going to be really exciting for our community,” Alexander said. “I think we’re well-represented.”