Gotta run: Running pays off for Webb on soccer field 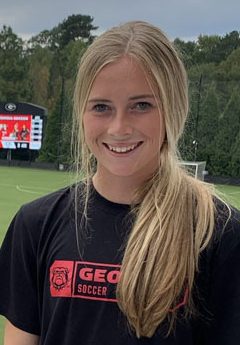 Sutton Webb will play soccer at the University of Georgia. —  Submitted photo 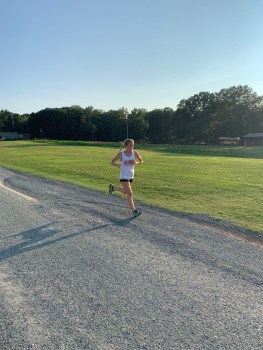 Sutton Webb placed second at the 2A Midwest Regionals in Dobson. Submitted photo

Sutton Webb began playing soccer when she was 3 in a Salisbury Parks and Rec league.

“I remember that our practices consisted of us trying to kick over as many plastic cones as possible before my teammates could get to them,” she said. “Not much soccer was involved.”

Moving up to competitive soccer at age seven, Sutton instantly fell in love with the sport, and it has been her focus since. She played with FCCA, then moved up to Lake Norman Soccer Club and finally to a massive club called Charlotte Independence. Sutton is now in her final year in that league and will conclude her soccer career this spring at Salisbury High School. Next year, Sutton will compete at the NCAA Division 1 level at the University of Georgia. An official signing will happen soon.

I had read about Sutton’s soccer success and really wasn’t surprised when she became a cross country runner during her sophomore year. Sutton said, “I was a late addition to the team. They needed another girl runner before the season started and I was recruited by Mrs. Pittman. I had minimal experience besides running up and down the soccer field every day. I ran track my eighth-grade year at Sacred Heart Catholic School but nothing like cross country.”

Usually, a new runner doesn’t achieve immediate success, but Sutton broke that mold by quickly becoming a factor against more seasoned runners. She said, “With the little experience that I had running, I was surprised with my success to some extent, especially since it came pretty quickly. Having played sports my whole life, I am a very competitive individual who is always looking to be successful. Knowing that I was new to cross country, I decided to push myself every day to become the best runner I could possibly be. I believe this year that my work has finally paid off.”

Sutton’s best moments in cross country have included qualifying for the state meet as a junior and then being named county and conference runner of the year, finishing second in the region and running a 5K personal best of 20:51, all during her senior season. She raced at the state meet in Kernersville on Saturday, posting a time of 21:29.07 for 27th place in the 2A division.

Sutton continued, “Soccer, track, and cross-country complement each other as they each allow me to continue to improve and be successful in the other. Cross country keeps my stamina at its best for soccer, especially important since I have been recruited to play wingback in college which requires playing both offense and defense on the field. Track, on the other hand, has helped improve my sudden bursts of speed that are used constantly on the soccer field. Running has helped keep me in shape and although I am not motivated to run at times, I know it is shaping me into a better athlete. Besides the fitness piece, running has also helped me create lifelong friendships in which I am extremely thankful for.”

Sutton’s other main interest is working out. Early this year, she joined the Ultimate Athlete gym in Charlotte, where she can likely be found when not on the soccer field or running. Sutton enjoys spending free time with family and friends.

Thankful for each of her family members, Sutton says each of them have been always involved with her athletics. She said, “My dad is John Webb, a local dentist, and he will occasionally run with me. Jamie Webb, my mom, is a patient care coordinator at Hearing Solutions in Salisbury. She is always there cheering me on from the sidelines. My brother Lucas is twelve years old and also very involved in sports. He plays soccer, basketball, and track and field and is a stud in all three. I strive to be the best role model I can be for him every day.”

Already, the Rowan County Female Athlete of the Year as a junior, the future is very bright for Sutton Webb. Spring sports are just ahead where she will balance both track and soccer with the cooperation of her coaches. In track, she’ll run the 100 meter, 800 meter, 1600 meter races and multiple relays. Not bad for a girl who first began running to fill out SHS’s cross country team.

The Clean Water 5K will take place at Grace Lutheran Church on Saturday, and the Girls on the Run graduation celebration 5K is set for Sunday. Find these and other upcoming events at www.salisburyrowanrunners.org