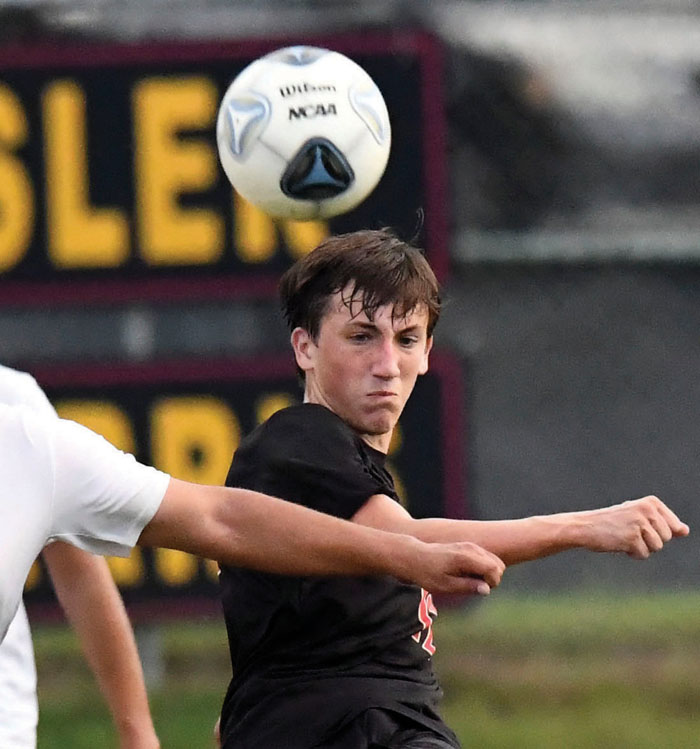 Colin Donaldson’s penalty kick with 4:45 left provided the game-winner in a tense, second-round matchup in the 2A state playoffs.

The game was moved up from Thursday due to weather concerns.

Third-seeded Salisbury (19-2) had beaten 14th-seeded East Davidson by 2-0 scores twice during the regular season, but this one could have gone either way.

“From a positive standpoint we were resilient and we overcame adversity,” Parrish said. “We played through some injuries to key guys and we showed a lot of guts and fortitude under high stress and constant pressure.”

“We came out quickly and caught them on their heels initially,” Parrish said.

The Hornets took a 1-0 lead to the break.

The action intensified with 17 minutes left to play when Freddy Mejia scored on a free kick for the Golden Eagles (12-6-1).

East Davidson’s Justin Banegas answered with a counter goal with 10 minutes left for 2-all.

Then Donaldson’s PK after a handball in the box and a Wade Robins save with 1:35 left pushed the Hornets into Round 3.

“We were thoroughly dominated for serious stretches of the match,” Parrish said.  “East Davidson played with a lot of heart and controlled much of the action. They kept the ball and found multiple quality opportunities that were either saved by Robins or pushed wide of the frame. To be honest, I don’t know if we deserved to win and I don’t think they deserved to lose. I know there is an old adage that it is incredibly hard to beat a good team three times in the same season and tonight proved it. When I think about our three contests this year, it is blatantly apparent that East Davidson got better and better each time. I have the utmost respect for their guys and for their coach, Jordan Beck. They were all class, even after the match.”

The Hornets play on. They’ll still be at home on Monday.

“Surviving and advancing is part of any playoff run and tonight epitomizes that fact,” Parrish said.
TENNIS
SALISBURY — Salisbury’s season ended Wednesday with a 5-1 loss to Hendersonville in the West Regional final.
Doubles weren’t needed.
Hendersonville (17-0) will play Research Triangle for the 2A state championship.
Emily Frick won 6-1, 6-0 at No. 6 for the Hornets (19-1). She beat Reece Redden.
Millie Wymbs lost to Olivia Purnsley 6-1, 6-3 at No. 1 singles.
Eliza Perry topped Abby Campion 6-3, 6-1 at No. 2 singles.
Lindsay Bull beat Abbey Lawson 6-0 and 6-1 at No. 3.
Ramsey Ross won 6-1, 6-0 against Kate Burton at No. 4.
Ava Heffner won 6-2, 6-1 against Ellison Frick at No.5.